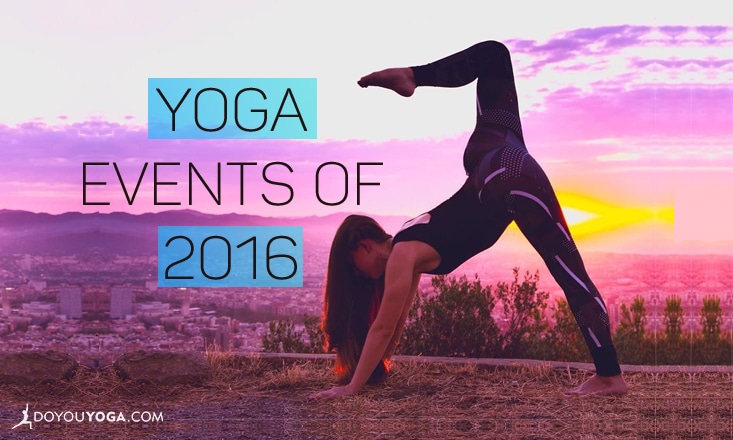 2016 hit hard. Bordered by the election and scattered with shootings, every month took a different turn. Never before has yoga been so needed to heal and decompress.

In the aftermath of these events, meditation circles and free yoga flows were gathering all across America. We had some hard conversations. We faced some deep, fundamental concerns. And we learned that our practice has a way of getting us through it all while we become more aware of the tensions and tragedies in both our communities and in our own hearts.

So before the year comes to a close, let’s take a look back at some of the yoga events of 2016

Yoga was officially inscribed as an important expression of India’s culture that has had positive global impact. Thank you, UNESCO, for verifying what many of us already knew. You can learn more about this here.

The United Nations hosted a conversation about “Yoga for the Achievement of the Sustainable Development Goals.” The conversation highlighted the positive role of healthy living in achieving global goals. Basically, our main take-away from this is: do more yoga and spread more peace.

Last year, the UN named June 21st as the International Day of Yoga. This year, an even bigger celebration happened in New York, including music, mystics, and meals. If only this was every day.

Attempting to spread natural health awareness, the Indian government celebrated Ayurveda on October 28th with a focus on the prevention and control of diabetes. If you’re rusty on your Ayurveda knowledge, read up here.

The trend of themed yoga classes keeps growing. Yoga with goats in Oregon, Harry Potter Yoga in a brewery in Texas, Meowga yoga with cats, Sound-Off yoga with personalized headphones, Namasdrake and hip-hop yoga classes in both New York and LA – the list goes on. Choose carefully.

Meditation is becoming more available and accessible as a growing number of teachers are eager to address deeper levels of the practice. If you don’t have a drop-in studio near you, you can always try it at home! Get help starting a meditation practice here.

Yoga to live music has been around for a while, but now we have yoga DJ’s who are syncing beats to the asana for an all-immersive flow. Keep it going, guys. We sure will.

Earlier this year, JetBlue hosted free yoga classes in Terminal 5 at JFK airport. Last year, select airports implemented quiet yoga rooms and even a few yoga studios. But now we can do yoga in the middle of the airport next to our luggage.

This is only a rough estimate, according to Yoga Alliance, but studios everywhere are reporting increasing numbers of new members, including more men and children. Welcome, one and all!

Lole White Tour On the Road

The Lole White Tour has been planning mega-yoga events since 2012, wearing all-white clothes to pose for peace, but now they have something new. Now they have a series of community-powered local sessions. Buy those white outfits now!

To celebrate, Lil Hansen of Ludington, Michigan taught one of her regular yoga classes to her students in a senior home, then blew out the candles on her birthday cake. Happy Birthday, Lil!

Okay, this is not so much an event, but it’s an important lifestyle trend. Post-election anxiety increased the use of this hashtag on social media, and it includes everything from desserts to Netflix to – yes, you guessed it – yoga.

We are now coming to the end of 2016, and what a year it has been. Now more than ever, strangers and friends are asking me how to get into yoga, and I’m happy to report that it’s only getting easier to find a class, free or online.

Congratulations, yogis—we made it through!