Bleat in, Bleat out: Goat Yoga is Real and It’s Awesome 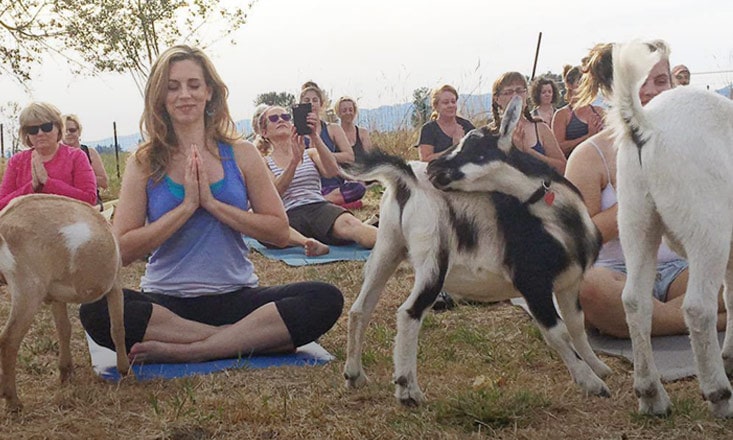 Yogis are, in general, an adventurous lot. Yoga in blistering heat? We're down for it. Holding challenging poses in exotic locales? Sign us up! So it's not surprising that some yogis find even more unique ways to grow and diversify their practice.

A farmer and a yogi found that adding goats (yes, actual goats) to a yoga class actually helped make it more fun and relaxing for everyone involved (including the goats).

Getting in Touch with Your Inner Kid

Lainey Morse is the owner of No Regrets Farm in Albany, Oregon. Originally from Michigan, Morse has lived in Oregon for a decade and occasionally hosts parties and events on her farm.

The idea for Goat Yoga was born when Heather Ballenger Davis, a yoga instructor, held her child's birthday party on Morse's farm. Davis mentioned how the farm, with its beautiful view of the Oregon Coast mountains, would be the perfect setting for a yoga class.

The first ever Goat Yoga class, held in the back field of No Regrets Farm and presided over by Davis, was a huge hit. Since then, Morse has scheduled several more classes.

So What Exactly IS Goat Yoga?

Goats, in general, aren't exactly built for yoga, so you won't see any of them doing the downward-facing dog. The yoga part of Goat Yoga is strictly for humans only. However, some of the furry cuties do tend to enjoy taking naps on the mat, regardless of whether a person is already on it.

At a typical Goat Yoga Class, students practice while soaking in the beautiful views and getting affectionate nuzzles from passing goats, as well as from the chickens and the farm's resident barn cat. Sure, there's the occasional inconvenience (key word: pellets) but Goat Yoga students take it all in stride. After all, it's all part of the experience.

Despite the funny images that the words “Goat Yoga” bring to mind, the classes actually look pretty fun and relaxing. ““My goats are just very peaceful animals and everyone that comes over leaves stress free and happy,” Morse told Modern Farmer. “When they chew their cud it’s almost like they go into a meditative state and it’s very soothing to watch and it’s perfect to combine with Yoga.”

Cuddly farm animals, an idyllic farm, and yoga: what's not to like? Does Goat Yoga seem like your cup of tea, or do you think that the whole yoga-with-animals trend has goat-en way out of hand? Sound off in the comments!