The 26 Poses of Bikram Yoga

Bikram yoga is one of the most popular styles of yoga in the world. Founded by Bikram Choudhury in the 1970s, Bikram yoga consists of 26 yoga asanas and two pranayama exercises that never change. The class is done in a “hot room” which is heated to 105°F (40°C), in order to replicate the temperatures in India.

People who practice Bikram yoga practice these postures and pranayamas in order to stretch and strengthen their bodies, and the heated room helps to go deeper into the posture and sweat out toxins. Specifically, Bikram Yoga is often referred to as the 26+2 which makes up the 26 same poses and 2 breathing exercises. Most poses are performed twice and they’re typically held between 6-60 seconds depending on the pose.

Below, you’ll find the 26 poses of Bikram yoga, so you can try it out for yourself at home! 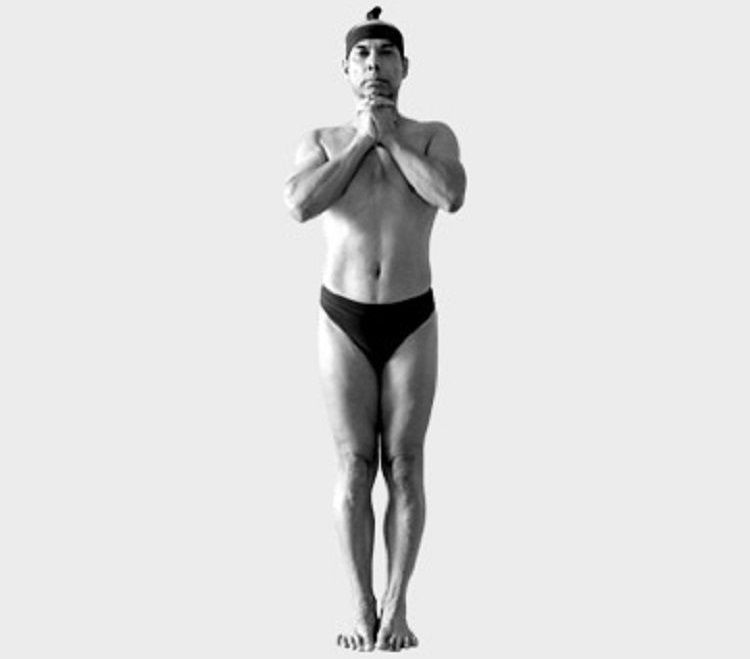 A Bikram yoga sequence starts out in a standing position, with a pranayama breathing exercise. Utilizing optimal lung capacity, a deep inhale and a deep exhale is practiced to provide the body with oxygen, increase circulation, and improve focus. 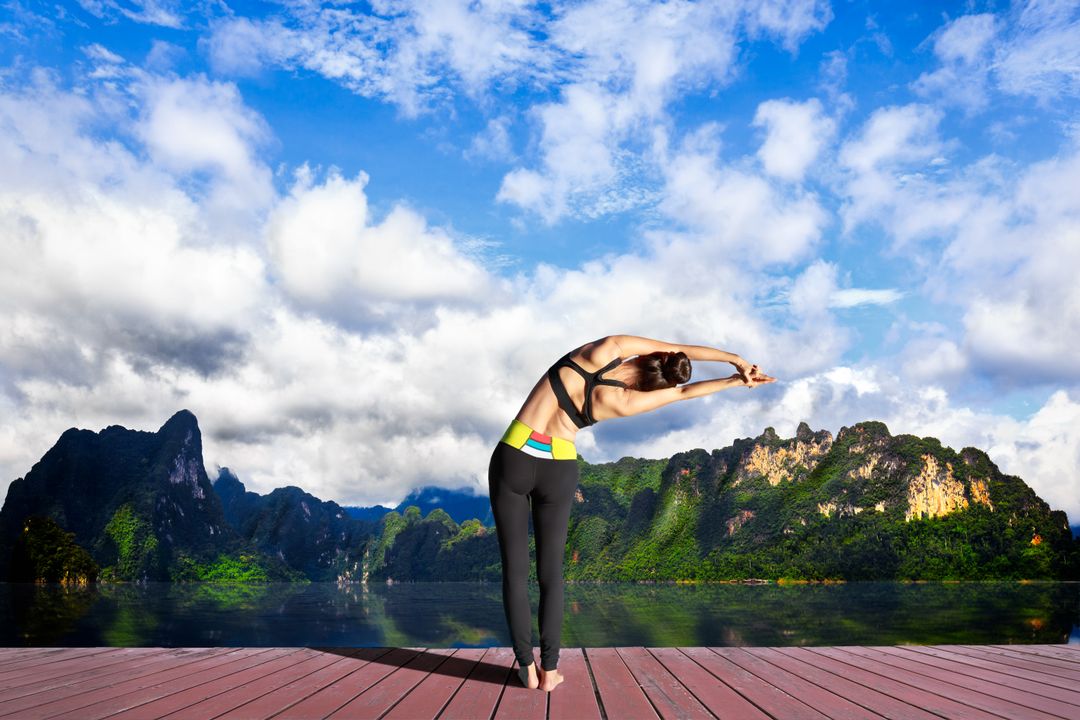 The next posture is Ardha Chandrasana, or Half Moon Pose. The name is different in Bikram yoga than in other yoga styles, where this pose is called Standing Side Stretch.

This pose strengthens the abdominal muscles and the spine, and stimulates organs necessary for digestion. 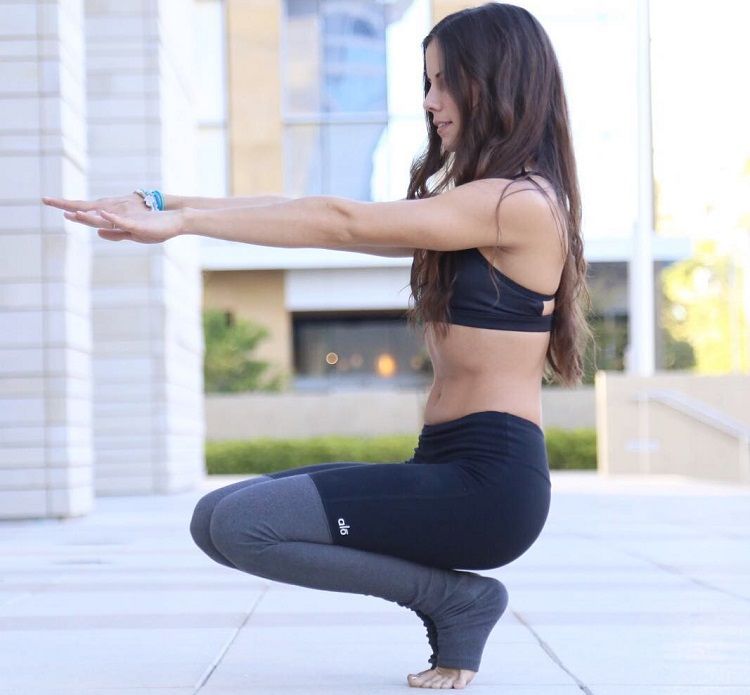 Next up is Utkatasana, or Awkaward Pose. Often referred to as Chair Pose in other lineages of yoga, this pose strengthens the lower body while increasing blood circulation.

Learn how to properly practice Awkward Pose (along with a few other benefits) here. 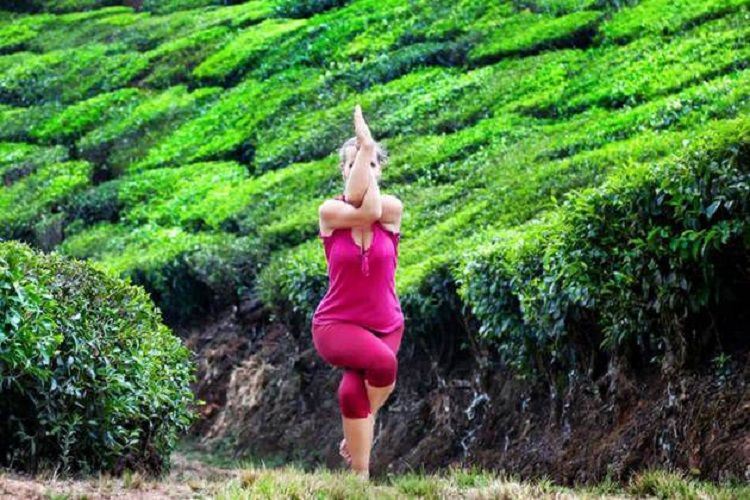 Challenge your balance with Garudasana, or Eagle Pose. This is the only posture that taps into all major joints of the body by strengthen, stretching, and providing greater mobility. Learn more about it here. 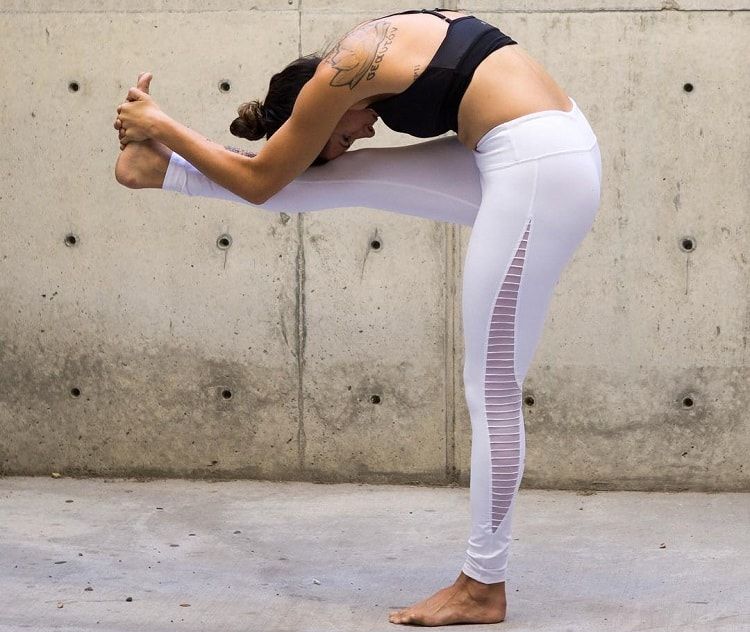 This posture, Dandayamana Janusirsana, or Standing Head-to-Knee Pose, is a highly challenging balance posture that engages the entire body. Specifically, this posture strengthens and stretches the legs, core, and arms while boosting concentration.

Just make sure to work into the pose slowly. It’s not a race, and the last thing you want is an injury. 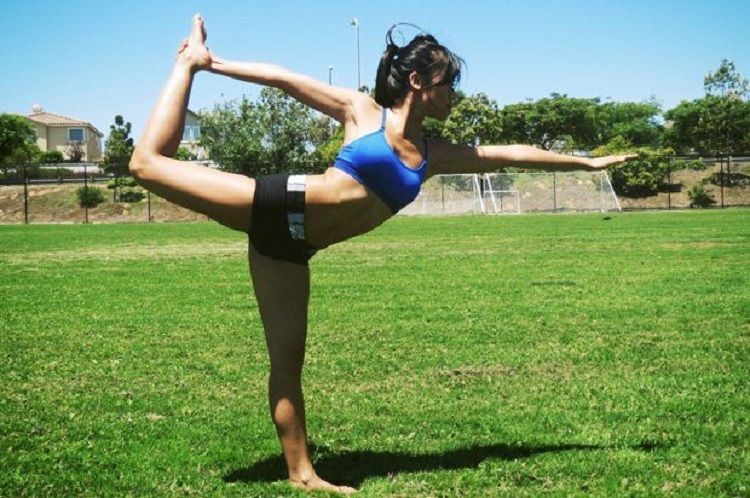 Continuing with balancing, the next transition is into Dandayamana-Dhanurasana, or Standing Bow-Pulling Pose. This pose improves strength and flexibility throughout the body and increases attention and patience. In addition, the Bikram style touts this pose as being the only posture that has a circulation effect of flowing blood from one side of the body to to the other, equalizing circulation.

A very similar posture called Dancer’s Pose is taught and practiced in other forms of yoga. Here are some great instructions on how to do it. 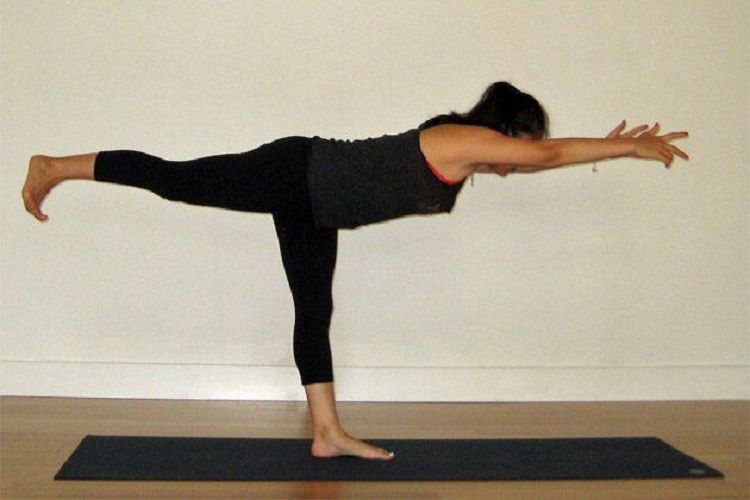 The next pose in the Bikram sequence is Tuladandasana, or Balancing Stick Pose. Once again requiring balance, determination, and core strength, this pose also increases circulation (especially to the heart and brain).

This pose is commonly practiced in other styles of yoga by the name of Warrior 3. Here’s how to do it. 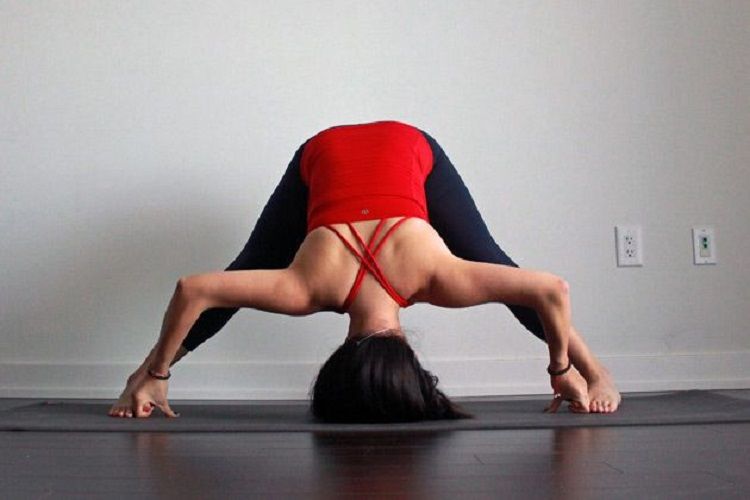 Take a break from balancing with Dandayamana-Bibhaktapada-Paschimotthanasana (what a mouthful!), also called standing Separate Leg Stretching Pose. This pose stretches the legs, spinal muscles, and specifically the sciatic nerve. It’s believed to improve the functioning of the abdominal organs and their associated functions.

You may have heard of this pose in other yoga classes as Wide-Legged Standing Forward Fold. Find out how to do it here. Trikonasana, or Triangle Pose, is practiced next in Bikram series to revitalize, strengthen, and stretch the body and mind. Of focus in this pose would be the hips, legs, and core.

This version of Triangle pose practiced in Bikram yoga is very different from the norm in other styles. Specifically, this pose would be called Extended Side Angle in other various yoga classes- it’s a great stretch for your side body, and you can find out more about it here. 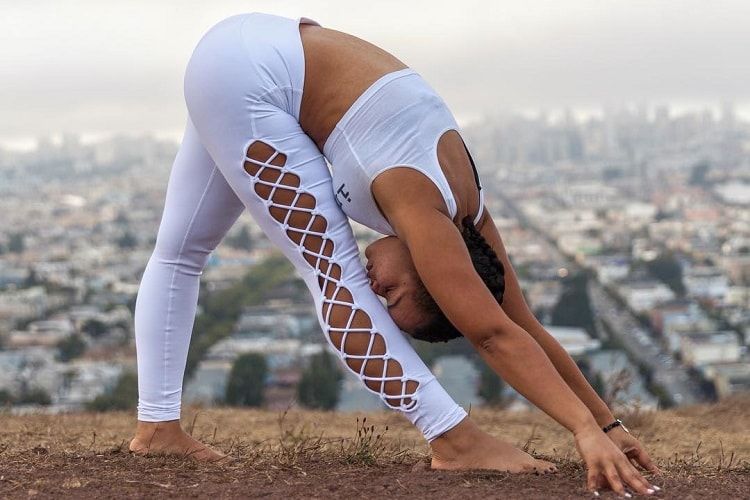 Translated from Sanskrit to Standing Separate Leg Head to Knee Pose, Dandayamana Bibhaktapada Janushirasana is an intense stretch in the legs and opens the shoulders. The posture is practiced for the benefits of massaging the internal organs and increasing metabolism.

If you aren’t a Bikram student, you may have practiced a similar version of this pose called Intense Side Stretch. Check it out here! 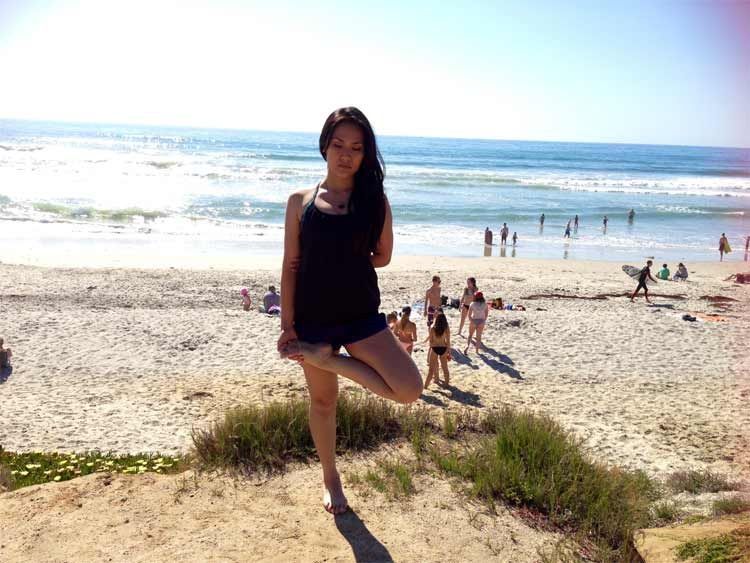 Tree Pose, or Tadasana in Bikram gets you back to balancing. This pose improves posture while strengthening the joints of the ankles, knees, and hips.

Here’s how to do the Bikram version of this asana. 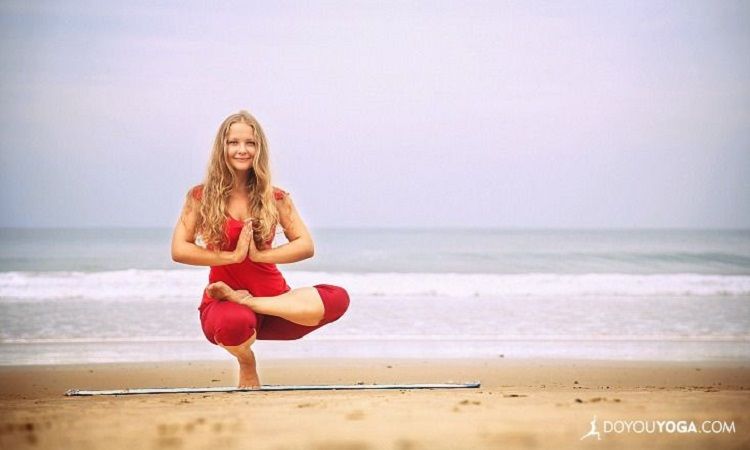 Finish off the standing series with Toe Stand, or Padangustasana. Important for strengthening feet, this pose expands range of motion in the ankles, knees, and hips. It also requires and builds mental stamina and focus.

Here are some tips on how to work into this advanced balance. 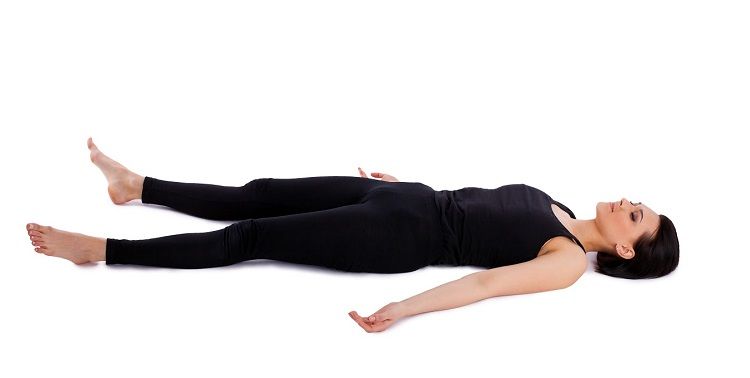 Beyond being highly relaxing and increasing mindfulness, here’s why you should always practice this pose for it’s awesome benefits. 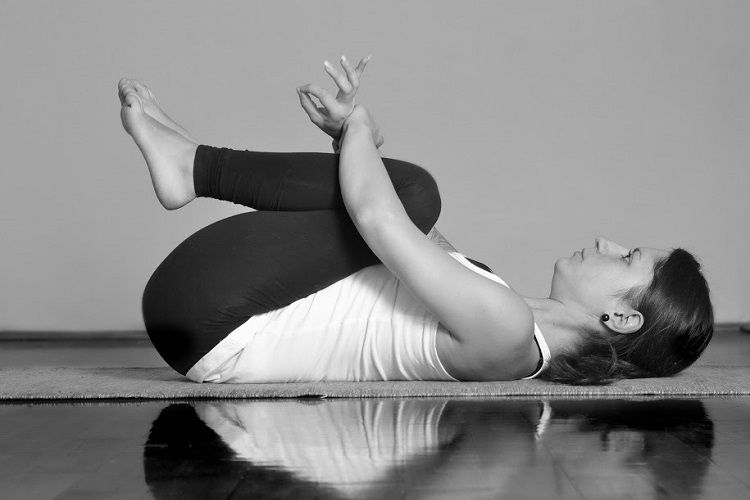 Before moving to the seated series, take a minute to open your hips with Wind Removing Pose (Pavanamuktasana). This pose is beneficial for relieving lower back pain by gently stretching. In addition, this posture engages the core and increases hip flexibility.

In other yoga styles, a variation of this pose called Knees-to-Chest is practiced. Here’s how. 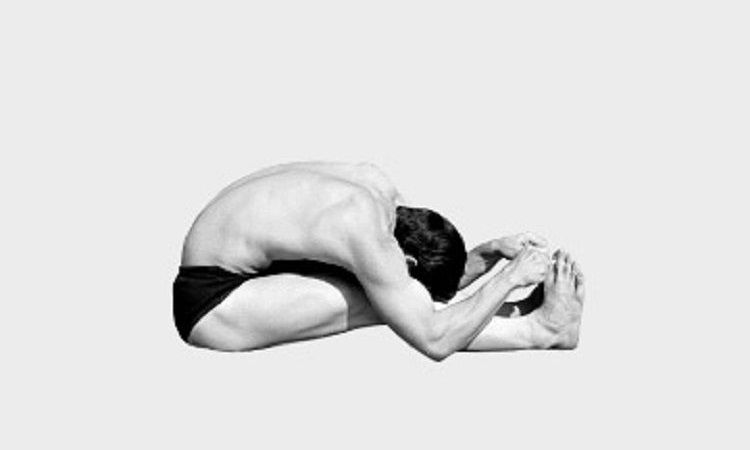 This pose, Sit Up ( Pada-Hasthasana) in Bikram yoga, is great for centering your mind, energizing the body, and stretching your legs.

Head-to-Knee Pose is a variation of this pose that often practiced in other styles of yoga. Here’s how to do it. 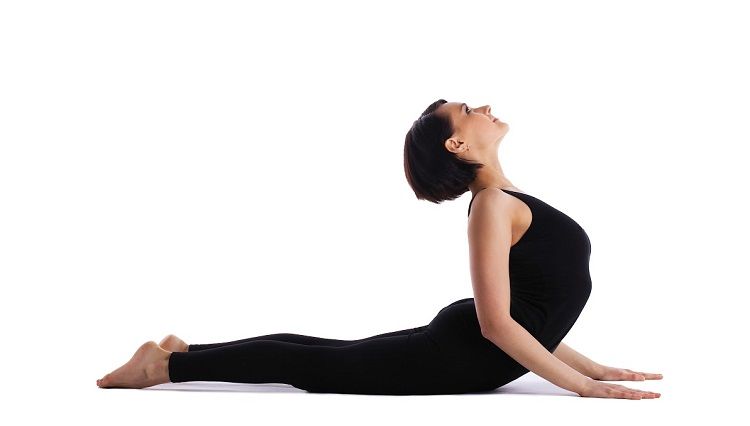 Everyone loves a good Cobra Pose, or Bhujangasana, and Bikram is no exception. Great for stretching and strengthening the core, this pose can prevent back pain.

Here’s how to do this simple backbend. 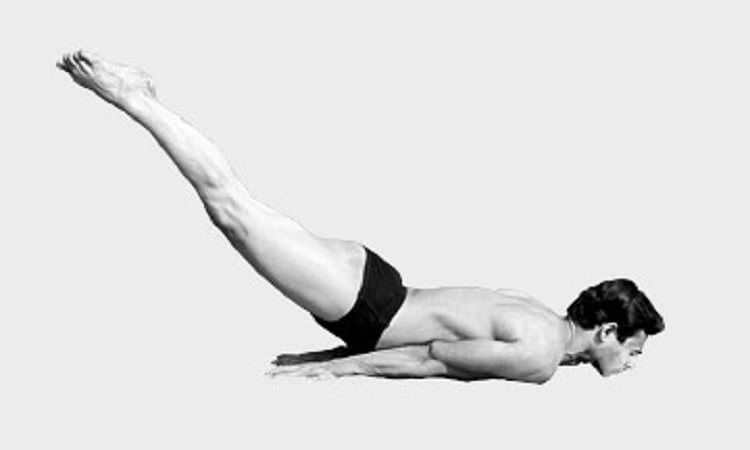 Locust Pose, or Salabhasana, is another great backbend that strengthens while stretching. This pose actually engages the entire body and tones the buttocks, hips, and legs. 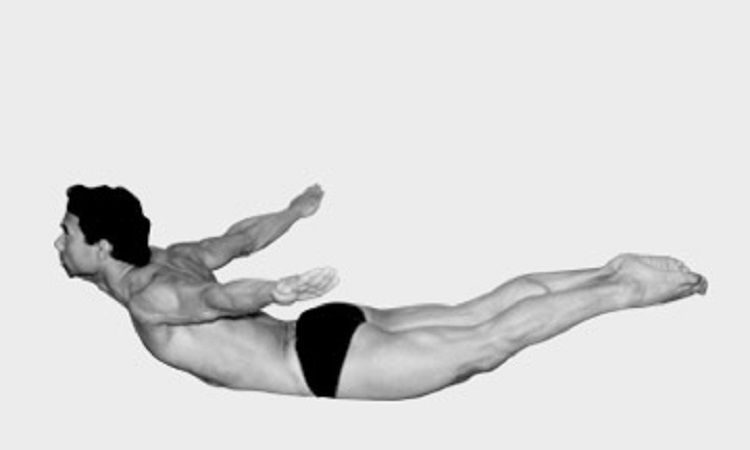 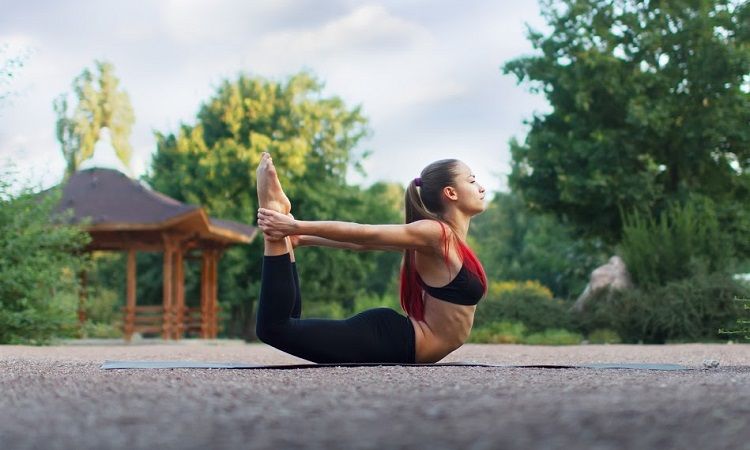 Bow Pose, or Dhanurasana, continues on with backbends, and is a great pose to open through your chest and shoulders. Invigorating in nature, this posture increases mobility of the spine.

Here’s how to do it. 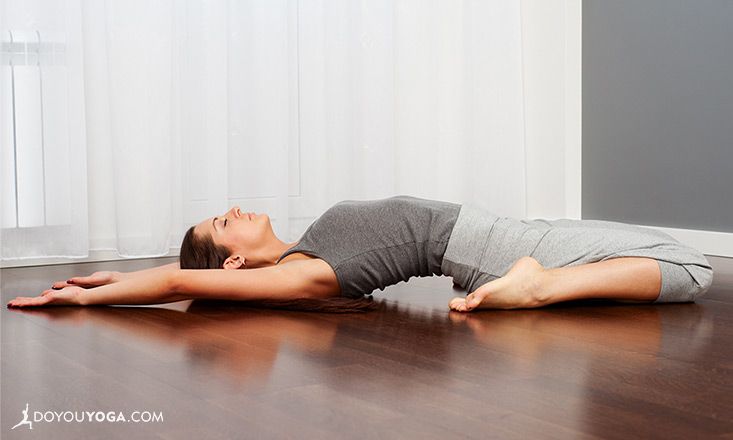 Giving yourself a little release from backbends, next up is Fixed Firm Pose (Supta Vajrasana). With this posture, you’ll stretch the leg muscles, knee joint, ankles, lower back, and hips.

Reclining Hero’s Pose is an alternate version of this pose that is practiced in other forms of yoga. Here’s a great how-to. 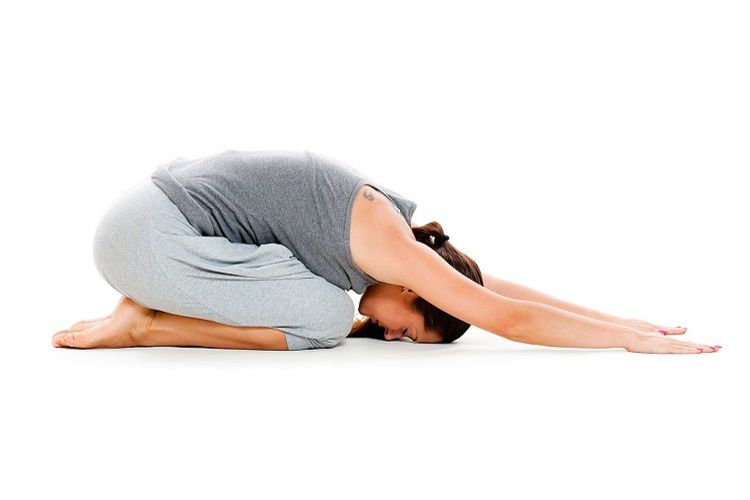 Half Tortoise (Ardha Kurmasana) in Bikram yoga, is an awesome, relaxing asana. Find release in the neck and shoulders while gentle stretching the hips in this posture.

Often called Child’s Pose in other forms of yoga, here’s how to do it, along with some of the benefits. 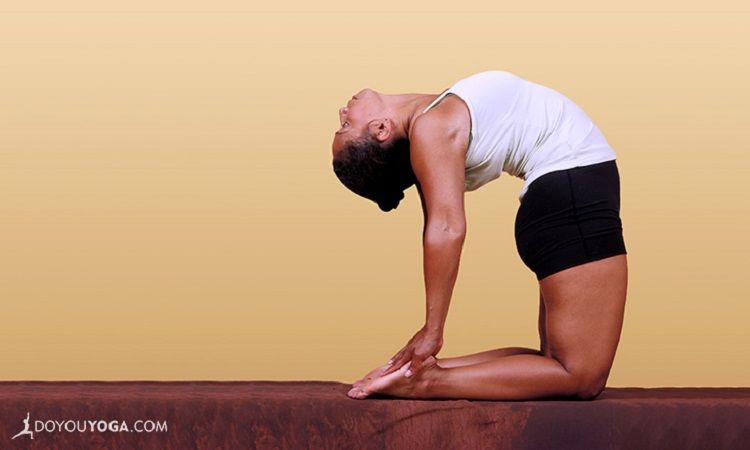 Only one more backbend to go with Camel Pose, or Ustrasana. Here’s how to do it! 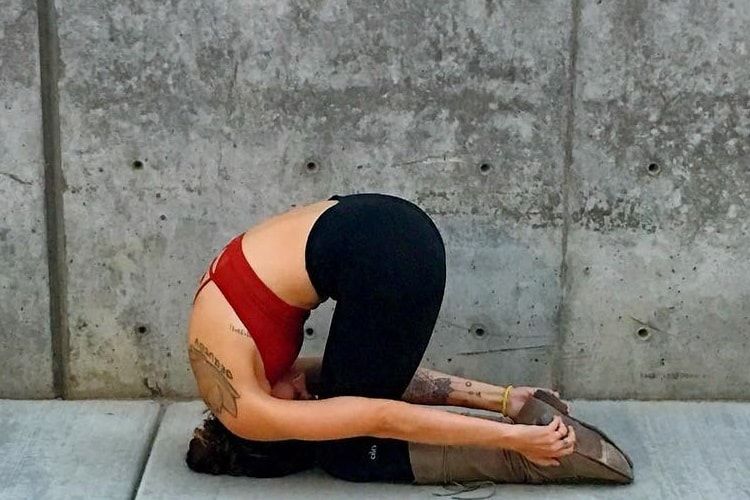 Rabbit Pose, or Sasangasana, is a great release from backbends. Here’s a how-to. 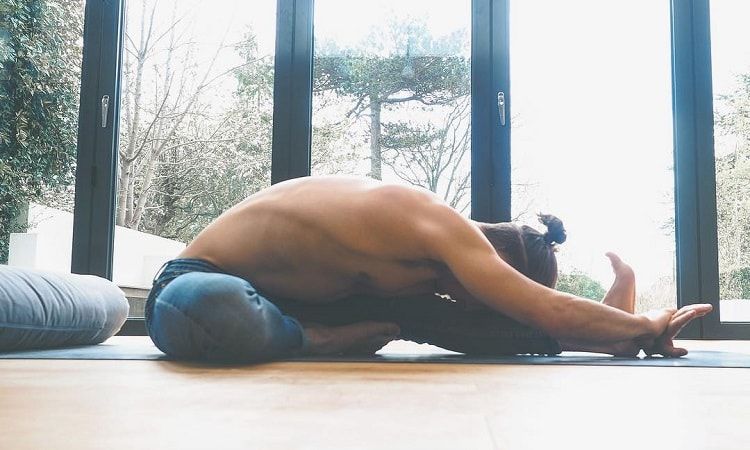 In other forms of yoga, this pose is called Seated Head-to-Knee Pose. Here’s how to do it. 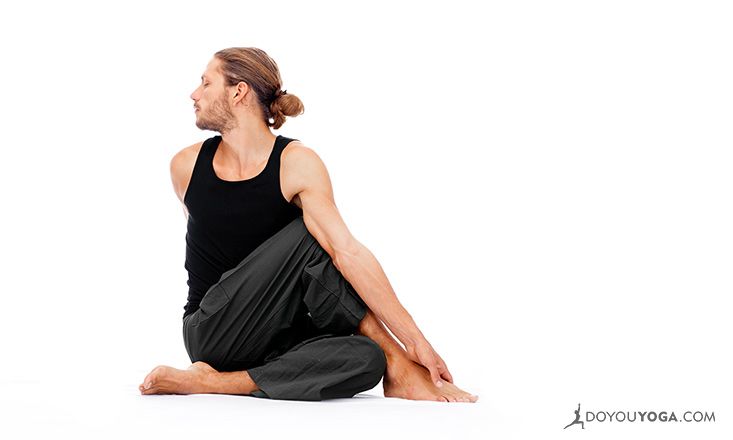 Spine Twisting Pose (Ardha Matsyendrasana), is performed on both sides to realign your spine.

Another name for this pose practiced in other styles of yoga is Half Lord of the Fishes Pose- here’s how to do this great twist. 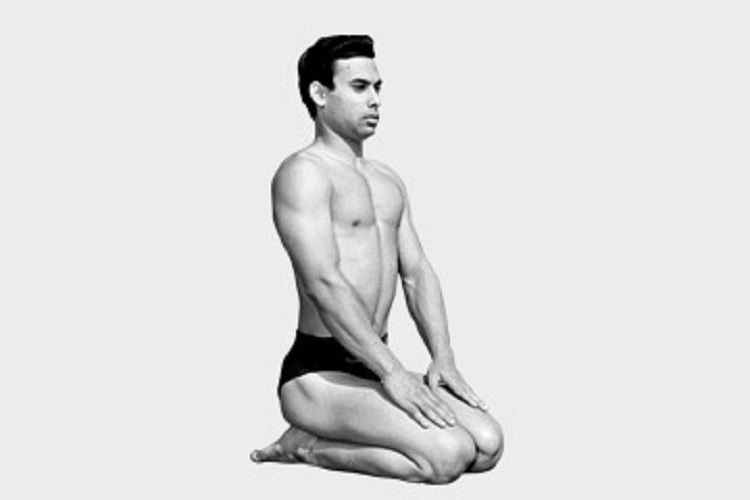 The Bikram sequence finishes in a kneeling posture and a pranayama exercise. Specifically it’s the use of Kapalbhati breathing while in Vajrasana.

Here’s how to practice it, along with it’s amazing benefits!

That’s it, yogis! Everything you need to know about the Bikram yoga sequence, and its postures. Have fun practicing!