The Top 10 Yoga-Loving States in the U.S. 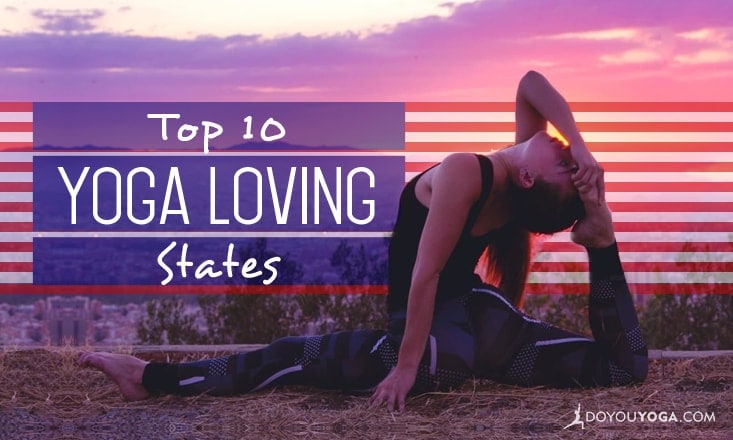 Yoga popularity in the United States has boomed in the past decade, with now over 21 million Americans having practiced yoga. With this surge in yogis and studios, there seems to be trends among individual states—with some states favoring the practice more than others.

Below, we’ve ranked the most yoga-loving states in descending order (from more to less). These results were compiled from the DOYOU survey, which assessed more than 10,000 people. Read on to see if your state made the list of top 10 yoga-loving states.

California may have had a jump-start on practicing yoga when the free-minded culture of the 1960’s pervaded the state. In fact, many credit the Beatles with passively influencing the western world to try yoga after the group came back from ashrams.

California always seems to be at the forefront of health and wellness trends, and yoga is definitely one "trend" that has stuck around.

Yoga in New York is almost as diverse as the state itself, with choices ranging from traditional yoga to dancing yoga to rooftop yoga. With something to appeal to everyone, it’s easy to see how New York ranks highly. The state of New York is also a breeding ground for yoga’s most popular and successful teachers.

The third most populous state also happens to be the third most yoga-loving state in the U.S. With tourism leading Florida’s economical sector, yoga tourism (retreats and workshops) has become incredibly popular in the sunshine state. Who doesn’t love beach yoga?

Texas is the home of all things big: big state, big trucks, big boots, and apparently, big yoga scene. In dense cities like Austin, Houston, and Dallas, the yoga movement is quickly taking over. Move over BBQ, there’s a new staple in town.

Interestingly, Illinois gained an early foothold in the U.S. yoga industry. In the late 1800’s, Swami Vivekananda brought the system of yoga from India to Chicago. Yoga in the west humbly began and slowly over the next century turned into its present multi-billion dollar industry.

Comprising half of this list, there are 5 contiguous yoga-loving states. Pennsylvania marks the middle of this yogi haven in the northeastern region of the U.S.

Ohio is not just a political bellwether (trendsetter), but the state also sets the bar for other interests like yoga. In this case the “purple state” doesn’t indicate a divide between parties, but rather an aligned crown chakra.

Not only residents of Massachusetts love yoga, but yogis from around the world flock to the state for a visit to Kripalu Center in Stockbridge. The renowned facility is a yoga and health educational center with a mighty lineup of the top wellness instructors.

Colorado consistently ranks among the top healthiest and happiest states. Overall well-being is clearly an important factor to the people of Colorado, so it’s no surprise to see that the state loves yoga (which is positively correlated with boosting well-being!).

While the U.S. as a whole loves yoga, some states show preference more than others. Were you surprised by the list of most yoga-loving states? We’d love to hear what you think— let us know in the comments below!