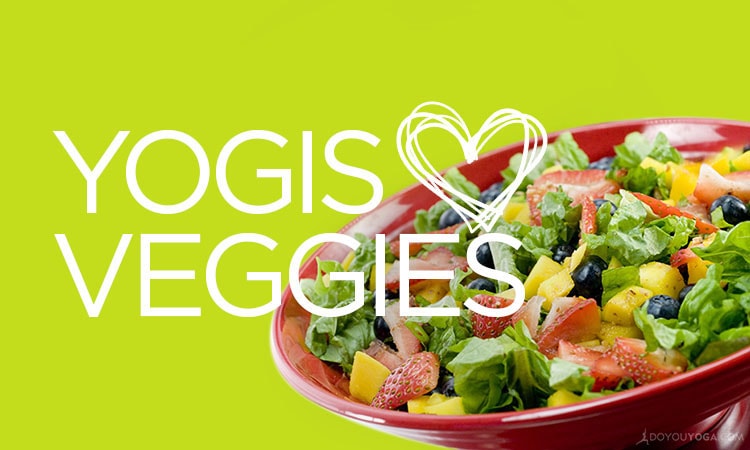 Have you ever listened to a group of people talking at a yoga studio when the conversation turns to food? For an outsider, it may seem a little odd. The food choices that excite a lot of yogis tend to be a little different than what revs up the normal foodie crowd.

Instead of comparing notes on a great new steak restaurant, you’re much more likely to catch them getting animated about tofu, tempeh, smoothies, juices, or some other dish where a veggie is the star of the show. Yogis love their vegetarian diets—and there are many reasons for it.

1. Veggie Diet Is Good For The Body

One of the many reasons people practice yoga is for what it does on a physical level. Beyond toning the arms and tightening the butt, yoga cleanses the internal organs, keeps the digestive system moving, improves blood flow, strengthens the immune system, and the list goes on. Having a vegetarian diet can add to the many health benefits of a yoga practice.

A vegetarian diet has been found to reduce the risk of heart disease, diabetes, cancer, hypertension, obesity, and more. Plant-based foods are generally easier to digest, higher in fiber, vitamins and antioxidants, and lower in sugar and calories. Vegetarian foods are also more likely to improve your energy level.

On the flip side, eating animal products can counteract the improvements to your well-being. Food that comes from animals, on the other hand, can create a sluggish immune system, drain your energy, and weigh you down overall.

Yogis want to feel good. They know yoga is one way to do that—and a healthy, vegetarian diet is the other side of the equation.

2. Veggie Diet Is Good For The Mind

We do yoga to calm the mind. The food you consume has the potential to either help in this process or it can have an opposite effect and increase the waves of negative thoughts in your head.

According to tradition, the best diet to help calm the mind is called a Sattvic diet, and perhaps not surprisingly, it’s vegetarian. The term Sattvic diet comes from the Sanskrit term Sattva, meaning clarity and lightness. A Sattvic diet, therefore, is comprised of foods that help you live a calm life with a quiet mind. It includes primarily fruits, vegetables, grains, legumes, and nuts, and, the more naturally these foods can be received the more Sattvic they are considered.

According to Ayurveda, the best foods are those that are grown in harmony with nature. Therefore, fresh milk from a cow treated with love and care, and fruits that have fallen off a tree themselves are the most Sattvic because they were given willingly. Other foods believed to add to clarity of mind include nuts and seeds that have not been overly roasted or salted, grains that have been lightly roasted, and herbs including ashwagandha, gingko, saffron and tulsi.

On the opposite end of the spectrum are foods known as Tamasic and Rajasic that dull the mind and lead to hyperactivity. These include foods from animals, processed foods, caffeine, and salt. The power of eating light, healthy foods is beautifully described in the Bhagavad Gita:

When light which is wisdom streams forth from all the doors of the body, then it may be understood that the pure-clear modality (satva) is predominant. – Bhagavad Gita (14:11)

3. Veggie Diet Is a Non-Violent Way To Be

Yoga classes often open and close with the chanting of Aum—the universal vibration that connects us all. According to the teachings of yoga, all living creatures come from the same divine spark—humans and animals alike.

Yoga philosophy also teaches the concept of ahimsa, or non-violence. For many yogis, this, too, extends to animals. This practice of living a life focused on non-violence can be a common catalyst for following a vegetarian diet. It’s not uncommon for vegetarians to take their beliefs about both practicing non-violence and the connection between all living things to a degree in which they consume foods in their most natural state through a raw vegan diet.

Many yogis believe you are what you eat. If you eat natural plant-based foods that are high in nutritional value and easily used by the body, the delicate internal balance can remain in check. It’s a balance that extends to the mind. If the body is out of whack, the mind will struggle to remain calm and emotions can become easily unsettled.

Bottomline: If the body is happy, the mind will be light and peaceful — a state that we can safely say is something that we – yogi or non-yogi – all strive for.