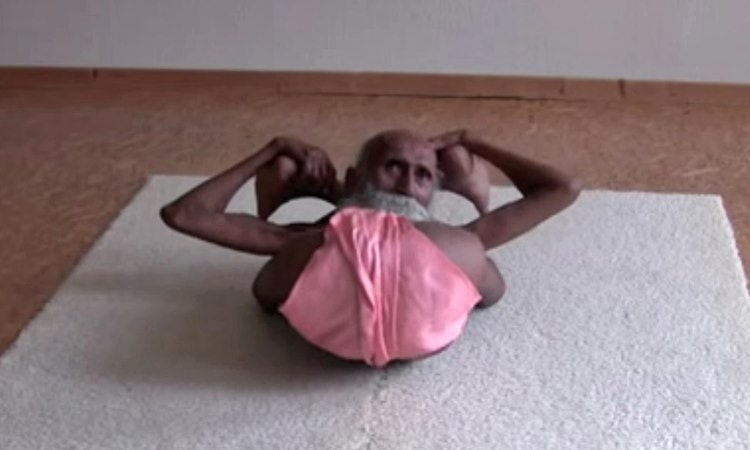 Even though his age alone is astounding, Swami Yogananda Maharaj Ji isn’t your average 105-year-old. Born in Madhya Pradesh, a central region of India, on September 14, 1908, the centenarian is one of the most honored yoga teachers in India, and quite possibly one of the most flexible human beings ever.

The Himalayan Yoga Academy, where the swami is a guest teacher and honored member, claims that he has practiced Sukshma vyayama yoga for the last 84 years.

Sukshma vyayama is a “Himalayan yoga system that helps [!in!] developing stamina, health, and longevity.” According to the academy, it is the yoga of micromovements, and is also known as yogic joint gymnastics. It features gentle, small joint and muscle movements that increase flexibility and are especially good for older yogis.

Swami Yogananda Maharaj Ji, sometimes called Swamiji, still gives daily classes—sometimes up to four a day. He is touted as a shining example of health, and purportedly still has all his teeth, good eyesight, hearing, and memory, not to mention “extraordinary” flexibility; his excellent health is attributed to his unusual diet.

He eats only raw food, except for the occasional drink of cow’s milk, and the Om Shanti Om Yoga Center claims that he eats only once a day, with each three days of eating followed by up to a week of fasting. He is said to have never taken medication in his whole life.

Swamiji’s resume is just as impressive as his eating habits. Although he lives in Rishikesh, India, he travels around the world during the spring and summer, presenting seminars and yoga workshops, and receives a special pension from the government of India “in recognition of his merits as a Freedom Fighter.”

According to the Om Shanti Om Yoga Teacher Training School, the 105-year-old yogi uses his yogic system to help urban students heal themselves from the stress of city life.

Maybe we all could live this long too, if we had moves like these!

Update: Swami Yogananda Maharaj Ji passed away in January 2015 in Rishikesh at the age of 106. Rest in peace, guruji.