Prenatal Yoga – How To Calm The Chaos Of Pregnancy 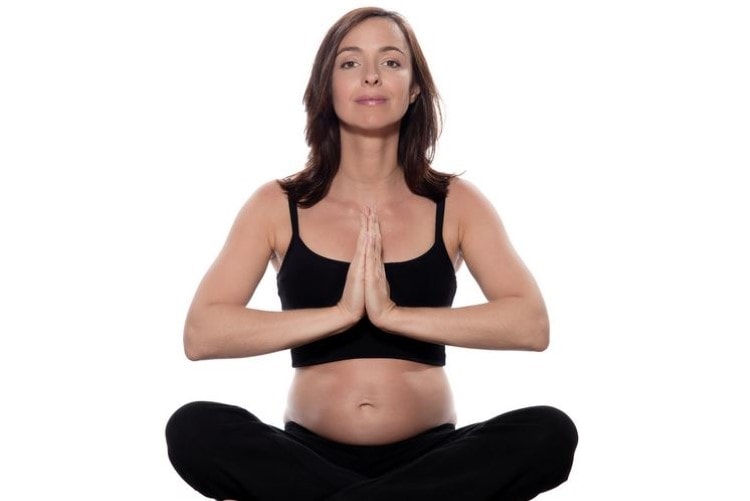 The iconic image of a pregnant woman is one where she is tenderly touching her belly and looking down with a serene expression of bliss. I think every expecting mother has at least one picture like that – as a Gaia mother-goddess with gogi berry eyes and eternal effervescence. We all want to capture a peaceful depiction of our pregnancies to remember the beauty of the moment, and have a new profile pic. The irony of course is this: as much as I wanted to document the gestation of my baby as this tranquil period of existence, that was probably how I felt only 1% of the time. The other 99% I was full of fear and anticipation. I had no idea what to expect, what birth would be like, and if I was going to know what to do once my baby was born. But through all the anxiety and physical irritations that were a part of my pregnancy, it was my yoga practice that was my strongest ally.

Pregnancy is Harder Than You Think

Pregnancy, although beautiful and sublime, also means that your body has essentially been taken over by a parasite – feeding off you and growing at an exponential rate. There are all sorts of physical ailments that are caused by your innocent little baby floating around in your tummy. It can be the size of a sea monkey and still knock you off your feet. I know I personally had really intense morning sickness, except it was all day sickness. It felt like I had the worst hangover of my life, but for 9 weeks.

As my baby grew and I headed into my third trimester I felt less like barfing in my hands, but there was a whole new host of discomforts that infiltrated my being. For a while my baby would push its head/elbow/knee up against my bladder, so not only did I feel constant pressure, I also had to pee 98 times an hour. Sometimes when I was walking, my vagina would feel so heavy and sore it was as if it had been lifting weights at the gym. My lungs were squished up against my other organs, so breathing was not only taxing, but also something I had to remind myself to do.

And then there was the mental aspect of pregnancy that was also quite difficult. My hormones were on an emotional hayride taken over by Seabiscuit on speed. I was often exhausted and wanted to sleep twelve hours a day. And as much as I hoped to feel this instant connection to my baby as if we were communicating through our third eyes, I still had no idea who the hell was inside of me, and why they moved around so much in the middle of the night. It was at this deeply introspective stage when I felt as if I was lost between two worlds – the self I had always been, and the mother I was soon to become.

Yoga Will Help Calm The Chaos

When I was on my mat, it was this sacred time that I spent, totally focused on my body, mind, spirit and baby. As yogis we are used to looking inward during our practice, and being in that space took me away from the angst and back into myself. Rather than thinking of the baby as sucking my vitality through the umbilical cord as I often felt, I would imagine an energetic exchange between us. I would feel stronger because my baby was sharing its life force with me.

If I were tired in a warrior-two pose I would think of my child supporting me, and that we were doing this pose together. I amazed myself by how strong I could be, which contradicted the cliché of seeing pregnant women as frail delicate creatures who need to stay off their feet. Of course pregnant women need to be conscientious and reasonable with how far we push our bodies, but we are still very capable. In truth a pregnant woman is a warrior who is preparing her body for the most challenging physical exertion humans endure. My baby and I were training for the biggest event in both our lives. It was then I understood that as a pregnant woman I was never alone, but my baby and I were a team.

During my daily mediations I would allow myself to release all the tensions and focus primarily on the moment. I would think about my baby, and then think about how I was meditating and wasn’t supposed to be the thinking. Then I would think about what I was going to eat for second breakfast, which comes about one hour before first lunch. After all those thoughts circled through my mind a few hundred times, I would finally settle. There would be these moments where I would just be present – existing and acknowledging the fact that what was going on inside my body was nothing short of a miracle.

Even throughout the chaos of pregnancy, I highly recommend devoting time and energy to your yoga practice. Some of my favorite memories of my pregnancy were while I was on the mat. I still remember the feeling of going into shoulder stand and watching my baby reposition in my belly to adapt to the change in perspective. Or the sensation of her doing summersaults while I was trying to be Zen in shavasana. There are the obvious benefits for maintaining your practice – like the fact that staying in shape will help build endurance for your birth, as will the breathing exercises and mental determination. But I felt the spiritual elements were by far the most meaningful. After the baby is out of your belly, life will never be the same again, and your yoga will help you honor this transition in a lastingly profound way.