How To Build Core Power and Find True Strength 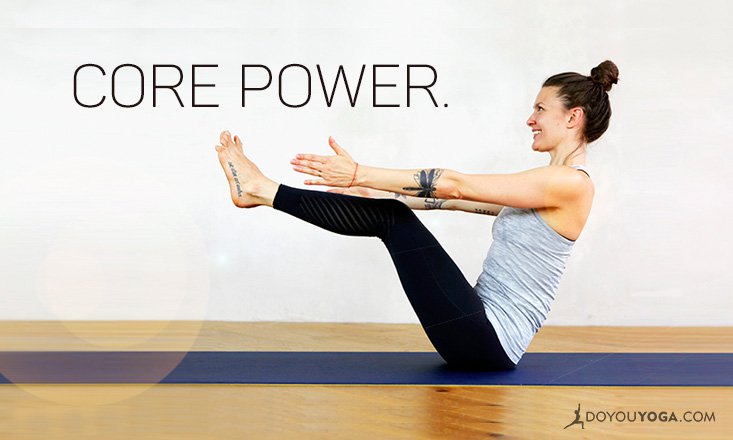 You’ve certainly been asked in many a yoga class to “activate your core.” But where exactly is the core? And how is it activated?

A vague notion of core might lead us to think that it’s somewhere around the navel, and that a strong core is associated with a rippling six-pack. While the upper abdominals are elements of a strong core, they are certainly not the root.

What do we mean when we talk about core?

Like the core of an apple, we could say the core of the body extends over a vertical line up towards the sternum. But the seed of our core strength really sits at the base of the pelvis, and it is from that point that we find our true energetic power.

So true core strength really lies much lower and deeper inside the body than those dreamy washboard abs.

What are the important core muscles?

The two muscles groups that mainly account for core strength are the pelvic floor and the abdominals. These muscle groups are responsible for shaping and supporting the spine as well as creating the lightness we need to float through a strong yoga practice.

The pelvic floor consists of three layers. The most internal layer of the pelvic floor is the most important to core integration. This layer can be engaged to help us gather strength inwards and upwards.

When moving into challenging arm balances, the pelvic floor is where we first start to find the lift. To feel engagement of the pelvic floor, draw the pubic bone and tailbone towards each other.

The abdominals themselves consist of four layers. The layer closest to the skin is the rectus abdominus—our beloved six-pack. Because this muscle lies close to the surface of the body, we don’t have much trouble figuring out how to engage it. We can feel it, and in some bodies we can see it, but the truth is that rectus abdominus is a pretty boring muscle, largely undeserving of its huge popularity.

This long muscle runs from the pubic bone to the sternum. Contraction of the rectus abdomis shortens the belly and rounds the back, bringing the spine into flexion. This muscle is really important in poses like Bakasana (Crane pose), where we’re working with flexion in the spine and overall core engagement.

However, when the body is overly conditioned for contraction of the rectus abdominus, we can create a hindrance to the freedom of movement we want in the yoga practice, specifically in backbends.

Moving inwards, the next two layers of the abdominals are the external and internal obliques. These muscles run diagonally from the sides of the torso towards the midline of the belly. When both the left and right sides of the obliques are simultaneously engaged, the spine rounds into flexion.

Contraction of one side moves the spine into a side bend and/or rotation. The obliques therefore are primarily important in side-bending and twisting poses, as well as in poses where the spine is rounded. They support the spine in a significantly greater variety of movement than the rectus abdominus.

A great deal of core power comes from stabilizing the relationship between the pelvis and the rib cage, and transvers abdominus is the most important direct link between these two stuctures.

The deepest, and most important layer of the abdominals is the transvers abdominus. Like a very wide belt, it runs from the lumbar spine around to the midline of the belly. The lower fibres of this muscle integrate with the deep layer of the pelvic floor, the upper fibres with the diaphragm.

A great deal of core power comes from stabilizing the relationship between the pelvis and the rib cage, and transvers abdominus is the most important direct link between these two stuctures.

Together with the pelvic floor, the transvers abdominus is what allows us to create axial extension—an overall lengthening of the spine. This lengthening extends the ribs away from the hips in standing and seated asanas. We use axial extension to move safely and efficiently into sidebends, twists, backbends and forward folds, so the transvers abdominus and pelvic floor are active in every range of motion.

In arm balances, the pelvic floor and transvers abdominus work together in creating the power to lift the hips away from the ribs.

How to REALLY Engage Your Core

As we move deeper into the core, we find muscles that support a wider variety of movements than those at the superficial layers. A focus on training a visible six-pack might make us look good in a bikini, but it won’t give you true strength or versatility in the yoga practice.

For this, we need to focus much more on the deep belly. We may discover at first that the challenge is not so much to strengthen the muscles, as simply to find them! We need to throw our ideas of flexing the abs out the window—this will not help us find core power in most ranges of motion.

Instead, think of subtly gathering energy inwards and upwards from the pelvic floor through the central column of the torso. Imagine you’re lying on the floor trying to wiggle your way into a too-tight pair of jeans (we’ve all been there). Can you translate that feeling into your yoga poses? That’s the engagement we’re looking for in a strong, healthy practice.