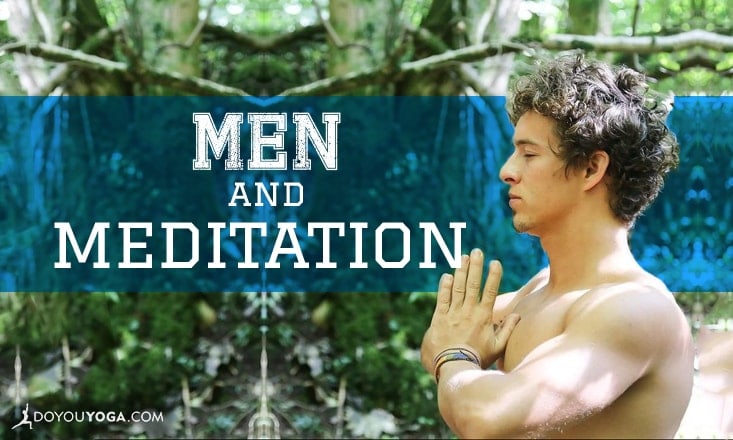 Based on historical depictions, it’s believed that yoga originated in India over 2000 years ago with male sages as the founding fathers. Passing down teachings to male students, male leaders continued to dominate and develop the world of yoga until the early 1900’s. More recently, the tides have shifted as yoga’s popularity in other cultures grew exponentially and morphed into a female-centric practice.

But it seems that males are slowly trickling back into the yoga scene—and after DOYOU conducted a global yoga survey with over ten thousand people this past year, we found a few surprising tidbits (see below) about the way males practice yoga.

Survey data showed that of those who practice meditation, twice as many males meditate daily versus females. With males being the minority in most yoga classes nowadays, it’s intriguing to see that the ghost of yoga’s past may be returning. But are males only showing up for meditation or are they showing up for an asana yoga practice as well?

There still seems to be a stigma attached to yoga—that it’s a female “workout” of mostly stretching— when in fact it was actually created by males and is way more than just stretches.

While yoginis currently outnumber yogis, meditation has taken off in the past decade and has become widely accepted. Even in the most closed and rigid of settings like the corporate workspace, meditation is penetrating barriers. Celebrities, business moguls, and professional athletes praise the practice for its stress reducing properties and even accredit their success to meditation.

These influencers help detach stigmas and promote the ancient and valuable practice of meditation. After all, if Phil Jackson (11 time NBA champion coach and proclaimed “Zen Master”) tells you to meditate, you ask how many minutes.

The well-known benefits of meditation draw many to the calming practice. But apparently, men (at least the ones we’ve surveyed) are more drawn to meditation and its beneficial effects compared to women.

Below, we’ve listed a few male-oriented meditation benefits that may help explain why this gender appears to desire mindfulness and meditation more and more.

Peer-reviewed studies have shown that a mindfulness meditation practice can improve focus, attention, energy levels, and decision making. Whether crunching numbers in a cubicle, studying for an exam, or pitching the last inning of a baseball game, everyone can benefit from a practice that prepares the mind/body for dealing with stressful situations and promotes productivity.

Studies have shown that meditators report a higher overall level of well-being. Not only do they have a higher quality of life, they also reap the mental and physical benefits of meditation.

Specifically, research has displayed how a meditation practice can decrease anxiety, stress, and depression. Physically, meditators have lower blood pressure, improved immune systems, and a lower risk of heart disease.

Numerous scientific studies have shed light on the mechanisms behind pain and how a meditation practice can be an effective treatment for pain. The brain activity of certain meditators shows that the mindful-awareness practice reduces chronic pain significantly. Basically, meditation doesn’t reduce pain input, but rather can help control the secondary feeling of pain.

Of note: Out of our sample, male yogis were older than females (60% of males were 35 and older). A higher maturity level could also factor into the analysis of why more males prefer meditation.