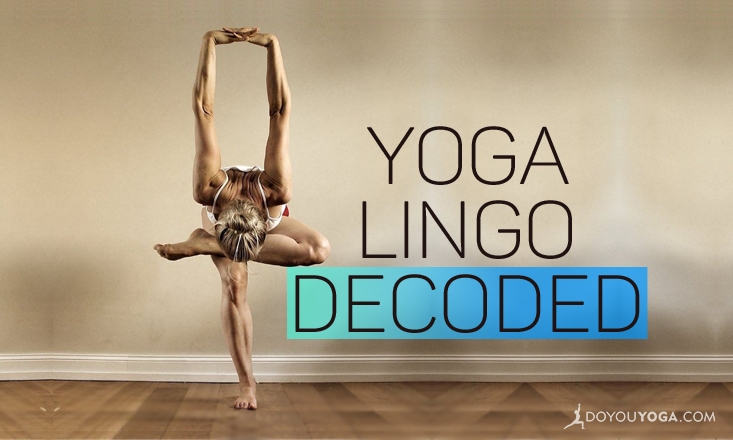 Yoga has a language of its own and it is not just Sanskrit. While considerable amounts of yoga jargon come from Sanskrit origins, cues and phrases like “stack your shoulders” are also common in yoga classes across the globe.

Basic knowledge of yoga words and phrases creates a solid foundation for practice and growth as a yogi, yogini, or yogin. To help establish a solid foundation, here is part one of Common Yoga Lingo Decoded and includes a list of 11 common words and 3 phrases.

Sanskrit term from 'a' (non-, without-) and 'himsa' (violence). The basic meaning of ahimsa is nonviolence, non-injury, compassion, and kindness. It is one of the yamas: moral principles, basic tenets, and foundations for living a conscious life.

Ahimsa includes physical, mental and emotional nonviolence towards all other life forms (including animals) and the self.

This one has multiple meanings in yoga. One general meaning for asana is the place in which the yogi(ni) sits and the postures in which they sit.

is known for describing the asanas as a seated position that is firm and relaxed. Another meaning for a yoga asana is the physical practice of yoga, the yoga poses and postures.

Internal body locks associated with specific areas of energy. Bandhas are engaged to help control and redirect the flow of prana by contracting organs and muscles within the body. The three bandhas often taught in hatha yoga are the Mula Bandha, Uddiyana Bandha, and Jalandhara Bandha.

Very simply means view or gaze. It is often a specific point or direction for the eyes to softly gaze during asana and meditation practice. In addition, a focused gaze can also be used to develop concentrated intention.

Sanskrit roots of 'man' (to think; mind) and 'tra' (instrument of thought). A mantra can be a sound, syllable, word, or phrase that is the focus or repeated often during meditation or asana practice. It is sacred in nature and is meant to inspire the practitioner. Om is the most commonly used mantra.

A symbolic and spiritual gesture, seal or closure that is usually created by the hands and fingers. Mudras are used in many Hindu and Buddhist ceremonies. Mudras partnered with specific pranayama practices affect the direction and flow of prana in the body. Common mudras practice in yoga are

Jnana/Gyan Mudra – tips of the thumb and index finger together and other three fingers together and light stretched,

Dhyana Mudra – palms facing up on the lap with the right palm on top and left palm under, tips of the thumbs touching, and

Anjali Mudra - pressing the palms together by the heart.

Sanskrit roots of namas (bowing) and te (to you) or nama (bow), as (I), and te (you). A traditional Namaskar, or greeting or gesture of respect, that involves bowing forward with the palms together in Anjali Mudra by the face or chest.

In yoga, namaste is a greeting of souls. It can be loosely translated to mean “I bow to you.” It can be expanded upon to mean many different things including soul meeting soul and recognizing the places where souls are one.

A sacred sound and vibrational energy that begins and ends in full silence. Most commonly written with the two letters O and M, the mantra consists of four sounds A-U-M and the silence afterwards. It encompasses all forms of time including the past, the present, and the future. It is the eternal syllable of all that exists.

Sanskrit for “life force” or “vital principle” from pra (constant) and an (movement). Prana is the cosmic energy that brings life and saturates the entire universe with energy. Additionally, it sustains life and creation. Prana is considered the original life force. It is a powerful and vital healing force in the body. Prana moves through the energy channels or nadis within the body.

From the Sanskrit word for “string, thread” and more commonly referenced as a genre of ancient Indian texts filled with aphorisms or concise statements of observation and general truth or rule.

Most famously in modern yoga,

Patanjali’s Yoga Sutras – these are 196 Indian sutras that were originally verbally passed down and assembled prior to 400 CE.

While all three terms have come to mean a practitioner of yoga, they can also be ascribed to Hindu, Buddhist or Jain ascetic practitioners and spiritual teachers, as well as individuals who have dedicated their lives to the pursuit of spiritual knowledge and enlightenment.

A genderless yogini is described in Vedic Hindu texts as transcended from the physical form and merged with the Hindu godhead to attain the highest state of human spiritual progress and sheds gender identity to become a genderless spirit or being.

Often phrased as “breathe into your shoulders and exhale release tension and stress” or “breathing into your heart to fill it with love and joy,” the sayings invite the action of breath to fill more than the lungs.

While basic anatomy highlights the fact that inhaled oxygen will NOT be directed away from the lungs and rerouted to the lower back just because we “breathe into the lower back,” the concept is to create space for focused attention and intention to a specific area within the body.

Next time you want to roll your eyes when you think of “breathing into your kneecaps,” work to alter the internal self-talk and positively affirm that maybe your kneecaps deserve a little love and attention.

Yogi pro tip: anytime you hear the phrase “avoid compressing/crunching” think about what can you lift and lengthen. The wrists often get compressed when weight is placed entirely on the wrist creases and not evenly distributed in palms.

This also happens when the arms are not lifting weight off the hands because the humerus (long bone in the upper arm) is not lifting back into the shoulder joint. Additionally, the lower back often is crunched in backbends when the sternum is not actively lifting to help lengthen the vertebra in the lower back.

“Stack your shoulders directly over your wrists” or “stack your heels directly under your knees” are common yoga phrases used to maintain anatomical safety and alignment. The concept is to have the bones align so the muscles can wrap around the supporting bones in anatomical fashion and maximize the bones and muscles supportive potential.

As your Drishti flows to the end of this article, focus on lifting from the crown of your head and grounding down through the soles of your feet to avoid compressing your lower back, and to stack each vertebra one on top of the other.

To intensify this practice, engage your bandhas, breathe with intention into your heart, and exhale-release all that does not serve you. Please feel free to comment with any additional yoga jargon you would like to see in Part 2 of Common Yoga Jargon Decoded as well as any of your favorite yoga jargon.