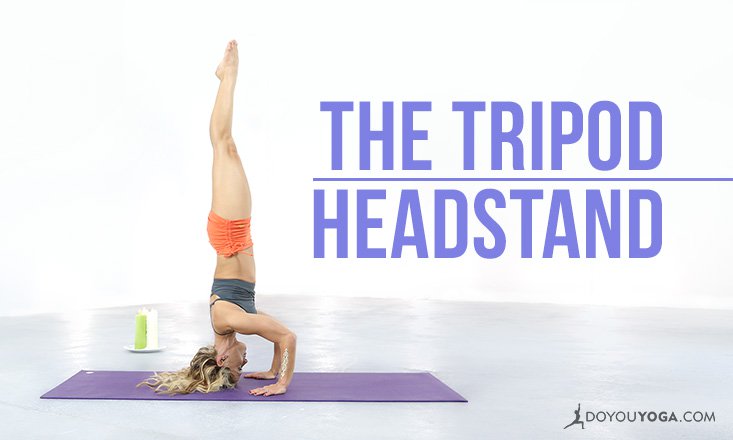 Tripod Headstand (Mukta Hasta Sirsasana A) is one of the unsupported headstands that conclude the Intermediate Series of Ashtanga yoga. Tripod Headstand is used repeatedly as a transition into and out of arm balances. Finding the strength and stability for this pose builds a calm and steady mind.

It is not recommended to hold Tripod Headstand for extended periods of time. 5 to 10 breaths is the maximum recommendation for holding it, and as such, it should not be used in place of the traditional Bound Hand Headstand (Baddha Hasta Sirasana A).

If you’re new to yoga and headstands in general, I suggest you try this free 30 Day Yoga Challenge. It will help you build strength and find confidence, so you can move up to more challenging postures. 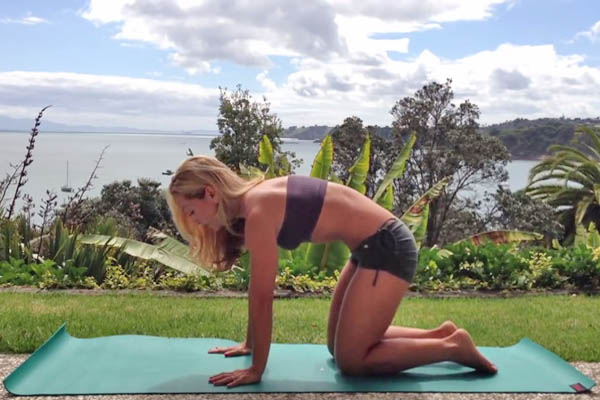 Starting off on the hands and knees, keep the hands shoulder width apart and the feet together. Stabilize the shoulder girdle and draw the elbows back to keep them in line with the wrist and the shoulders.

Avoid spreading the fingers too wide apart or to close together on the mat; keep them in a relaxed, neutral placement while gripping gently with the fingertips, planting the knuckles and the heels of the hands. Exhale as you bend the elbows and aim the top of the head towards the ground. 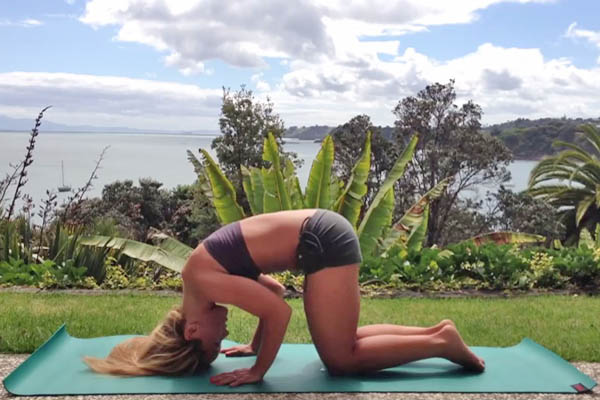 The top of the head should form the top of the triangle created by the palms and head. Be sure to move the head far enough forward so that the elbows are bent at 90 degrees when the head is placed on the ground.

Inhale as you stand the legs up and walk in as close to the hands as possible, pivoting from the hips while allowing your hamstring and lower back flexibility to take you into the prepare.

Draw the elbows in line with the shoulders by spreading the scapulae or shoulder blades away from each other and wrapping the shoulders forward and around the body. 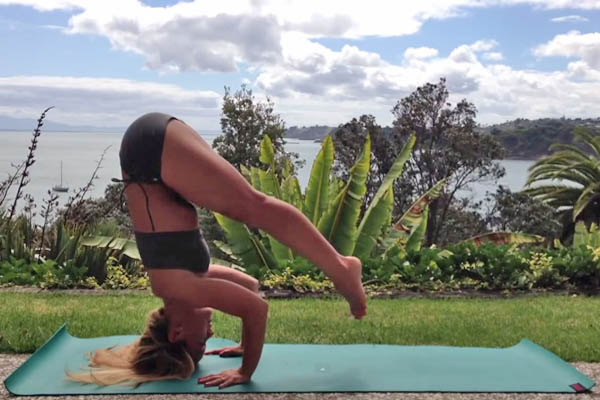 If, however, the nose tip gaze is too intense, place your gaze on a small spot slightly outwards on the mat near your hands. Exhale to stabilize and prepare. Hold this prep for 10 to 15 breaths to build shoulder and core strength and comfort in the pose. 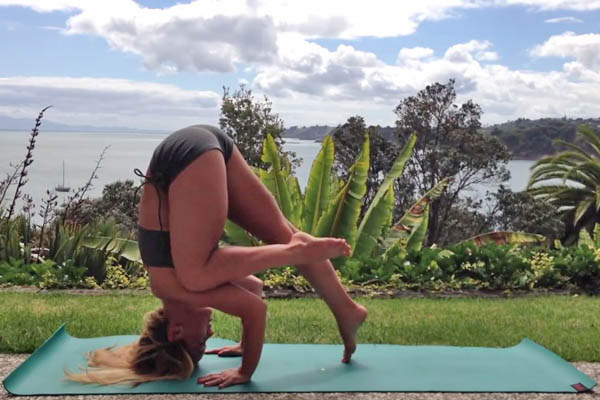 To enter the easiest version of Tripod Headstand, inhale as you draw your right knee towards the right armpit, bend the knee and point the toes upwards toward the ceiling. Stack the right knee on the shelf of the right upper arm, as close to the right armpit as possible.

Inhale again as you lift your left knee towards the left armpit, bend the knee and point the toes upwards toward the ceiling. Stack the left knee on the shelf of the left upper arm, as close to the left armpit as possible.

Draw the feet toward each other and point the toes. Stabilize your Tripod Egg Headstand. If you find this difficult, do not proceed into the full pose yet. Stay here for 5 to 10 breaths, then come down gently by opening the knees and placing both feet directly on the ground.

Stay in Child’s Pose for 5 breaths, then exhale and jump back to Four-Limbed Staff Pose (Chaturanga Dandasana). 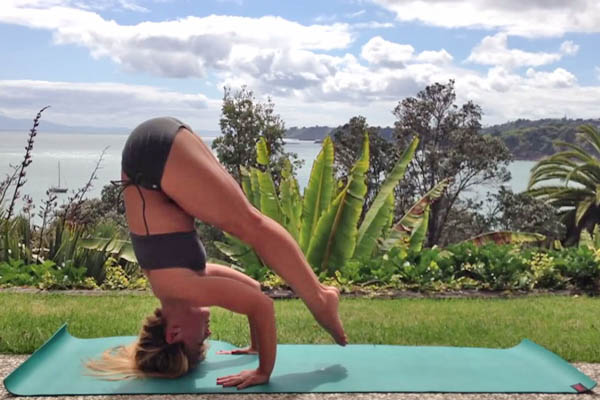 To enter the full Tripod Headstand, start off in the first prepare with straight legs and inhale as you pivot through the hip joints while sending the hips forward and engaging the core and shoulders. Allow the lift up to happen as a response to a natural lean forward.

It is not recommended to kick up into Tripod Headstand as the positioning of the neck and the shoulders is important to stabilize the pose and keep the neck safe. 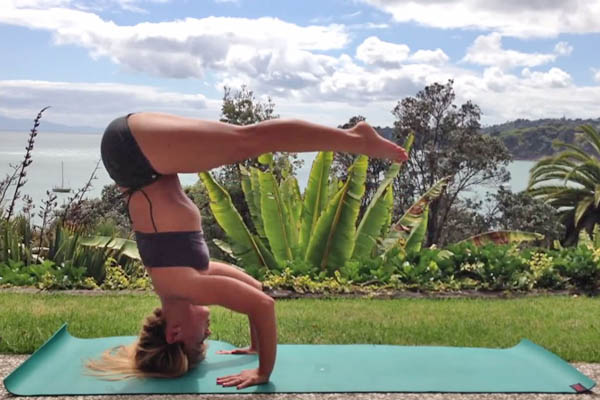 After you find the feet lifting off the ground, continue the same inhalation and movement until you reach the halfway point where your legs are parallel with the ground. Then, tuck the tailbone, draw the lower ribs in, point the toes, and activate the pelvic floor.

Think about lifting the body with the strength of the torso and the legs along the central axis. Orient your body towards the vertical center line and align all of your muscular activation along that channel. Stay for 5 breaths, then exhale and return to the halfway point. 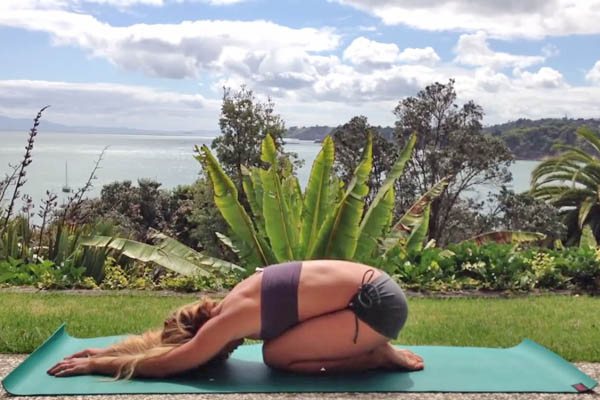 If you feel you’ve reached your limit, then exhale and return your feet all the way to the ground, resting in Child’s Pose for a few breaths, then exhale again and jump back to Chaturanga Dandasana.

If you held the pose comfortably, then once you reach the halfway point on the way down, spread your feet hips width apart, flex the feet and toes, and exhale and jump back to Chaturanga Dandasana.

How did you like trying out Tripod Headstand? Which part was the hardest for you to do? Let us know in the comments!