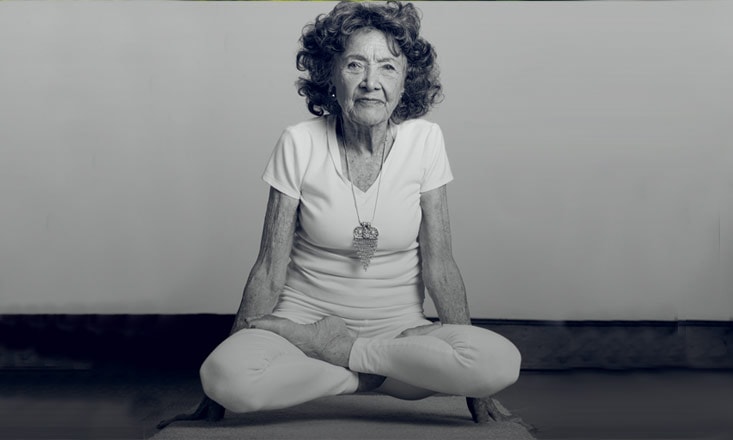 Tao Porchon-Lynch has had one heck of an exciting life, but she's not ready to slow down just yet.

The 97-year-old White Plains, NY resident was named the World's Oldest Yoga Teacher by the Guinness Book of World Records in 2012. And, although she's turning 98 next month, she still teaches yoga several times a week.

Porchon-Lynch credits her longevity to a positive attitude and a consistent yoga practice. In an interview with CBS, she shared another secret to a long and happy life: “Just take the breath of life inside of you, and feel the joy of living.”

Porchon-Lynch discovered yoga in 1927, when she was only eight years old. Although her aunt told her that yoga was unladylike, the spunky Porchon-Lynch decided to try it. The rest, as they say, is history.

Prior to becoming a “master yoga teacher,” Porchon-Lynch had the kind of adventures you only read about in books. She marched with Mahatma Gandhi in India, joined the French Resistance movement under Charles De Gaulle during World War II, and participated in protests led by Martin Luther King, Jr. She's walked the runways of Paris, danced in cabarets as a protégé of Noël Coward, and acted in Hollywood films (while giving her fellow actors free yoga lessons during breaks.)

Porchon-Lynch studied yoga with gurus like B.K.S. Iyengar, Indra Devi, and Sri Aurobindo, although she didn't consider yoga as a career path until 1968, when she got her first teaching job from Jack LaLanne. She went on to found the Yoga Teachers Alliance and the Westchester Institute of Yoga.

What's Next for Tao Porchon-Lynn?

Not one to rest on her laurels, the nonagenarian teaches six to eight yoga classes per week at a studio in Westchester County, NY.  She's still very hands-on, and as strong and flexible as ever. Also a talented ballroom dancer, she is set to travel to France next month to compete in a ballroom dancing contest.

While it's no guarantee that doing yoga can help you reach 90 and beyond, Tao Porchon-Lynn is proof positive that with yoga, an adventure spirit, and a positive, can-do attitude, you too can achieve great things!

Do you think yoga is the fountain of life, or are good genes (and good karma) to thank for Porchon-Lynn's longevity? Share your thoughts with us in the comments!