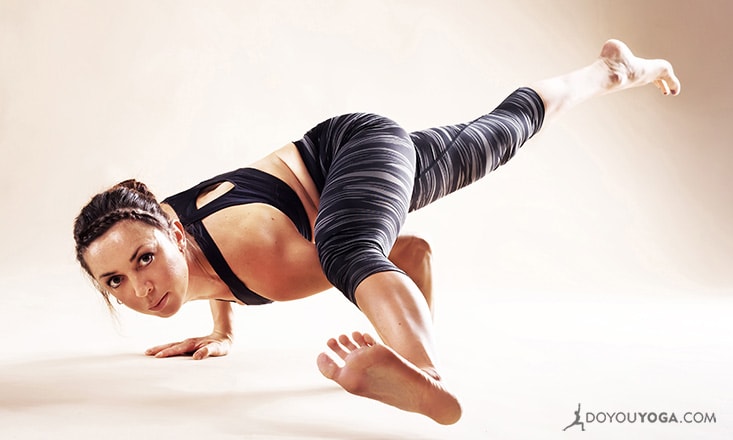 I extend the arm of comfort to a friend. She sits with her head in her hands.

“I just want to be a good yogi,” she wails. “But I’ve messed up again. I don’t understand why I just can’t stay on the path. It’s like I have too people inside of me—one is just so naughty and the other is perfect and pure.”

Guilt-ridden and slightly ashamed of my party-hard, career-hungry, cutthroat, ball-busting, where-is-the-compassion past, I threw myself head first onto the path of yoga. I set up a set of structures around me that I thought would ensure I could be nothing but a good girl.

I no longer drank, smoked, partied, ate anything that wasn’t purchased from Whole Foods, or had sex.

During this phase, everything playful went out of my life as I tried in earnest to reach enlightenment. I was more miserable now than I had been before.

I was trying so hard to be something else, I forgot to be me. I thought I had to cast off who I was before and become someone completely different. I was confident that if I put in the work, I would emerge from the cocoon of spiritual conformity as some kind of virtuous, vice-free butterfly. Instead, I realized…

I am just built to be a little bit "bad," but this badness doesn’t make me a bad person or a bad yogi.~Katherine Smith

It’s true; we do need to put in the work to transition and transform. But isn’t it important that yoga doesn’t become just another thing that we’re not good enough at? The world is already rife with so much ‘try harder and do better’ thinking, we don’t need to apply it to the practice of yoga, too.

What if we just accepted we’re perfect, just the way we are, with some room for refinements? What if, in our wildest moment, when we are caught up on instinct, or the moment, or both, we are fulfilling who we are meant to be?

What if all those things we sort of suck at make us real? What if all of our bitchy, bad girl bits just make us a little bit bad-ass?

Being bad-ass is an attitude that can be worn with pride.

If yoga is intended to be freeing, it doesn’t seem to make sense to me to mindlessly adopt its rules and belief systems, applying restrictions to our lives and attempting abstinence without understanding why we’re doing it. It only results in repression and frustration.

More than once, I’ve broken down in tears because I was doing everything by the book and it didn’t deliver the desired result. I would see it as failure and it would maintain my belief of not being good enough.

It reinforced a perception that I was a bad yogi—a spiritual failure and not deserving of help and healing.

The truth is we have to discover our own path and what it means for us. Being bad-ass says, “I know who I am and I’m not afraid to own my destiny. Your approval is not required. We break your rules and then we make them.”

It is a very good idea to have a little direction from a teacher, but do not let it compromise the voice of your inner teacher. Adopt a practice and a discipline—it can be beneficial, but NOT if it is detrimental to our own intelligence, intuition, or integrity.

Read and research the words of others, let their wisdom inspire you, but be careful about blindly abiding by them just because someone said so.

All too often, in an effort to behave, we forget how to be.

Within each of us, there is lightness and dark. There is the Yin and the Yang—polar opposites and yet utterly intrinsic to one another. We need both. Yet somewhere in the grand history of time we began to perceive one as positive and one as negative, and the duality of good versus bad was born.

So much of what we feel is created from the social benchmark we have been conditioned into thinking: that shape those pesky ‘shoulds ‘and ‘should nots’ that dictate how to be and how to behave.

In one ancient Native American legend, an old Cherokee is teaching his grandson about life. “There is a terrible war inside of me,” he says. “It is between two wolves. One wolf is evil. He represents anger, envy, and ego. The other represents joy, peace, and love.”

Afraid, the boy asks, “Which one will win?”

The grandfather replies, “Whichever one you feed.”

In other words, do the things that make you feel good, that make your heart expand and your skin glow. A teacher in India once said to me, there is no trying, only doing. So stop trying to be anything other than your most authentic self. Let your inner bad-ass bitch breathe, and get busy being.