Why Meditation Truly and Utterly Sucks 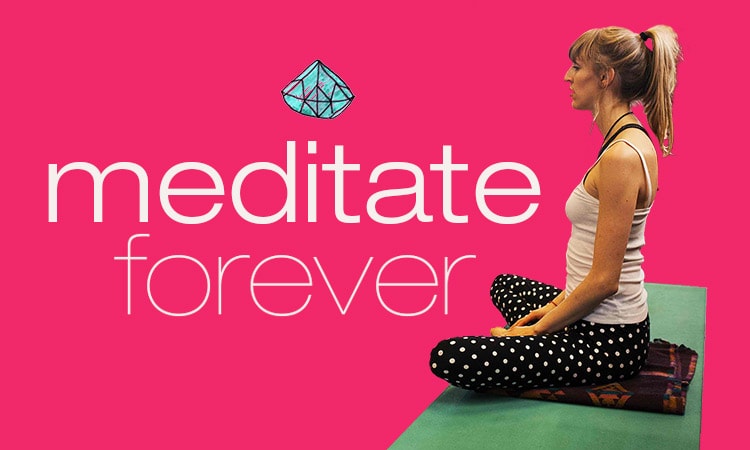 You’ve seen those images, yeah? The ones of a serene (and usually sexy) yogi, sitting atop a mountain with a stream trickling slowly by. The blue sky glimmers above while her peaceful face, all soft and stress-free, seems to just mock your total inability to sit still for 2.45 seconds.

I’ve seen those pictures too, and trust me, my first attempt at meditation looked nothing like this.

About six years ago, I stayed after a yoga class for a free meditation. It was what I would classify at the time as a massive disaster. I pretty much had an internal panic attack where I wanted to scream and rip somebody’s head off because I had no idea why or how everyone was sitting so damn still.

My back killed, my shoulders were strangling my ears, and my mind was planning about three years down the road. I was really pissed off at everyone in my vicinity for no real reason other than they seemed to be succeeding at this stupid game.

Afterwards, I cried. Mainly because I’d concocted a whole internal dialogue of anger at the teacher for “forcing me to do this,” irritation that I sucked so hard at meditation, and just plain frustration that I wasn’t at all peaceful.

I thought it would be easy like the picture of Sexy Yogi showed, but instead it was just total pandemonium.

Meditation Is A Process

It wasn’t until years later that meditation started to feel like a natural and manageable process. It took a lot of sitting in discomfort, counting the seconds, and being the puppet-master of my own internal show of horrors, until I started to see some glimmers of how Mountain Top Yogi did it.

There was no trick or formula that took me from banshee to buddha. Instead (irritatingly enough), it was just practice. It’s kind of like when you start practicing yoga and all you want to do is be able to hold yourself in Down-Dog with some grace and that’s like the biggest goal of your life.

Then you forget about it for a while, until one day you find that you’re actually doing it—and it’s not such a big deal after all.

It Is What It Is

Yes, meditation is challenging. You’ll always have thoughts, there will always be a new spot on your body that aches, and yes—you can always find things to blame for it not going to plan: your phone rings, someone comes in the room, or you can’t find your favourite meditation cushion.

Truth is though, bud—like with all things, you just have to keep showing up. You have to practice, dabble with consistency, and not get too swept up in judging whether it was “successful” or “total shit.” The motto of the game becomes ‘it is what it is.’

So let it suck and let the anger roll through you and let whatever happens happen and then show up and do the little pony ride again. And then again. Oh and wait—again. And without any expectation or goals, just keep doing it.

One day you might find (just maybe) that the clouds have parted and that the glimmering blue sky is shimmering above you on your own little mountain top, wherever that may be.