What is Dream Yoga and How is it Practiced? 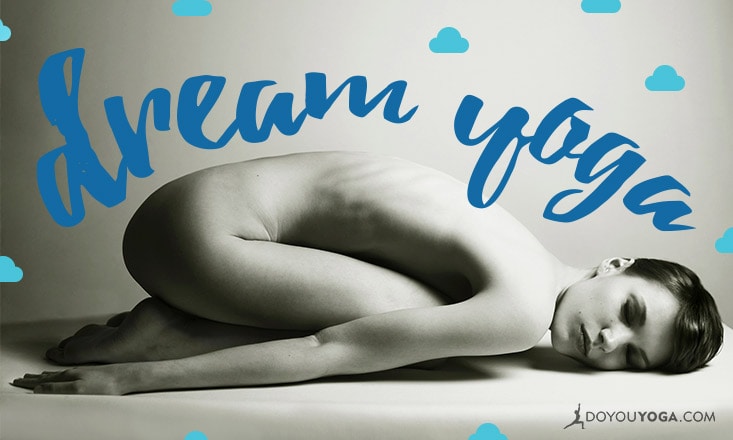 Despite how it sounds, dream yoga doesn’t involve dreaming about handstands – fun and all as that may be! Rather, it returns to the root of yoga – to yoke.

In this case, the unconscious and the conscious, left and right brains, or of course, ha (sun) and tha (moon).

What is Dream Yoga?

Dream yoga offers the chance to develop our practice during the third of our life we spend asleep. Even more than that, it allows us access to the unified field of the dreaming mind, or the common subconscious (as Jung called it) – the dimension upon which this waking dream is based.

By becoming aware in our dreams, we can engage with the tectonic plates of our consciousness and thereby change the world as we know it from within – affecting not only our own moods and bodies, but even helping to heal and help others as well!

There are many aspects and schools, but Tibetan dream yoga is perhaps the best-documented, with texts spanning the earliest scriptures to contemporary writings, including by the current Dalai Lama. As with many elements of Buddhism, the texts are highly specific and instructive.

But even for those with no interest in Buddhism, the work of university researchers since the 1970’s have confirmed the mechanics and potentialities of dream yoga practice.

Known mainly in the west as lucid dreaming, the simplicity of the practise belies its awesome power, as with so many yogic practices. Lucid dreaming simply means becoming aware that you’re dreaming while in the dream.

Once aware, the dreamer can then engage with the realities present with a level of freedom that is impossible in the physical world. (Note, however, that even in one’s own dreams one is not in control – rather, like a good sailor one can navigate the oceans of the subconscious while not assuming that one is master of the seas.)

Want to lie on a sun-kissed beach? Flip up into Scorpion pose? Heal that niggling injury? These things are all well within the reach of the lucid dreamer. You can explore realities as mundane as sex and skateboarding, or as sublime as communion with great teachers, or even enlightenment.

What you choose to do in your dreams in personal, but it is said that spiritual practice is 9 times more powerful when in the dream state. So saying a mantra, doing asanas and especially meditation (which is challenging in waking life, never mind dreaming) can have hugely accelerated effects.

Techniques for lucidity overlap between the yogic and Western scientific traditions: both agree that as much effort is needed during the day as by night.

One key practice is the “state check,” the constant interrogation of one’s reality to explore whether one is sleeping or dreaming – at this very moment. Once you start this habit, the borderline between the two states becomes more and more fluid – in fact, how do you know that you’re not dreaming right now?

For more information, check out the website of Buddhist lucid dream teacher Charlie Morley and the work of Stanford University researcher Stephen LaBerge. Both offer insights that can make the time you sleep an exciting part of your yoga practice.

And don’t worry, you’re not losing sleep! In fact, lucidity brings dramatic feelings of energy and well-being to the waking hours. And who doesn’t like a practice you can do lying down?