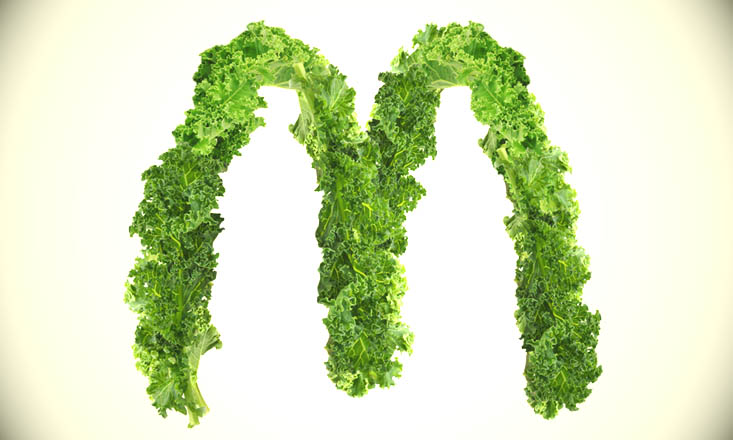 For nearly 60 years, it’s been serving trays and trays of Big Macs, apple pies, McNuggets, French fries, and Egg McMuffins. Now, it’s pruning its all-American menu by adopting the most coveted, most celebrated, most buzzed about health food of the last five years: kale.

Yep, you heard that right—the granddaddy of all things deep fried and salted to oblivion is now hopping aboard the local farmer’s market bandwagon, and putting kale on offer to lure more calorie-conscious, vegetable-munching customers.

It Ain’t Easy Being Green

Just months ago, in a TV commercial highlighting the quality of the beef in the Big Mac, the fast food giant smugly threw jabs at quinoa, soy, and kale. “You can’t get juiciness like this from soy or quinoa,” a voice quips over a tight camera shot of a moist Big Mac patty. “Nor will it ever be kale.”

Just recently, however, McDonald’s has confirmed that it will be debuting $4 breakfast bowls featuring kale, spinach, turkey sausage, and egg whites in nine locations across Southern California, a move that seems targeted at consumers who are as nutrition-savvy as they are hungry.

This kale breakfast bowl announcement comes hot off the heels of other notable menu changes made by the company, such as the decision to exclusively source chickens raised sans antibiotics, or the addition of fresh Cuties California clementines to kids’ Happy Meals while the fruit is in season.

As part of efforts to accommodate health-conscious consumers, McDonald’s is also listing low-fat milk, as well as fat-free chocolate milk devoid of artificial growth hormones in cows, on its menu.

The burger behemoth’s recent menu touchups seem to have been spurred by an unshakable decline in sales and market value in the past year. This becomes even more troubling as gourmet burger outfits like Shake Shack and Habit are winning both customers AND stockholders over more and more.

“Consumer needs and preferences have changed,” McDonald’s notes. Its goal is to reinvent itself “as a modern, progressive burger company,” implying a commitment to innovating according to consumer demands and behaviors, including a newfound appetite for nutrient-dense leafy green superfoods.

While the introduction of quintessential health food kale to the company’s menu seems like a universally good gesture, the future of McDonald’s still lies on its customers’ burger-gripping or green smoothie-toting hands.

What do you think, yogis? Will you try McDonald's kale breakfast bowl if you're in Southern California, or if it picks up and becomes available in your town? Or would you rather make your own homemade kale salad? Share your comments and thoughts with the DOYOU community!