The 3 Stages of a Yogi’s Transformation 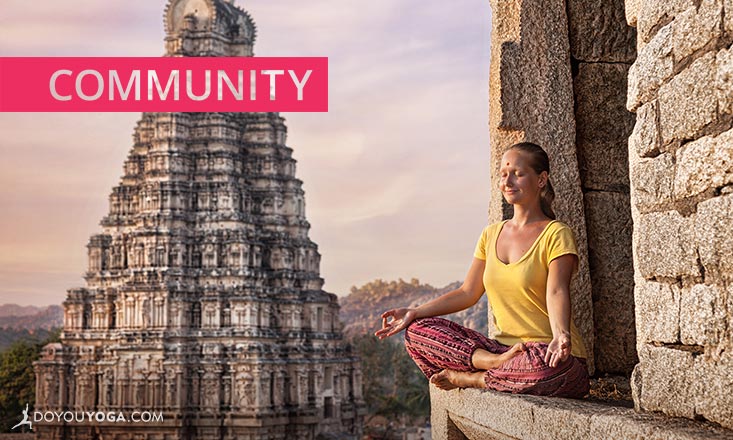 Yoga is often practiced inside a studio with four walls, and stepping into that space is the first action in a therapeutic process. Ritual studies (the examination of how cultural rituals work) calls this first step across a threshold a "submission."

Much has been written about ritual and its symbols; yet as yoga practice expands our awareness, and its relationship to public life, it’s good to take note of the ritual we call yoga.

In a military setting, steps to submission are clear cut. A recruit appears for training at the appointed hour and they get a short haircut and uniform. Recruits are immersed into a ritualized process, a clear separation from their previous life. The recruit’s ego may not be broken, but they are taught submission.

Psychologists tell us three questions of identity, and 'belonging' immediately comes to mind in every group: who’s here, who’s in charge, where do I fit. These questions are quickly answered for the recruit. Military initiates, after going through the submission process, are bent and shaped to learn their new roles.

In yoga, however, the submission process is voluntary. Separation from one’s old life is usually temporary—often just an hour at a time. But as the yoga student submits to the process, they join all others in a common identity as students–there is no rank – and everyone is invited to release distracting personal issues, concerns or worries.

In the intense process of containment, recruits are assigned rank, but yogis dispense with rank or social status. In the container, personal property and artifacts are left outside. At the studio I attend, a sign on the door also reminds yogis of a place set apart.

Within the ritual container, space is a sacred training ground. Although the demands on the yogi are not as extreme as in the military, yogis are focused as they begin ritual posture, breath and meditation.

The container ritualizes increased physical demands on the yogi while they work on endurance, concentration, and balance. Containment and ritual have a combined power to magnify demands and bring them to the apex of the yogi’s attention.

A yogi isn’t required to stay in the container, so any pressure on the yogi is from themselves and this can be positive or negative.

The yogi submits to self-pressure because they believe the container provides healing. The yogi hears unified and steady breathing from other initiates; they may embody a posture of prayer with hands folded at heart center. They experience moments to let go, chant A-U-M or meditate upon the sound of a bell at the conclusion of class.

The yogi is aware that he/she is in a sacred space, where they can expect minor miracles or perhaps even a mystical encounter, referred to in religion as direct experience with God. But neither the yogi nor the recruit can remain in the ritual container. They return over the threshold back to lives on the outside where they enact new thinking and being.

Enactment is the yogi or recruit’s new behavior built upon the skills they’ve learned by submission, and by entering the container to do their work.

For the recruit working in the container for many weeks or months, a personal identity may change, but there is no ambiguity about their professional identity. They live out new roles according to rank with its well-defined requirements and rules.

Meanwhile, the yogi’s insights from work in sacred space are often linked to personal changes. Professionally, the yogi may remain as they are, or they may choose a new path. This doesn’t mean that it ruins your current life; but it will change your priorities and raise new questions about life.

Yoga will change the yogi's future because they will make decisions based on new values.

Think of a yogi being moved through their several months' experience with a good ritual teacher in an effective container. If the yogi is faithful, the ritual of yoga will do its work.

Perhaps they start thinking they want to change their diet, their habits, their prayers, or careers. Maybe they will be drawn to new forms of music or begin to explore creative endeavors and new art. Small changes happen easily, but small changes lead to bigger changes and the yogi might think about making big life decisions like shifting careers or moving to a different country.

All these new changes might be difficult for others to understand and accept; some watching from a distance might say the yogi has ruined his/her life. But in the container, the yogi’s will grows stronger while the importance of others’ opinions fades.

When one mends broken wings and becomes strong in the broken places, the yogi’s flight will chart untraveled courses and find new landings. Enactment into a new identity is almost always risky. The yogi might have to plan, sacrifice, and experience uncomfortable days, but they will be more whole.

And once these three stages have been crossed and completed, then the yogi might best be described – in the words of an old farm saying – like a “thump-ripe melon”; sweet and messy, and with a newfound perspective on life and personal identity.