The Inflexible, Weak and Not-So-Good Yogi 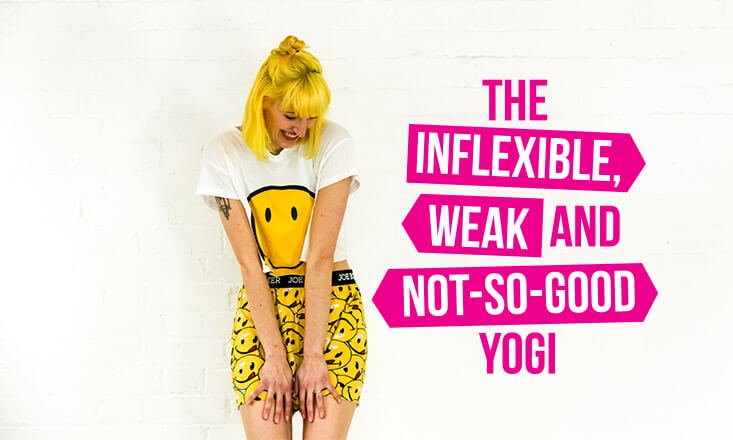 When I first started practicing yoga, I was a total physical weakling. I was sure I was in tip-top shape though because when you work-out in high school it stays with you forever, right?!

You’ll be delighted to know that I was a competitive cheerleader for five years as a teenager. Yes, it was like Bring It On except less mean, less fancy and more Canadian.

I was tall and not very flexible, but somehow, because other people thought I was flexible, I assumed I was too — even though there was no evidence to suggest this as fact.

I had to force my fingers to just barely graze my toes in any type of forward fold and just wait until I leak the VHS of us winning Provincials in 2000. My spirit was on point but my toe-touch jumps were spastic.

‏Fast forward five years and you’ll see gangly me at my first dynamic Vinyasa Yoga class. I was pretty sure everyone there was glad I was in attendance to set the new precedent for least flexible and least strong yoga student ever.

I was self-conscious, inflexible, wobbly and ego-strong, forcing my fingers to toe-tips with every ounce of energy I could muster. My celery arms almost snapped in Plank pose and let’s just give a big “pfft, yeah right!” to any suggestion of down-dog as a resting pose.

It was so effing hard and I most certainly wasn’t “good” at it.

If I’d have used the excuse I hear all the time: “I don’t do yoga because I’m not very flexible,” I never would have gone to yoga, continued with yoga and ta-da, gotten flexible.

I also learned in yoga class that I wasn’t very strong. Or peaceful. Or accepting of my lot in life as a Human Being.

My ego was often quietly flaring up as I wondered why I couldn’t just bypass my inept Chaturanga attempts and uncomfortable Ujjayi breathing, and just be fit, sexy and spiritually awakened already.

I learned pretty quickly (but not easily) that I had to do the work.

I also learned that if I let go of trying to control and master it, that the yoga would do some of the work for me. There was a good stretch of time where I was pretty goal-oriented on Enlightenment. I’m sure you can guess how that went (#notverywell).

I enjoyed a steady stream of inner dialogue that went something like this:

Breathe in. Breathe out. Be yogic. That’s it, stay relaxed and loving. Love yourself. Love everyone. Even that annoyingly flexible woman over there. Send her compassion. Damn it though, she’s pretty effing strong. Focus on yourself, Lacey. Have beautiful thoughts. You really do suck at this pose though. I can’t wait to go home and watch Buffy.

I had / have a busy mind and was at odds with myself about it. All I wanted was to go from zero to Guru in three easy steps.

I tried to force myself into a peaceful submission of perpetual Namaste’s and it didn’t work.

I began to learn through my practice that part of loving myself was in accepting my own humanity.

Instead of being an annoyance (blast you, Mind! blast you, Spaghetti Muscles!) I began very slowly to embrace it. Of course, like you, I’m thankfully also a spiritual being. Something that I learn again and again, is not to fight the playful dance that exists between my own humanity (and ego) with my spiritual and divine nature.

I still bask / struggle within the physical component of yoga and sometimes get wrapped up in this layer of my practice, but mostly now, I can intentionally use my connection to breath to take me deeper — into a place where I have a broader perspective on who I am and how I fit into and connect with this universe.

It’s a journey and the only thing to do is keep practicing.

When I was a kid, I have a memory of saying to my mother and brother that I wanted to be okay with not being perfect.

Just the other day, I listened to Cheryl Strayed say that most of us don’t even like perfect people. The truth is, we don’t trust them because we know they’re hiding something — they’re hiding their own humanity.

There is so much to be gained for each of us if we choose to foster more humanity in this overly shellacked world of Insta this and consumer that. We can foster more connections and love when we each step up and show the truth of who we are.

When I came to yoga it was not because I consciously wanted to connect to the divine. At all.

I would never have even used the word “divine.” And although I do believe that we all share similar motivations — like a desire for love, meaning and connection — more often than not, we’re not even aware of this and don’t know how to articulate it. So we start with what’s easier to connect to — the physical.

We can touch it, we can see it, we can feel it. We go to yoga so that our bums look nice in tights. Then maybe at some point, we stop caring so much about our bums and start caring about our hearts and souls.

It is a journey though. It’s never complete. It’s a work in progress and we’re all keeping pace differently. We must remember to embrace our own humanity, which can bridge the gap and help each of us to accept one another more fully, regardless of where we are on our own unique paths.

Perfection (in the dictionary sense of being faultless) is impossible for human beings to attain.

The reason we can never achieve it is not because we’re lazy or inferior, it’s because the thing we’re lusting after isn’t part of the lexicon of being human. What we can achieve though is a type of perfection, a much richer one — one that embraces the faults and messy bits as perfectly placed pieces in the puzzle of this existence.

Part of my journey has been learning that to be yogic is not about doing away with my own humanity in order to be become a shiny spiritual angel.

Being yogic for me is about accepting all aspects of this human life. It is about surrender. It is Sthira and Sukha (steadiness and ease) and a willingness to keep learning, even if it’s the same lesson again and again.

It’s about tuning my dial to a frequency of positivity and peace and then loving myself even when my frequencies get hijacked by anger and dissatisfaction.

I’m a yoga teacher and a meditation guide. I’m a writer and creative. I’m a wife, daughter, sister and friend. I am a spiritual starship. I’m a soul. AND I’m a human.

Learning to embrace my own humanness is one of the lessons that keeps coming up for me. What about you? What lesson is currently at centre stage on your yoga mat?