The Inclusive Practice Of Yoga: Accepting Any And ALL Applicants 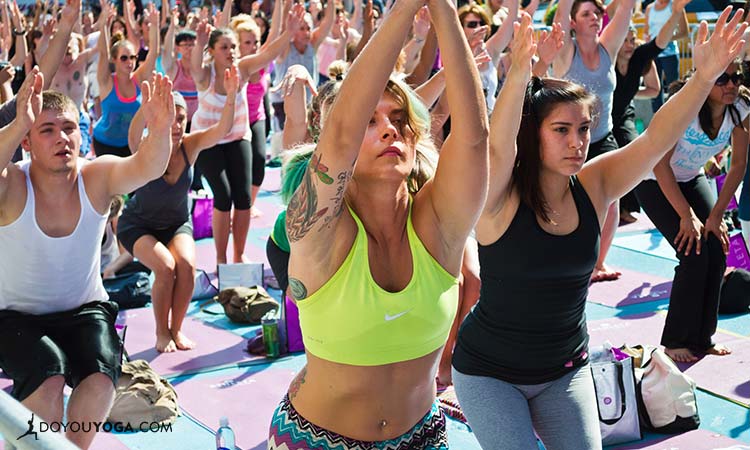 I was fortunate enough to grow up with an active lifestyle as a kid. I rode horses all throughout childhood, swam and ran in high school, and took up rock climbing in college. I loved being outside, but because of my own insecurities as an adolescent (stumbly, clumsy feet and less-than-awesome hand-eye coordination), I never played team sports involving throwing, catching, or hitting.

I could glide through the water or scale a fence in one leap, but winced if a softball came my way. Somehow, I just knew it was going to hit me in the face. Even from the bleachers though, I had a great respect for those athletes and their talents. However, I knew that my own talents were rooted elsewhere.

After all, I could calm a horse with my voice and touch, I could swim like a ducky with my flat, paddle-like feet, and I could climb a tree like it was my job thanks to those long, clumsy monkey limbs. So it didn’t really bother me to do other things while the jock-types threw balls around and tackled each other. That is until I found two sports in which I really, really wanted to participate: gymnastics and dance.

On Gymnasts And Dancers

The way gymnasts and dancers move is unlike anything else. They are captivating, awe-inspiring, and so controlled. I’ve always wanted to move my body like that and flip and float through the air, gracefully. Unfortunately, I didn’t really grow into my body until my late teens/early 20’s. *Side note: I am still figuring out how this miraculous meat suit works and moves. It didn’t come with an operator’s manual.*

So, when I showed interest in these sports in early college, I was snickered at, eyes were rolled, and the responses led me to believe that—at the ripe old age of 19—I was far too ancient and rickety to take up either of these sports. Apparently, training for dance and gymnastics begins in the womb. I was dismissed, laughed at, and couldn’t get my foot in the door anywhere.

The best I could get was a kind man who helped me learn to barely do a back handspring and followed with, “I’d just be happy with that and call it a day.” So, I did.

Then, I Found Yoga.

I showed up as a rock climber, headstrong and boisterous, ready to force my body into any position it could take. I’m also the curious type, though. So when I couldn’t do half the stuff the teacher called out, I didn’t feel defeated—rather, my interest was piqued. After my first class, I was bound to go back and learn those shapes.

One class led to two, to four, to eight, and eventually to a regular daily, or even twice daily, practice. I was overwhelmed with joy by all of the diversity in those classes: moms, kids, grandparents, new and seasoned practitioners alike, all there to enjoy their time on the mat and connect with themselves and with one another.

Yoga Is For Everyone

This is truly the best part of yoga: anyone and everyone can practice. I have taught and taken classes with kids as young as three or four, and adults in their eighties and even one fiery woman who was coming close to a full century of life. There is no snickering, no rolling of the eyes when someone shows up at any point in their life and declares, “I want to practice yoga today.”

Yoga has many, varied styles ranging from the restorative and relaxed to the upbeat and active, and everything in between. There is laughter yoga, acro yoga, yin yoga, yoga with chocolate, yoga with wine, yoga in the nude, and the list goes on and on. This is everyone’s practice, not owned or controlled by one group or one brand.

This philosophy of self-acceptance, love, light, and peace is made for, crafted by, and accessible to all.

Yoga is hiring any and all applicants and you’re guaranteed a position. You make your own schedule, there is no dress code, you have no boss nor any staff to oversee, and your compensation is worth more than all of the currency in the world combined. Come as you are, and you won’t ever have to fear being rejected, turned away, or made to feel like you are anything less than imperfectly perfect and radiant.

This is your practice, our practice. There is no right or wrong to it. Take a deep breath, and step into your new office. Shine on.