The Beginner’s Guide to Creating a Meditation Habit That Lasts 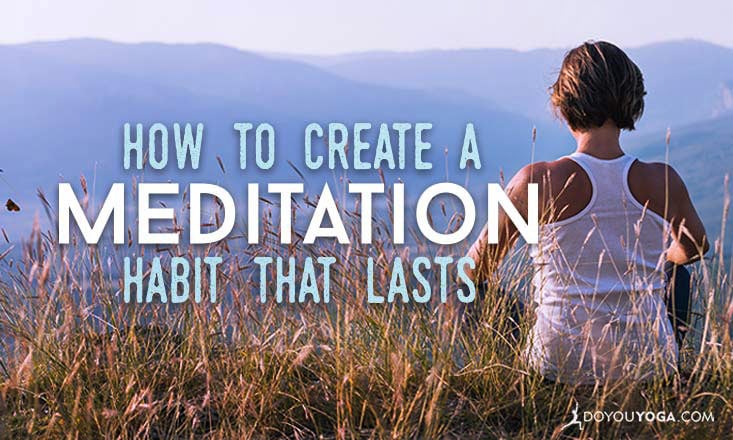 Do you want to create a meditation habit that lasts? Because…if you want to get real benefits, you need an approach to meditation that survives the inevitable highs and lows of your practice. The most common question I get is “How can I make meditation an enduring habit?”

Luckily, we live in amazing times when the science of habit creation is flowering. I want to share some of these findings with you. And I’ve created a simple beginner’s guide that will help you translate the science into a simple plan to make meditation a bona fide habit that lasts.

The Sweet Spot for Habit Creation

A 2009 study from University College London found that the sweet spot for creating new habits is 66 days. It’s popular to say that a new habit takes 30 days to create, but there’s actually no science to support that claim.

It’s important to remember that while the results in the study varied for everyone, 66 days was the all-important average. So it’s pretty safe to assume that you should give yourself a little more than two months of practice to create a meditation habit.

What’s so special about 66 days? Well, a new behavior becomes a habit at the magical moment it becomes automatic. ‘Automaticity’ is the neurological phenomenon referring to the moment when the amount of energy required by your brain to carry out your new behavior plummets.

A new behavior becomes automatic after your brain has worn a new groove into your neural circuitry. At that point, your brain has to make a fraction of the effort to get you onto that meditation cushion. That’s the magic of automaticity.

The Odds Are Against Us

So why is it important for you to achieve ‘automaticity?’

Research cited by the Benson Henry Institute tracked people’s new behaviors related to New Year’s resolutions. After just one month into the New Year, only 60 percent of us are keeping up with our resolutions.

Five months later, that percentage gets cut by more than half, and then it’s a steady decline to an 8 percent success rate, meaning only 8 percent of us actually fulfill our new habits tied to our New Year’s resolutions.

How to Hack the Habit Loop

But don’t lose hope. A recent book by Charles Duhigg called “The Power of Habit” provides amazing insight into how habits are created.

Habits follow very predictable patterns of creation called habit loops. And the good news is that you and I can hack the habit loop.

Here’s how it works. Every habit starts with a cue or trigger. For me, my meditation cue is finishing my cup of coffee first thing after I wake up. The next two steps in the habit loop are routines and rewards.

My routine is sitting on my meditation cushion and practicing my specific meditation technique. My reward is the immediate and long-term relief I get from my crazy mind and hyperactive thoughts.

Cue + Routine + Reward = Your Habit Loop. That’s the simple equation that you need to master to make meditation a habit.

Now that you know some of the basic research and have a pretty good grasp on how habits are formed, it’s time to put it into practice. Here’s a simple plan to harness the habit loop and develop your own bulletproof meditation habit.

First, decide how long you want to meditate. Keep it simple. Maybe start with 5 to 10 minutes. It needs to be modest enough that it’s not a hurdle. Then, pick a practice technique and stick with it for the whole time. Finally, commit to doing this practice for 66 days.

You need a reliable trigger. For me, it’s my morning cup of coffee. For you, it could be making your bed, brushing your teeth, or finishing your morning yoga routine. I think it’s best to meditate in the morning, so that morning cup of java works like a charm for me.

3. Map out your routine.

Be clear about your routine in advance so you don’t waste any time, energy, or willpower on it. You want to lock down this routine before you start. So be clear about where you’re going to meditate and when, and stick with the same practice for 66 days.

Whatever you choose, be clear about it upfront, and then be consistent.

We all need support. Set up someone you can report to each day to say whether you practiced or not. You can also set negative consequences like promising to pay someone money if you don’t follow through.

Another form of accountability is making a public announcement of your intention to friends or on Facebook. Whatever it is, you need to be accountable to someone or some consequence bigger than you.

If you’re sailing along and feeling good, try to inch up the amount of time you practice. Even if you’re feeling super confident, I would make small changes—nothing dramatic. You want the odds stacked in your favor.

If you stick to this simple six-step plan, you’ll be on your way to creating a bulletproof meditation habit in no time. Now you have everything you need to succeed.