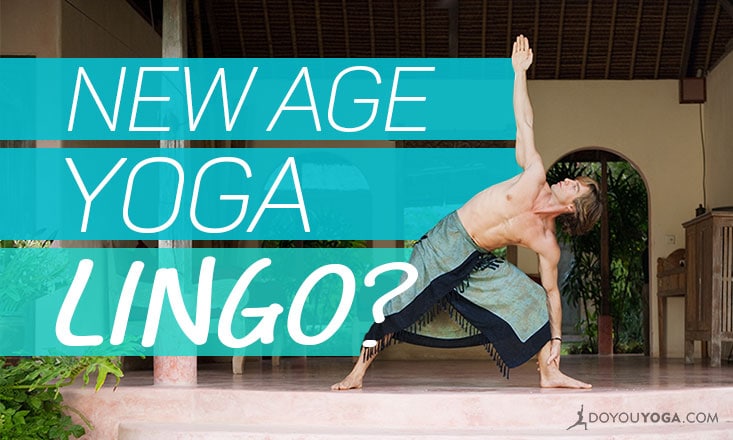 Every community has its own dialect.

When you exist within a subculture, there are colloquial terms that help define the vibe. In some ways, it’s insider speak—to exclude others from understanding—and in other ways it is about building connections within the group.

Knowing and using the right terms mark your identity, and proves to others that you are in the know.

Like if you were a businessman/surfer/skateboarder/musician/football fan, you would probably say things like “that P&L spreadsheet was pretty gnarly, bro, but it totally shredded my tube amp because Tom Brady RULES!”

The yogasphere also has its own vernacular. There are particular "new age yoga" buzzwords that people broadcast into the cosmos.

Everyone seems to have much gratitude for all the blessings that were gifted to them at Burning Man. The rhetoric is often rooted in positivity and love towards Mother Gaia, whose chia seeds were sprouted from the sacrum of the universe in one long continuous breath.

The memorandum usually stems from the sacred sounds of bongo drums beating the vibrations of the heart chakra because we are all one as we aim to be the change we want to see in the world.

Even though I get it, and agree with the messaging—I sometimes find myself rolling my eyes so deep in the back of my head I can see my pineal gland.

There will be times when on Facebook I see a post that says, “The night air of Costa Rica vibrates through my spirit body as I fall deeper into a meditative bliss immersed in the eternal now”—and I will gag a little.

Again, not that I don’t get it, because I do—but something about the articulation can feel contrived. Even more so than if some gamer went on a 20-minute diatribe about “World of Warcraft.”

I decided I needed to drop in and go on a journey into my consciousness to examine this dry-heaving impulse.

I felt like there had to be something wrong with me. The yoga world is filled with my people. Why was I having this reaction considering that, as a yogi, I am…You know…Not supposed to be a judgmental bitch.

After some time spent in the recesses of my soul, I realized that what I was feeling when people spout their New Age lingo that makes me want to puke in my mouth is an inclination to shout, “Just shut up and experience it!”

This is the issue. The yoga semantics are actually attempting to discuss the most profound and complex elements of reality. It’s outside of the margins of science, and extends deep into the eternal mysteriousness of existence.

This knowledge can’t be explained within the confines of language because it’s beyond what words could ever express.

There is an eternal truth that we all have within is. The guru inside knows all the unexplainable, but it cannot explain it to us through the lens of the ego.

Why Talk Is Cheap in the Metaphysical World

It is our ego selves that demand to talk, not our higher selves. Our souls don’t need an internal or external dialogue, because the simple act of trying to say something is limiting. That’s why when we meditate, we try to turn off that voice in our head.

Speaking to each other helps us to communicate on the earthly plane, but then so much is lost on the astral plane.

Words and language are highly influenced by socialization, conditioning, and cultural definitions. These are all things that separate us from each other.

When we use phrases like, “I love you,” it can mean a variety to things to different people. We all have our own baggage that goes with what is being said, and, as a consequence, it cannot be divorced from assumptions.

The best way to really know someone’s essence is to look in their eyes and connect telepathically. In order to truly understand nature, you have to sit in silence and just be. The moments where we quiet the voices are when we can actually start to hear.