On Living Yoga and Seizing the Day 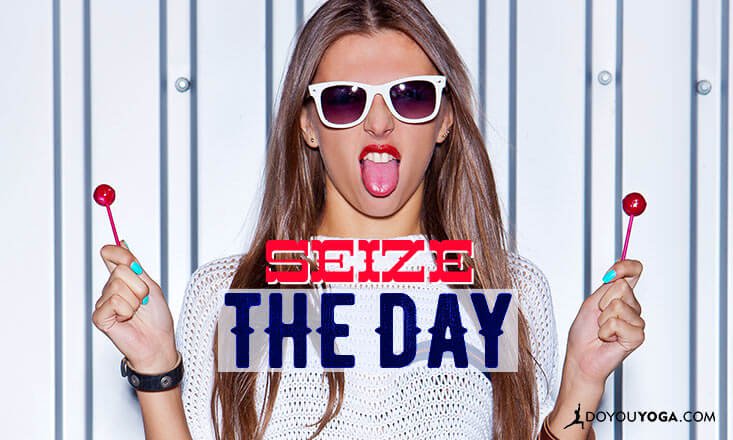 Once again I seem to find inspiration while flying on a plane.

On my air ride from New York to San Diego, I was originally booked in a middle seat. The flight was sold out and I was dreading the prospect of tight quarters for six long hours.

A few days before departure, I checked the status online and was amazed to see several aisle seats up for grabs. I changed my location right away.

Fast forward to the actual plane, I sit down and there is a man—about six feet tall—stuck in the middle seat. His knees were tightly bunched up against the row in front, and he also looked squeezed in from the right and left. I looked at him with eyes of compassion, as this was my dreaded seat only a few days ago.

The flight attendant made the announcement over the loud speaker that the forward boarding door had just been closed and I looked around in surprise. There was an empty aisle seat diagonally from our row with no one in the middle, and another free aisle a few rows behind.

I turned to my neighbor and asked, “Would you like to move to that empty aisle seat?” I think to myself, what an opportunity to create a win/win, I get more space and he can stretch out his legs.

He replies, “That sounds like a good idea, I’ll wait until after we takeoff and ask the flight attendant if I can switch.”

Internally, I wanted to scream. It felt like a time bomb was ticking.

At any moment, another passenger could get up and claim the aisle, ruining my perfect plan for more comfort and space. Ask permission? What are we in kindergarten? When the door closes it’s like the wild wild west, make a move mister!

From Seat Struggles to Thoughts on Life

I thought to myself, how often does this happen? Life offers an opening, a gift, an opportunity, and because of self-limiting crap, stagnant beliefs, or imaginary rules, we choose to stall, we fail to seize the moment and then lose what was right there for the taking.

And then, in that split second I realized, if he isn’t making a move, I need to. So I did, I grabbed my bag and made my way over to the diagonal aisle.