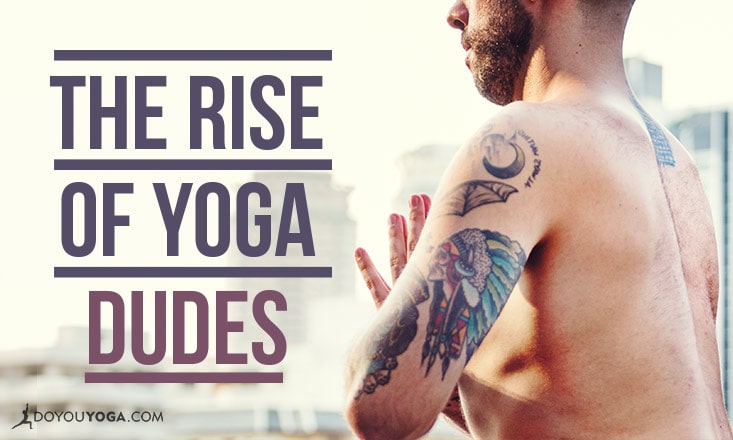 To the uninitiated, the phrase “yoga practitioner” brings to mind images of petite, limber young women bending and stretching into pretzel-like poses.

While yogis of that description certainly do exist, there are also male yogis. What’s more, their numbers are increasing. In case you haven’t noticed yet, more and more men are getting into yoga, and loving it.

These words aren’t ones a non-practitioner would normally associate with yoga, but the ancient practice is all that and more. It’s also intensely rewarding and uplifting, as any yogi will happily tell you.

Up until recently, however, yoga has been perceived as being too easy, too “spiritual,” and too (gasp!) feminine. In the past, many men, especially those who prefer to improve their health via traditionally male sports and programs, viewed yoga as an activity that’s about as appealing as watching paint dry.

Thankfully, traditional male attitudes on yoga are changing, as evidenced by the results of a recent study. According to the 2016 Yoga in America study, more men are getting on the mat. Currently, 28 percent of all yoga practitioners in the United States are male, up from 17.8 percent in 2012. That’s 10 million male yogis!

So why are more men getting their yoga on?

Mostly, it’s because of the physical and mental health benefits of yoga, like increased flexibility, improved mental focus, and pain relief. But the social benefits of yoga also play a part in its sudden spike in popularity among men.

Yoga and Dating: A Match Made in Heaven?

Joseph Alpern, a musician and yogi, told the New York Post, “[!yoga!] helps with the way that I carry myself and that’s a huge thing that girls look [!at!] it shows confidence.” He also said that he makes no effort to hide the fact that he does yoga from women he’s dating. Furthermore, Alpern believes that being a male yogi also indicates that you’re interested in a healthy lifestyle and in being fit, which helps if you’re looking for a partner with similar interests and values.

The fact that more and more professional male athletes are getting on the mat might also be helping to dispel the notion that only women can benefit from yoga. Lebron James, Kevin Garnett, Kareem Abdul-Jabbar, the Philadelphia Eagles, and the Seattle Seahawks are just a few examples.

Yoga studios that value inclusiveness and diversity are also attracting a slew of men who want to get into yoga and be assured of a welcoming space where they can stretch, bend, and meditate without judgment.

A regular yoga practice provides amazing, lifelong benefits to all yogis, regardless of gender. If you’re a male yogi (or want to be one), check out the Men’s 30 Day Yoga Challenge and gain mantastic strength, flexibility, and peace of mind.