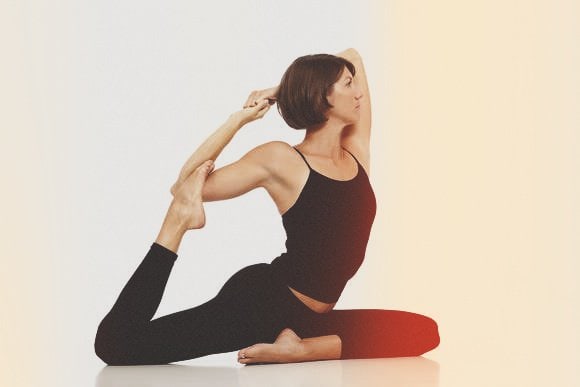 Here are some examples of poses typically performed in Jivamukti yoga classes.

This pose is named after Hanuman, a figure in Hindu mythology. This pose requires a high level of flexibility to fully execute, because the end position essentially involves doing a split with your arms raised towards the ceiling. There are, however, phases and steps you can follow to do the pose to avoid muscle strain and work only within your limits and ability.

The Dancing Shiva Pose, also known as the King Dancer Pose, is one of the yoga poses that really test your balance, focus, and concentration. It requires the ability to shift and balance all your weight on one leg, while slightly bending forward from the hip and the other leg is held up behind by your hand. Depending on your level of flexibility, you can grasp your ankle or reach for your toes by stretching your arm backward and raise your other arm in front of you to help with your balance.

The Bow Pose is performed in several styles and types of yoga classes because it effectively and simultaneously works different muscle groups and parts of the body like the arms, glutes, core, and legs. The Bow Pose basically involves lying face down on the mat and then lifting your chest and legs off the floor, with your arms stretched out behind you and hands grasping the ankles to hold the legs up.

The Peacock Pose is one of the more advanced Jivamukti Yoga poses that involve having your body lifted off the ground and supported only by your hands. The proper way of doing the Peacock Pose is by keeping your body in a straight line while it's lifted in the air, and keeping your elbows bent and close to the body. This pose requires balance and upper body strength, so don't fret if you take time learning to do and successfully perform this pose.

The Hero Pose is a good starting off point for breathing exercises and meditation. This is one of the simpler Jivamukti Yoga poses and is effective in bringing relief to tired legs. To do the pose, simply sit on the mat with your legs folded underneath your buttocks. This pose often transitions to a Reclining Hero Pose, in which you lower your upper body backward towards the floor while keeping your legs in a folded position underneath you.

These are just some of the Jivamukti Yoga poses popularly taught and performed in studio classes. Don't worry if you can't do splits yet for the Monkey Pose, or lift and balance your entire body on just your hands; you will eventually be able to do the complex poses as you progress through your yoga classes. The entire point of Jivamukti is to open yourself to the world and to all creation. This mindset is overall more important to achieving the full poses at once, although with more practice and deeper immersion into the lifestyle cultivated by Jivamukti, which also involves a vegan diet, the more your capacity for physical opening grows.