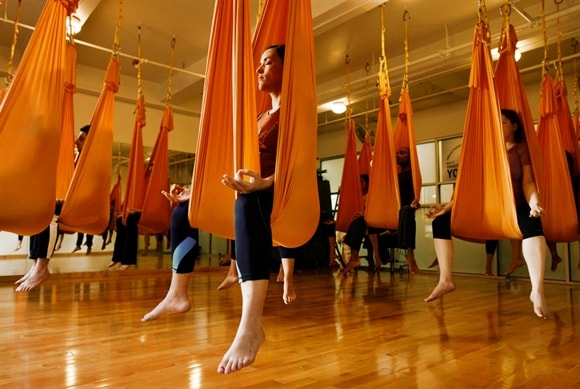 Yoga has gone through a lot of variations throughout the years. From the ancient practice, it has branched out into so many different forms, from prenatal yoga to Bikram yoga. One of the newer variations really sets itself apart from the rest: have you ever tried doing yoga in the air?

Up In the Air!

Well, not really. Essentially, Anti-Gravity Yoga, as it is known, is yoga done off the ground, suspended in a large cloth sling. Anti-Gravity Yoga was designed by Broadway aerial choreographer and former gymnast Christopher Harrison. His company has done Olympic opening numbers, as well as acrobatic concert pieces with the likes Britney Spears and other famous performers.

From Beginners to Pros, Anti-Gravity Yoga Benefits All

Anti-Gravity Yoga can look pretty daunting at first, since you'll be suspended from a wide piece of silk cloth held up by only a couple of hooks. But you'll be surprised at how strong the material is. Harrison attests that they're designed to hold up to 3,400 pounds. The slings make it easier to do inversions, so it's actually quite ideal for beginners who haven't developed strong upper body strength yet. Otherwise, the more advanced poses would require more foundational knowledge if practiced on the mat. Regular practitioners might even want to try it out. It has the benefit of relieving strain from old injuries while getting them upside down and stretched out.

Anti-Gravity Yoga isn't meant to actually replace regular yoga – but it adds a unique perspective to your practice. Not only does it have all these benefits that you would be hard-pressed to find at other places, but it can be an incredibly liberating feeling to be suspended in the air, floating and twisting with ease like an acrobat, and being safe the entire time.