How to Be Unpopular in the Yoga World 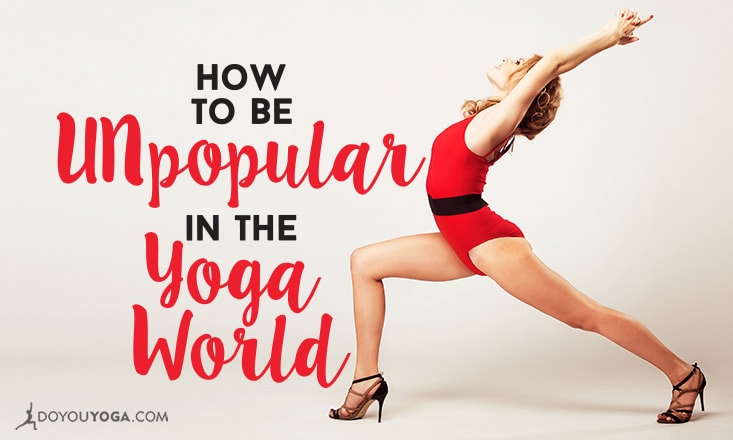 Though I have been practicing yoga for 16 years, I still feel like an outsider. The actual experience of yoga is something I feel eternally connected to. It’s just that I don’t feel connected to the community.

I have never figured out how to fit in within the yoga world, and often find myself on the energetic periphery—gazing into this group of radiant bodies like, “Hey guys, is it cool if my aura blends in with yours?”

As a yogini, I can’t point fingers and blame the yogasphere, but rather turn my gaze inward and peer inside myself (YUCK it is gross in there! I need to go to the bathroom).

I guess it all started when I was 19 and went to my first yoga class.

It was an offering as part of the dance program at my liberal arts college, and I didn’t know much about yoga beyond Madonna insisting that this was the reason her arms were so muscular. Even though I technically wasn’t like a virgin any more, I was into the idea of having Madonna’s body.

I was a very competitive person. I had played sports all my life, and equated physical activity with destroying your opponent so they would weep at their insignificance in the face of your victory.

I spent my life shit-talking to get under people’s skin so I could annihilate their self-confidence and win—and that wasn’t exactly the yoga vibe. “Pssssst. Hey…hey you…Yeah you. My Downward Dog is so much better than yours.”

It took years to extricate my desire to be better than people.

Speaking of which, aren’t you impressed by my ability to accomplish this Zen balance, and don’t you now feel inferior to me? Anyway…Comparing yourself to other people, either positively or negatively, is the root of spiritual dis-ease (the hyphen is a cleverness, right? I like it).

The only way to address this impulse is to send love to the person who is the target of your ego. Yet my competitive instincts didn’t totally disappear, and instead transmuted to where I am hypercompetitive with myself—which is also frowned upon.

No one really wants to hear about how on the solstice I did 108 Sun Salutations doing the most challenging sequence offered and didn’t take one break. Most yogis will respond that I am motivated by the wrong force, which I don’t think is very Star Wars of them, so ha!

Another part of me that often alienates me from my fellow yogis is my sarcasm.

I once went to Wanderlust, and every joke I made in my weak attempt to make friends basically made people’s third eye wrinkle, right before they cartwheeled their arms away from me.

There was one moment after a particularly crowded Seane Corn class, and everyone was hurrying to gather their things to make it to the next class—which seemed quasi-absurd to me. I can’t rush to go to yoga!

So I was hanging back as others scrambled to get their hemp Birkenstocks over their toe rings. As this girl was bending over in front of me, I noticed my yoga mat kept bumping her. She turned around to see what was going on, and I said, “Sorry, I didn’t mean to butt fuck you with my mat.”

Needless to say, we didn’t exchange Namaste-s after that.

Oh wait…there is more. I also lack an inner monologue and am relatively unfiltered.

This works to my advantage when I say blissful things like, “I just really connected to her inner child, and felt like our root chakras fire at the same frequency.”

Yet, it doesn’t work as much when I mention that my mom is kind of a —-, or I have cheated on almost every partner I have ever been with. Even though we all aim for non-attachment and open-heartedness, my flexible morals tend to garner some judgment.

Every once in a while, I think it feels good to break the mold and do something totally off-brand. ~Toni Nagy

The yogic philosophy and physical practice have had a profound impact on my life, yet my relationship with yoga has been more solitary than communal. Perhaps it is because I turn people off, but maybe I am also estranging myself.

There is something about excessive sincerity to which I cannot relate. I think the path towards enlightenment means altering your behavior to be the best version of your highest self, but also maintaining brutal honesty about who you actually are in the moment.

I still exist in a quantum mass of contradictions, and am hyperaware of my many follies. Allowing those parts of me to be expressed hasn’t exactly crowned me yoga prom queen.