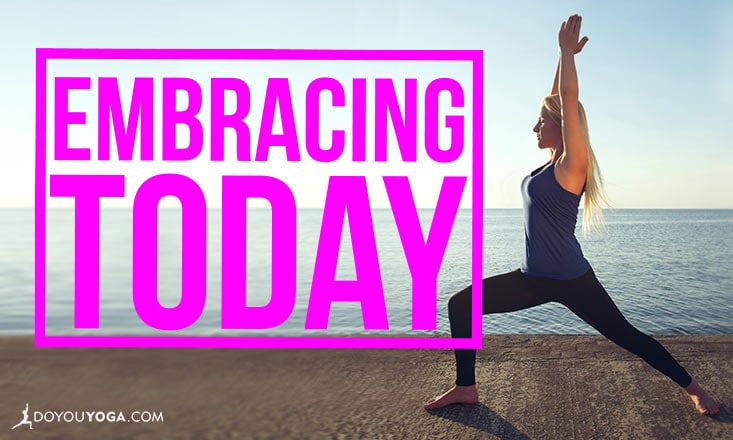 There is no such thing as a “one-size-fits-all” yoga practice. Yoga can be as efficient or exhaustive as you want it to be. There’s even a way of practicing yoga for busy people.

I kept things really simple when I started to do yoga at home. Every morning, I did one set of the Sun Salutation. This took roughly two minutes. Everybody’s got enough time for that!

I’ve been lifting weights for years. In strength training, there is a concept called “progressive overload.” If you did the same workout routine everyday, your body would adapt to the challenge.

At this point, fat loss and muscle growth come to a standstill. To prevent stagnation, it’s necessary to raise the stakes.

There are several ways to accomplish that. You could add five or ten pounds to the bar. You could do one or two more repetitions with the same weight. You could reduce or eliminate your rest periods.

When you gradually raise workout intensity, your body is forced to evolve. In the process, you become a stronger version of yourself.

I continued to follow this set-up until I reached a total of ten sets. That’s not a lot – since then, I’ve done a maximum of 108 in a row – but who cares? The important thing was to establish a yoga habit.

Most people overestimate their ability to commit, because they are so enthusiastic about the possibility of getting fit and healthy. “Sure, I can devote an hour to exercise everyday!”

Those are the famous last words of a person who is about to bite off more than they can chew. Remember: small changes stick better.

If I aimed to practice yoga for an hour everyday right away, I would have failed miserably. That’s too ambitious for a beginner with a busy schedule. Imagine how many potential points of failure there are.

Wake up late? “Not enough time!”

Kids or pets being ridiculous? “I’m too distracted!”

If these situations transpire several times in a row, your self-esteem will suffer. “Oh, well,” you’ll think, “I must not be cut out for this yoga thing.” That’s a false belief.

The problem isn’t a lack of motivation or willpower. Your true limitation? A lack of patience.

These excuses become irrelevant when you start with a bite-sized goal that’s easy to achieve.

Even if you sleep through your alarm – get trapped in a boring meeting – or come home to discover the dog ate your shoes…you can find enough time for one sun salutation. You’ll build confidence and momentum as time passes.

“Wow, everything went wrong today, and I still stuck with my yoga practice!”

Don’t forget: it is necessary to raise the stakes.

If you aren’t crazy about Sun Salutations, start with a 10-minute yoga routine. After you successfully do that everyday for a week, try twenty minutes. On week three, try thirty minutes (I could continue, but you get the idea).

The tortoise beats the hare every time. If you know a friend who needs to see this, feel free to share.