Daddies Do Yoga Too! 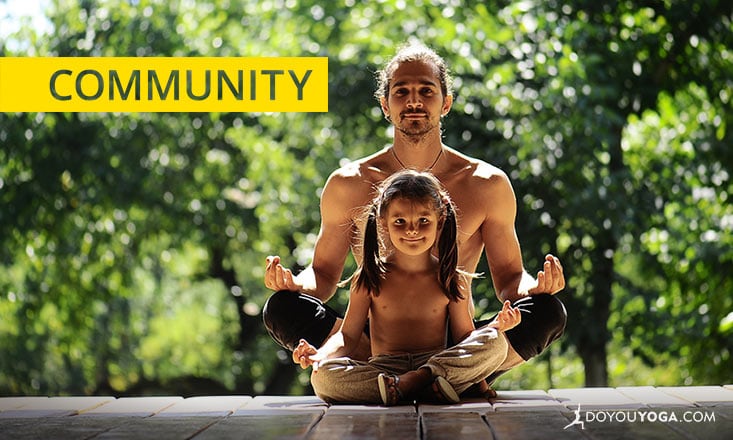 So nearing the age of thirty and having been able to try almost everything in the world, I noticed something was missing. Well, not just one thing, many things: sky diving, swimming with sharks, tight rope walking over a bridge.

Yet those will remain on my “single” list, something of which I no longer am. I’m talking about doing something as a father, a husband, a daddy.

Daddies Do Yoga, Too!

As a daddy, I must try to be the best role model for my two beautiful daughters and strikingly handsome son. Hence the demotion of swimming with sharks and sky diving (not to knock on either of those). So what’s something healthy, calming, and positive that I could do both at home and outside that could influence my family in a positive way without putting my life on the line? Yoga.

I’ve tried every other type of exercise: cross training, body building, calisthenics. It would seem that yoga wasn’t to much of a stretch, right? The thought of bending all types of ways while breathing in a controlled manner seemed easy. I mean I use to spin on my head so this couldn’t be that hard.

My first yoga class put me in my place, literally. I went from a confident, know-it-all father to a clumsy, shaky man who didn’t know where to put his hand or other body parts. Sitting their in the room with mostly single young women I couldn’t help but laugh at myself.

Yoga? I’m sitting here doing… yoga. I went home thinking, maybe I should re-evaluate my manhood. Was there something missing in my life?

The next day I started looking at some yoga websites, but that didn’t necessarily help my wounded ego. Perusing the various media outlets searching all things yoga, I couldn’t help but notice my wife’s ice cold stare striking me from across the room.

“What are you looking at, honey?” My short, innocent reply, “uhmm… yoga.” The yoga class went down fine. The bikini-clad women on the laptop did not. Until I found my first men’s yoga class.

Ragunath’s 30 day Mens Challenge. Thank you Ragunath for literally bringing calm back to my house. After watching Ragunath and finally finding other men who do yoga online, I started to feel a little better about myself.

Ok…. Men do yoga, too, and amusingly, some even do it in tight yoga pants as well. So Im not that strange, right?

Now its been over two weeks and I find myself doing yoga almost every day. My daughters think Downward Dog is the funniest thing ever. It affords them the opportunity to use me as a human slide. Savasana equals human trampoline, and Plank is a horse ride.

After the second week, I realized I’m starting to like this yoga stuff. I’m not folded like a pretzel yet, more like a croissant, but hey, I’m trying.

So next time I’m lying down on the mat with a bunch of 20-somethings who are finding themselves, I will just be finding some good, relaxing silence.