Ask a Yogi: Can Yoga Increase Your Metabolism? 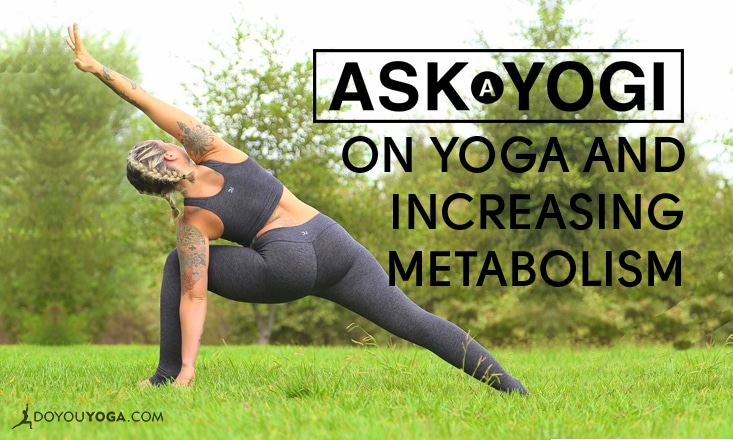 The short answer? Yes. Perhaps more so in the “indirect” ways discussed herein, but yes.

The human body’s cellular process responsible for maintaining basic functions (aka sustaining life) is our ever complex metabolism. Usually thought of as a means to lose weight by manipulation, metabolism exists to build up and break down bodily particles.

Like a well-fueled engine, it’s fuel/food in, and energy out. Our basal metabolic rate, the rate at which we expend energy (burn calories, in this case) while resting, controls 60-80% of our total energy expenditure. Comparatively, just 10-20% of the energy we utilize is based upon intended physical activity such as yoga.

That’s right—resting energy expenditure is responsible for burning a greater proportion of calories over time than physical activity. So how does yoga fare?

Before discussing yoga’s indirect effects on metabolism, the physicality of yoga can directly influence the body’s metabolism as well. Obviously, the body burns calories at an increased rate while engaged in movement activities such as yoga. But it’s hard to measure the extent that metabolism is altered by physical activity since it varies significantly depending on the individual.

So if you’re looking to turn to asana practice to rev up your metabolism, look for strength-centric, high-intensity classes that will use bodyweight resistance–like power Vinyasa yoga.

Indirect Effects of Yoga on Metabolism

Yoga triggers other functional processes that also happen to correlate with metabolic change.

When we experience stress, our system releases an influx of cortisol (a stress hormone). Chronic stress can lead to a buildup of cortisol which is linked to a slowing of our metabolism. The good news is that yoga, especially meditation, has shown to decrease stress and subsequent levels of cortisol by regulating the nervous system.

So even if yoga doesn’t directly increase metabolism in this scenario, the practice can at least bring the metabolic rate back to a healthy normalized state.

The involuntary act of breathing requires a substantial amount of energy–energy that we know to be a byproduct of the metabolic process. Breathing increases oxygen levels, blood circulation, and tones respiratory muscles.

In the wellness world, we’re well familiar with the host of problems resulting from thyroid issues. And not so surprisingly, metabolic issues can also stem from the thyroid. This butterfly-shaped gland in the neck controls metabolism through the production of thyroid hormones.

Yoga has been correlated with increased thyroid activity, which in turn can increase or restore metabolism. Certain neck-centric poses that are practiced to stimulate thyroid hormone secretion include Camel, Cat/Cow, Cobra, and Bridge pose.

Sleep plays a huge role in metabolic rate and insufficient sleep can hinder the body’s natural processes, whether we know it or not. Sleep deprivation is linked to altered metabolic hormone secretion and decreased metabolism, possibly contributing to weight gain and obesity.

However, there have been promising studies show that yoga contributes to higher sleep quality, which subsequently ensures metabolic homeostasis.

If you’re interested in boosting your metabolism, it’s important to ask yourself why. If you’re looking for a way to lose weight, you may have been steered incorrectly by exercise tycoons of the 90’s feeding you “metabolism-boosting” schemes to “burn fat” and “get-slim-quick”.

Body composition and exercise are primary factors in metabolic rate and caloric expenditure, but they’re not the only factors. We don’t have the ability to control most of the other factors, like gender, genetics, and age. So to boost metabolism, use your yoga-acquired mindful skills to create a regular schedule of eating healthy and building lean muscle mass.