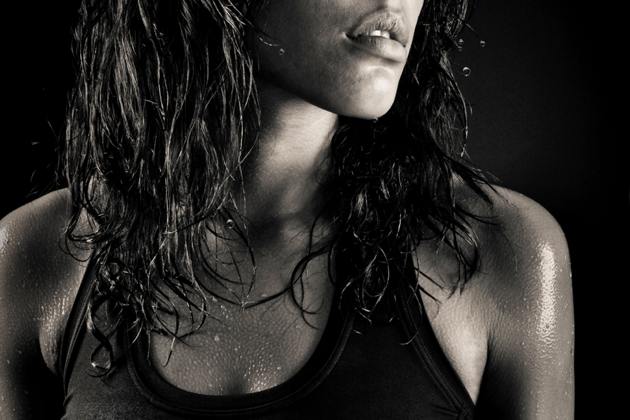 Over the years, I've attempted various physical challenges. More times than I care to admit, I've joined a gym, gotten all enthusiastic, and with the very best intentions, bought a yearly membership.

That membership usually resulted in my actually going to the gym a total of 4 times. My enthusiasm for physical challenges just always fizzled out rather quickly. They always ended up being just a passing phase.

Back in February 2012, I discovered Bikram yoga. I've been meditating with a coach for years, and have been receiving Reiki as a means of healing and therapy. These methods of healing, along with the discovery and exploration of the mind-body connection cured my severe anxiety attacks.

I'd taken yoga classes before, and thought I'd try something new. I wanted to explore something in the realm of mind-body connectedness, since that's the only thing that has ever truly helped to change anything important in my life.

So I took a Bikram Yoga class.

Well, something changed (actually a lot of things changed). 90 minutes in a 105-degree room, and all the while you have to meditate on your own body in the mirror, to strengthen your form and hold the postures. The mental focus involved is like nothing else I've ever encountered.

I felt more centered, naturally calmer, and it became easier to keep perspective about life in general. I felt… Happier. It became less of a chore to dull the noise of those unimportant things that can weigh on my mind- an affliction that I'm sure many of you can attest to.

So, I decided to embark on a 30-day Bikram yoga challenge in July 2012—30 consecutive days of Bikram yoga.

I love the practice, so it sounds easy enough right? What's the big deal—some people are athletic, run marathons, play competitive sports on regular basis, etc. So what's the big deal about doing hot yoga for 30 straight days? Well, I was never "that person."

In 2011 I was smoking nearly a pack of cigarettes each day. Not ‘til I discovered Bikram have I ever truly attempted much more than the occasional run on the treadmill. Committing to 30 straight days of anything physical is never something I would have ever thought I'd have the desire or motivation to do.

With the support of my family, however, I did it. I completed the challenge.

If you can actually see this post, it means I want to share my discoveries through this experience with you. This is something I hold close to my heart, and many people have inspired me to accomplish this without even knowing it. I hope, on some level, this inspires you.

A 30-day challenge can be anything you want it to be: 30 days of having a positive attitude, 30 days of trying to be the calmest person in the room when life gets dramatic, 30 days of being a little nicer to that colleague that really gets under your skin…

30 days is A LOT longer than it sounds. The physical and mental commitment were much more challenging than I'd imagined. If I can do it, anyone can!

Here are 9 things that I've uncovered about myself during my 30-day Bikram yoga challenge:

On day 5 of my challenge, I couldn't believe how oppressive the heat felt. After so many months of practice, I was so completely aware of the temperature that day.

How could this be? The day before, I had a great class! I had to keep my mind from taking over, fight to stay focused on my body and release my mind. I actually thought of walking out, saying I had to use the ladies room just to get some cool air. I felt annoyed, even angry. My mind was totally taking over.

Still, I made it through. When class was over, as I was driving home, I remember laughing to myself as I turned down the A.C in my car because it was too chilly. This practice has really helped me experience the beauty of changing conditions.

Rather than be so afraid of experiencing negative emotions or conditions, it's important to remember that they will pass. I need not be so afraid of my feelings. They will eventually pass.

I never have anything "all figured out." On day 6, I did a pretty solid toe stand—hands in prayer, lifted up off my heel a bit, eye gaze in the mirror… Day 7—I fell flat on my butt!

Every day is different and filled with new challenges. What I think I may "know" today, may fail me tomorrow. I must keep learning, keep trying, keep falling on my butt—and remember what that feels like.

Taming those self -defeating, negative thoughts is the hardest part. My mind is so slick, and knows exactly what thoughts are victorious in taking over. One of my instructors once told the class, "Your mind is like a bad neighborhood. Don't go there."

So when I'm counting in my mind how many postures are left, thinking of the heat— I re focus my attention on my breath, keep the space that I'm holding, and let that clever, tricky mind of mine… Go.

I am learning how to unlearn these tricky habits that my mind is so skillful at using to take over me. I CAN, with constant effort, make this mental determination to let go of my destructive thoughts a daily practice, even if the yoga isn’t. I did for 30 straight days.

4. Look to your helpers.

I have felt so blessed in these 30 days. My support system is a true gift and my greatest blessing. My mother took care of my children for over two hours every day and didn't complain once. She's never taken a yoga class in her life, has no frame of reference, but knew it was important to me.

My mother, however, has many yogi qualities—she's a pillar of strength for me and always has been. She's the most unselfish person I've ever known.

My husband, as always, is the Empire State Building in my crazy city. One day, I was tired. My body was tired and I just… Didn't want to go to yoga. "Babe, I almost don't want to go today," I complained to him. He looked at me and gently said, "You made this commitment to yourself."

He didn't give me the "out" I was looking for. He changed his work shifts around to meet my yoga schedule, even if it completely inconvenienced him and didn't once even give the roll of an eye.

Even my sister-in-law, Mary (my mother in another life, I'm convinced) watched the kids for me so I could make a class. I have people in my life that I can count on—really count on. My support system is amazing. This challenge has made me beyond grateful to the helpers in life.

5. Confidence can mean more than numbers on a scale.

Since starting Bikram yoga in February 2012, I no longer weigh myself. I just don't care about the numbers. For the first time in my life, I can say, "I haven't weighed myself in six months."

6. Stab your fear in the face (in the words of a fearless woman that I love: Lady Gaga).

As you know, I broke my back when I was 18. The recovery was long and pretty awful. A lot of the back bending postures in yoga had much fear attached to them, for me. I was very protective of my back. For the first few months, I didn't do them.

Little by little, class by class, I let go of the fear. I let go of the idea that I had to protect myself so much. I went a little further each time, and now I do all 26 postures in the series. Why should the past define me and set lifetime limitations?

Doctors have told me lots of things: "We don't know if you'll walk again, we don't know if you can carry a pregnancy, exercise may be difficult, you may suffer from early onset arthritis…" I have spent my life proving doctors wrong. Why not now?

Doctors are amazing, and are the reason that I stand on two legs and go to yoga every day—but they don't know everything. I've released a lot of fear in the past 30 days.

I would find myself getting frustrated when I would fall out of a posture. I'd be hard on myself. When a toddler learns to walk and they fall down, they don't get frustrated. They just pick themselves up, unaffected, and wobble away. They even laugh sometimes.

Why do we, as adults, take ourselves so seriously? One day, I tipped right over at yoga. I just tipped forward and fell. I caught myself. I giggled and moved on. My instructor said, "That's the spirit! Smile, it's only yoga!"

That stayed with me. Falling is what you make of it.

Physical activity was never a mindful endeavor for me. I would get ready to run, put my mp3 player on full blast, and get lost in the music so I wouldn't have to think about what I was doing.

While there's nothing wrong with that, I realize that there's no escape from myself on the mat. On my yoga mat—staring in the mirror, being mindful of my breathing through each posture, paying attention to my form, where giving up is not an option—that is where transformation happens.

The instructors always say, "If you don't feel anything, that means nothing is happening." I have found that to be so true, on many levels.

Yoga has helped me become an active participant in attaining my own happiness and truth, more than any pill ever could. At the end of each yoga class, the instructor thanks us for allowing him or her to guide us and says, "Namaste."

In that room, we're all trying to be better. We are all gathering to open our hearts, to be kind to ourselves and our bodies, to become more centered, and as a result we can be a better husband, wife, parent, friend, etc.

We're all trying to be happier. We all fall out. We all get back in. We all reach milestones. We all learn. We never stop trying. We are all the same.