8 Most Yoga-Obsessed States in the US 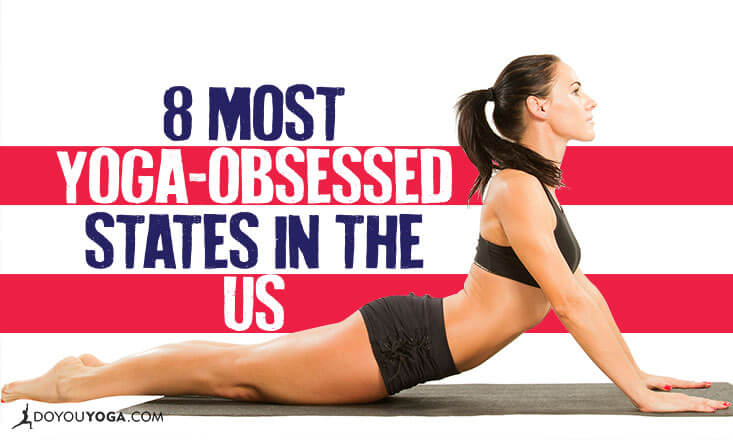 With yoga’s global boom in popularity, it comes as no great surprise that this ancient practice is spreading far and wide even across the good old US of A. Some states are so infatuated with the practice, that there has been a great explosion of yoga studios being built and yoga teachers being trained in specific locales.

Online traffic in these states has also been significantly increasing toward yoga-related websites and blogs. The following is a list of the eight most yoga-obsessed states in the US…is one of these your home?

This state bordering our healthy neighbor to the north (Canada), and the vast Atlantic to the east, is no stranger to yoga obsessions. Maine loves yoga so much that it’s starting off this list ranking in at number eight.

Philadelphia is the major city that draws Pennsylvania to this list. Residents of this health-oriented city are 42% more likely to practice yoga than the general population of the US. And with hundreds and hundreds of amazing yoga studios to choose from in the city, it is no hard task to meditate and sweat in the City of Brotherly Love.

San Francisco was the first airport to have a yoga room in its waiting terminals. Big surprise here, considering the health conscious state of California absolutely loves yoga.

With a booming yoga scene in San Diego, LA, Santa Barbara, San Francisco and everywhere in between, California is the sixth most yoga obsessed state.

Colorado is a hotbed for yoga. With Denver being the US city most interested in yoga, it is not a big wonder that Denver also consistently ranks as the healthiest city in the United States.

Yoga and health go hand-in-hand and Colorado is embracing this ancient practice to bring even more health and happiness to this beautiful state.

Seattle is a major home for yoga lovers. Residents of this rainy but lovely city are 46% more likely to practice yoga than the general population. Thanks to Seattle being home to one of the five Yoga to the People locations in the US, yoga is affordable and accessible to all making Washington a super-obsessed yoga state.

New York is a breeding ground for yoga lovers, with residents of The Big Apple being 34% more likely to practice yoga than the general population. It's no surprise considering all the incredible yoga studios and events that exist throughout the city (not to mention all the stress that needs to be released!).

But NYC is not the only one stealing the show; yoga is spreading far and wide throughout the state as it is the third most yoga obsessed state in the US.

This arctic vast land outside of the contiguous US really loves yoga. In the cold winter months, they are likely practicing lots of sweaty, hot (or at least inner-heat building) yoga!

This state is the second most likely to view articles about yoga online. Alaska is warmed by the practice so much that it has made its way across all of the most populated regions of the state with the more isolated yogis practicing right out of their homes.

Ranking in at number one, the free-loving, hippie stomping grounds of Vermont takes the cake. This yoga-loving land is known around the states for its liberal policies and happy green living, so naturally — they love yoga.

Boasting one of the highest yoga studios per capita rankings in the US and some of the most yoga-obsessed online readers, Vermont is, without a doubt, the most yoga-loving state in the country.

Where do YOU practice yoga? What's the yoga community like in your place?