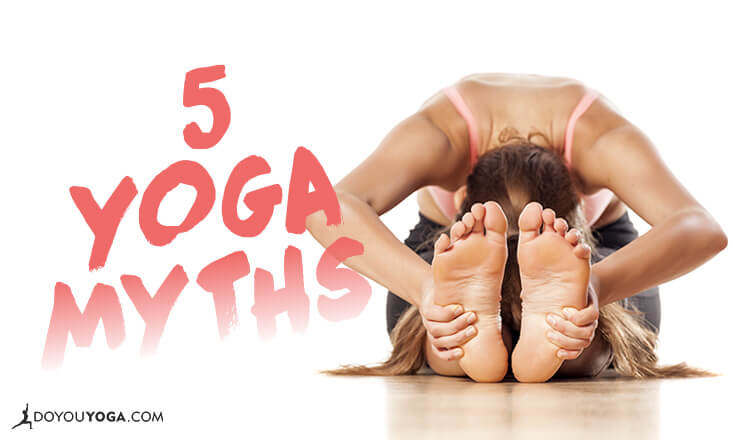 Yoga is for everyone, but a lot of people still get discouraged from trying it out and exploring its many benefits because of some common misconceptions.

Here we give a lowdown on some of those common myths about yoga and showing why yoga can bring benefits to anyone!

Myth #1: You have to be flexible to do yoga.

Practicing yoga helps you increase flexibility, so if you’re not flexible, yoga is actually a great way to start improving!

Yoga uses a combination of strength, flexibility, and balance, so even if you find you’re not winning in the area of flexibility, you can focus more on the strength and balance aspects until you’ve improved your flexibility.

Flexibility is important to overall health and decreases risk of injury, so don’t ignore it!

Yoga is for people of all ages, young and old. There are many yogis that continue to practice yoga well into their 70s and even beyond.

If you are concerned about being unable to do some of the movements, look for a gentle yoga class or let the teacher know about your situation beforehand so that they can offer modifications.

Yoga provides the same health benefits whether you are male or female, and despite yoga classes usually having more women than men, yoga is becoming increasingly popular among men.

Also, don’t forget that yoga was started by men thousands of years ago and was even practiced exclusively by men for a long time.

Many yoga studios offer special rates for new members, so even those on tight budgets shouldn’t have a problem at least being able to try out a class and get started with yoga.

In addition, today there are all kinds of online classes and videos that you can try and follow for free. All you need is a mat to get started.

The "sister myth" of this one is: "I don’t have time for yoga – it’s too much of a time commitment."

There is a vast variety of yoga routines – you don’t have to commit to a 60 or 90-minute class to reap the benefits. Research has shown that even just 20 minutes of yoga can increase brain function by improving focus, speeding up information processing, and improving memory.

While it’s true that some yoga studios incorporate the religious aspect of yoga into sessions, this is not very common (at least not in the US).

Most Americans are interested in yoga for the physical and mental health benefits, not for a religious experience. In fact, 80% of American yogis say that they practice in order to increase flexibility. Other motivations include reducing stress and improving fitness, but spiritual enlightenment isn’t a main goal for most.

Do you have any other yoga myths you want to set the record straight on? Share your thoughts in the comments!