3-Step Mindfulness to Reset the “Should” Mindset 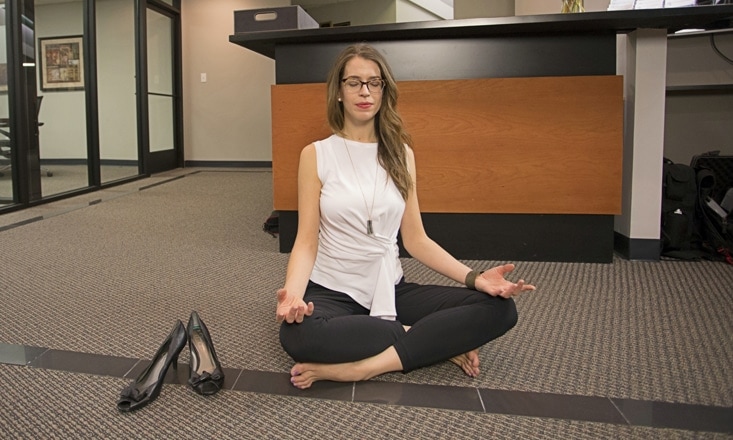 We exhaust ourselves, running in circles in our own heads with these mental conversations that involve "shoulds." I should have said this, I should have done that, I should really be better at xyz, and so on. Who are we even talking to?!

When I was going through grad school for yoga therapy, I called my mentor for a complaint session filled with shoulds. She listened and then stoically responded: “Ann, you are should-ing all over yourself.” This made me think—are we mindful of moments when we drop into a “should” mindset?

The "Should" Mindset in Our Life Experiences

A few Sundays ago, I woke up to a 6am voicemail from my 92 and 1/2 year old grandfather, whom I call Pop. He said that my grandmother had a massive stroke and asked for me to fly from Colorado to rural Virginia to be with him at the hospital. I immediately packed my bag and headed to the airport. However, the should mindset took over.

"I should have visited earlier instead of putting it off" and "I should have called my grandmother on Mother’s Day last weekend. I shouldn’t have gotten caught up in my work."

When I arrived, everyone was gathered around her hospital bed. We spent days in that hospital together—crying, laughing, and singing to her as she passed. She wouldn’t have wanted it any other way. In fact, it seemed she knew it was her time.

She had a diagnosis of dementia, and the weeks before her stroke, she was putting her house in order. She obsessively made piles to give away her dresses and jewelry to specific granddaughters. She told her daughter which hymns she wanted to be sung at her funeral. She cleaned my grandfather’s office—which mainly involved indiscriminately throwing away boxes of his papers, many of which later had to be retrieved. It was all good intentioned, even though there were moments of incoherence.

One evening, in a moment of absolute mental clarity, she called my Pop to “talk” at the kitchen table. She uncharacteristically shared with him all that was on her mind from the many years together—the promises unkept, the struggles, the heartache. He listened, he apologized, and they shared a sweet kiss. Then, she went on a walk with her daughter to clear her mind. On that walk, she had her stroke.

I will never forget the moment when Pop broke down. "It should have been me," he said with tears in his eyes while looking at her in the hospital bed. Through those days in the hospital, Pop shared with me many genuine shoulds, including "I should have prioritized more quality time with her and the family…I should have called you all more…It shouldn't have taken this to get us all together."

I spent 10 unexpected days with family as she died naturally, just as she wanted. I got closer to extended family that I hardly see. During that time, I put my work aside, connected with family, and watched the patterns of my mind.

Breaking the Cycle of "Should" Mentality

Since my grandma died, I have been working to break the should cycle with mindfulness in action. But before we move on to my process, notice your posture right now as you're reading this. Did you immediately adjust and sit taller and become more mindful?

Now, for just a few moments, close your eyes, notice your breath, and inquire: What have been your recent shoulds? Go ahead and try this, it'll only take less than a minute.

Now, keep those shoulds in mind as I explain my 3 mindfulness-based steps to reset the “should” mindset (you have already jumped into step #1).

As with any mindfulness technique, the key is simply observing. I am practicing catching my mental chatter in the act of should-ing. This is the simplest step, but it is not easy. Noticing my patterns, often prevents my mind from going too deep into a should hole.

We are often told to follow our heart, but I don’t think we are often enough told to question our minds. Our brains can be so set in patterns from conditioning, running electrical and chemical pathways that are not grounded in reality. Our neurons and neurotransmitters prefer the path of least resistance. Our routines are easier than questioning. So, I have become a skeptic should-er, asking “is this true?” and “does this really matter?”

I now imagine myself at 92 and a 1/2 years old, looking back. Would I mention this to my grandchild under the bright lights of a hospital room? End of life research reveals that people say shoulds that have to do with deeper values, like “I shouldn’t have worked as hard” or “I should have had the courage to follow my dreams instead of everybody else’s expectations.”

When considering your recent shoulding habits, is there truth and meaning? If not, can you let it go? If so, can you make a change?

For those few meaningful shoulds in life, I ask myself if I can actually do something about it. For me, living a mindful life involves taking action—making conscious choices toward a life of more meaning. As modern yogis, we aren’t meditating on a mountain top to reach enlightenment. We are living in the real world with bills to pay and children to raise.

We must adapt the ancient practices of yoga and mindfulness meditation to be practical, which sometimes means doing and not just being.

I once heard “shoulds are coulds with shame.” I have been asking myself: could I do something different in the future to live a more fulfilled life? I realized that I could visit my Pop more. I could prioritize family and loved ones over work. So, here I am, sitting on Pop’s back porch in the mountains of Virginia once again, journaling with Pop. I think he is realizing that it's not too late for him to shift some of his shoulds to action too.

This past weekend, I presented a PowerPoint to him on how to use Siri on his new iPhone. Pop has mastered “Hey Siri, FaceTime Ann.” (Well, sometimes he says “Hey, Series” which is apparently not close enough to function, but we are getting there.) Next month, I will be going for another visit.

I am trying not to live in regret but, instead, to live in refinement. I am committing to notice more often when I’m should-ing all over myself, to be skeptical of my mind’s habits, and to make mindful changes for the shoulds that bring my life the most meaning. What about you?