2 Tricks For Making Great Smoothies (and a RECIPE) 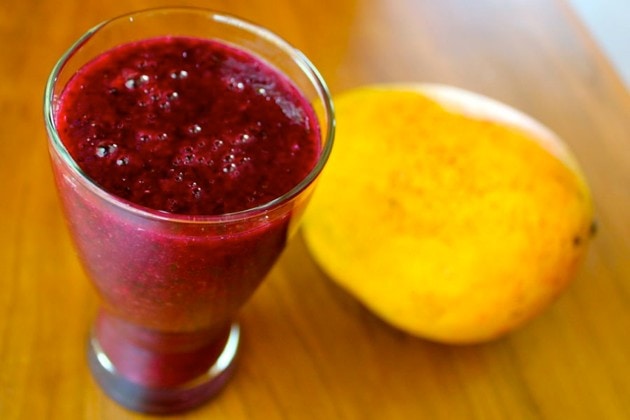 I go through smoothie phases; sometimes I’ll drink almost one a day, and other times I’ll go months without having one. I’ve seen many a smoothie recipe that calls for using those lovely VitaMix blenders so you can be the envy of the neighborhood when you pulverize your bananas and spinach to a pulp. If you don’t have one, you’re in luck today. I am going to tell you some awesome little smoothie-making tricks AND give you a new recipe to try! Get your notebooks ready…this one is a keeper.

Tip #1: Use An Immersion Blender

I am big proponent of using what you have. I already own a blender – albeit a crappy one – so I don’t need one of those fabled VitaMix’s. My blender gets the job done…most of the time. That being said, it’s kind of a pain to clean up.

I got a tip from one of my friends about using an immersion blender to make smoothies with, and it’s absolutely brilliant. An immersion blender is basically a blending blade on a long stem, and it’s made to blend soups and things that are difficult to put into a blender. It’s about 1/20th the cost of a VitaMix, too!

This one is easy to solve, I call them smoothie ice cubes. I’ll speak in terms of spinach and kale, but you can use just about any ingredient that you won’t use fast enough for smoothies. Here’s the trick: blend up your greens with a bit of water, then put them in ice cube trays and freeze them. When they’re frozen solid, put them all into a ziplock bag and keep them in the freezer indefinitely (I like to think the freezer freezes time).

Then, when you’re ready to make a smoothie, pop a couple of the smoothie ice cubes into the blender with the other ingredients you want to use, blend them up and enjoy. It’s pretty much foolproof.

Smoothies have been my go-to breakfast lately because they’re quick and easy, and I’ve been enjoying hitting that snooze button. This is a new favorite green smoothie recipe, which means it’s healthy AND delicious.

Split the ingredients between two cups and blend with an immersion blender. Drink up! This recipe is vegan, but if you don’t dig almond milk, you can substitute regular milk for the almond milk.

With these tricks, I’ve been able to make my smoothie making much easier, more enjoyable and less wasteful. Immersion blenders and ice cubes are the wave of the smoothie future!