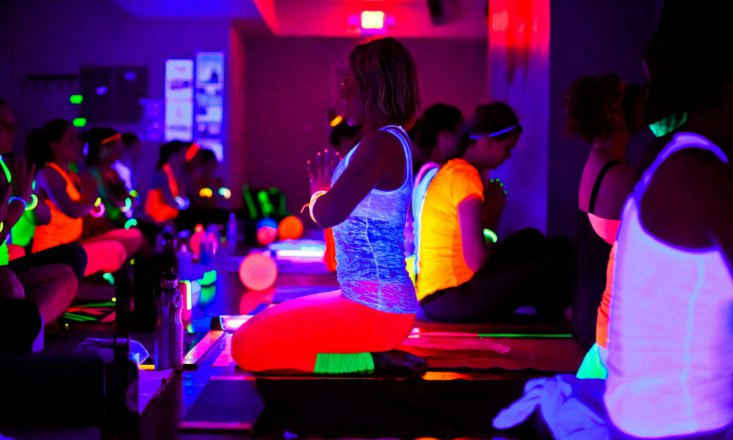 Yoga and raves. The two seem like polar opposites, but are they really? According to many, they can actually be pretty similar.

Yoga Raves have been taking the world by storm since their inception in Argentina a few years ago. Yoga Raves started as a way to keep young adults in Argentina from turning to drugs and alcohol. Bring in the yoga! However, these parties started attracting more and more people, and since then, have spread the world over.

But What is a Yoga Rave?

Yoga Raves are just that. Yoga followed by a rave. Except you won't find crazy experimental drugs or excessive amounts of alcohol at these raves. These raves are much more in line with yogic philosophy.

The evening usually starts around seven or seven-thirty at night with a yoga class. Generally the kind of yoga involved is something high-powered and energetic, like a Vinyasa or a Power yoga class. After that, participants sing and dance to Bhajans, or devotionals, with some electronic music thrown in as well.

Instead of drugs and alcohol, Yoga Raves generally have a gourmet vegetarian food bar, and healthy, alcohol-free drinks. There are definitely shots there, but they're more of the wheat grass variety than the vodka variety.

The evening winds down with a huge, group Savasana to balance out all the dancing and excitement from the previous hours. Yoga Raves are generally over around ten or ten-thirty at night, so you can go home and get a good night's sleep. And when you go to work in the morning, you can tell all your coworkers about the crazy party you went to last night… hangover-less.

Since beginning in Argentina, Yoga Raves have spread the world over. They can now be found in cities as diverse as Boston, New York, London, Berlin, and Stockholm. Plus, they're growing. The founders of Yoga Rave have plans to bring this awesome, yogic party to Lithuania, Slovenia, Russia, South Africa, and Denmark.

Depending on where you live, other, similar parties may have started popping up as well. Ecstatic dance parties, clubs with a more yogic influence, yogic trance dance parties, or even just yoga classes to deep trance or house music.

Check out the Yoga Rave website, and see if they're coming to a city near you.

All of these parties and Yoga Raves are new, exciting ways of brining the yoga community together. In combining two interests, like yoga and going to clubs, but by putting a distinctly health-conscious and yogic spin on it, brings people together who may have never met otherwise. And I don't know about you, but I know what I'm doing with my Saturday night, now!

Have you been to a Yoga Rave? Share your experience with us below!