Living Yoga On And Off The Mat 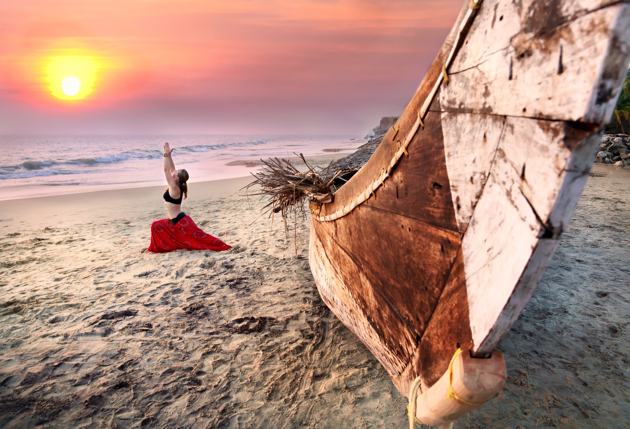 I feel like there’s been a lot of talk lately – on blogs, on twitter and around the studios where I teach – about what makes an advanced yoga practice. Is it being able to do more challenging poses, a physical practice heavier on inversions, arm balances, and deep backbends? Or is there more to it than that? With the heavy focus on the asana – especially here in Sydney, where power yoga seems to reign supreme, it can be easy to forget that there's much more to yoga than the physical practice. In light of these conversations, and while I’m healing from an injury and haven’t had as much time on the mat as I’d like, I’ve been thinking a lot more about the other aspects of yoga. Also, let’s be real: the less time I spend on the mat, the more all over the place my mind is. And, quite frankly, that needed to change.

Discovering Yoga On And Off The Mat

I did what any self-respecting yogi would do in this situation: I pulled out my well-loved copy of Patanjali’s Yoga Sutras and opened to the section on practice. I figured that if I wanted to go deeper, this would be the chapter that would guide me. In this portion, Patanjali outlines the eight limbs of yoga; in other words, these are the steps that you need to take to attain wisdom. Spoiler alert: In Sutra II.29, where Patanjali lists the eight limbs, asana is number three. Three! Now, I’m not saying that there’s anything wrong with the fact that the physical practice is how many of us approach the world of yoga, but it’s interesting to see where our focus lies. In seeking to go deeper – or just to find a way to find my focus again – I decided to begin at the beginning, with the yama and the niyama.

Yama and Niyama – The Ten Commandments of Yoga

The yama and niyama, translated as abstinence and observance, are the first two limbs of yoga according to Patanjali; these guys are the core of a strong yoga practice, and a serious part of living yoga on and off the mat. As a recovering Catholic, I feel like I work with the yama (non-violence, truthfulness, non-stealing, continence, non-greed) fairly regularly, since they tie in neatly with the Ten Commandments that I had drilled into my brain from birth. Though I at least keep the abstinence in mind in my daily life – the niyama…well, they can to suffer a little bit. Purity/cleanliness, contentment, accepting but not causing pain, spiritual study, and worship of God/self-surrender? Nope, not really.

It seemed like a good idea to begin focusing on them more, in hopes that they'd settle my mind down a bit. If I’m being honest, I find the niyamas a bit overwhelming, so I decided that taking action would mean working with the first one: saucha, or purity.

For better or for worse, the Sutras are just that: threads, brief tidbits of wisdom left open to interpretation. In the one on saucha, Patanjali talks primarily about purity of the body, noting that one will begin to lose interest in contact with other bodies as well. I prefer the interpretation in Kimberlee Jensen Stedl’s Punk Rock Yoga Manifesto, which examines the external meaning of it, too. As I took a look around my tiny room in my shared flat, it confirmed that this was definitely where I needed to work. Even when it's clean, the room feels crowded, and since I work from home, I had a feeling that was contributing to my inability to concentrate.

So I began. I started with my desk, as I knew the things there would have places to go, like the trash can. Once that was cleared, I moved on to the next spot. I blasted one of my yoga playlists, tossed unnecessary paperwork, folded laundry, found homes for random items that had been piled on my couch. Slowly but surely, as the garbage bag filled up, my furniture began to re-emerge. I was surprised and delighted to see that everything had a home; I'd been so lax about keeping up with this basic chore that I didn't expect it all would.

Despite the immediate changes, I didn't notice the difference until I woke up the next morning, looked around, and felt an incredible sense of relief. For the first time since I moved there in April, my room feels like a sanctuary, a place to be away from tension and overwhelm.

It reminded me how important the first limbs are, too. It all works together. I spend so much time training my body, working to improve my balance on my hands and feet – why don't I put as much time into training my mind, or into creating the space that will help facilitate both of those things? I may not have a definitive answer about what makes an advanced yoga practice – and I suspect it varies from person to person – however, I know that it’s important for me to continuing exploring the first two limbs as I deepen my asana practice.

Is there a yama or niyama that you can work on this week?