What Does Yoga Have To Do With The Moon? 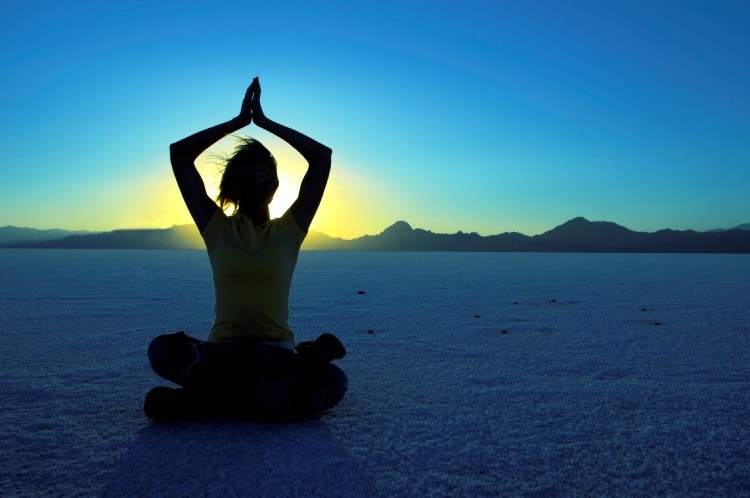 What is the relationship between yoga and the moon? You may have heard that you are not supposed to do yoga when the moon is full. Or that the yogis fast from eating on a new moon.

And why do they do 108 postures with the solstice? Here, your questions are answered; what does yoga have to do with the moon, anyway? And if you’re wanting to delve a little deeper into your yoga practice, make sure you check out this free 30 Day Yoga Challenge.

“Hatha yoga” is what is generally meant when people refer to yoga in the form of exercise. The word ‘hatha’ means willful, or forceful. Translated from Sanskrit, ha means “sun” and tha means “moon.”

This refers to the balance of the masculine and feminine aspects within each of us. The masculine part of us is the sun—hot and active. The feminine is the moon—cool and receptive. Hatha yoga asanas (traditional yoga exercise) is meant to create balance within the body, and unite the opposites. With the practice of yoga, we develop a balance of strength and flexibility, effort and surrender with each posture.

Hatha yoga is a powerful practice. It is a tool for self-transformation and calming the mind. Within the practice of hatha yoga, we help to still the fluctuations of the mind in order to be more in tune with the present moment.

You’ve probably heard of people doing 108 sun salutations around the time of the new year. But what is the meaning of this? Why 108?

The number 108 has much significance in yoga, Buddhism, and Hinduism. Vedic astrologers determined that the average distance between the sun, moon, and Earth is 108 times their respective diameters. It is therefore viewed as a number of wholeness and existence. The traditional mala has 108 beads, plus one guru bead around which the other 108 beads turn like the planets around the sun.

The numbers 1, 0, and 8 represent one thing, nothing, and everything (infinity), representing the belief of the ultimate reality of the universe as being simultaneously one, empty, and infinite.

In tradition of this sacred number, 108 sun salutations in yoga practice is used to honor the change of season, especially during the spring and fall equinox. On the equinox, night and day are nearly the exact same length all over the world. Equinox means “equal night” in Latin. Yogis celebrate this change of the seasons as a new beginning, practicing 108 sun salutations to honor this sacred universal change.

Ekadasi, meaning “eleven,” is the eleventh day after the full moon (shukla or bright) and new moon (krisha or dark) of every lunar month in the Hindu calendar. It is considered to be a special day with spiritual significance. According to the Vedic scriptures, one who observes fasting on Ekadasi is freed from all kinds of reactions to sinful activities, and is able to advance in spiritual life.

The point is to put all of the focus you would normally put into preparing and enjoying food into concentration on your faith and love for the Divine. In this way, you become closer to liberation.

Fasting is recommended in western medicine and Ayurveda for maintaining and improving health. A water or juice detox cleanses the body of impurities, stimulates the digestive system to rid itself of stagnant waste, and allows better mental focus because the neurologic system is not stimulated by ingested food and substances. In this way, the physical purification associated with fasting is tied to the auspiciousness of this day.

The Full And New Moon

The sun and moon exert a gravitational pull on the Earth. Their relative positions create different energetic experiences that can be compared to the breath cycle.

The full moon energy corresponds to the end of inhalation when the force of prana is greatest. Take a deep breath in, hold it, and feel the prana (energy) in your body. This is an expansive, upward moving force that makes us feel energetic and emotional, but not well grounded. During the full moon we tend to be more headstrong.

The new moon energy corresponds to the end of exhalation when the force of apana is greatest. Take a moment to exhale completely, feeling your energy drain with the breath. Apana is a contracting, downward moving force that makes us feel calm and grounded, but dense and disinclined towards physical exertion.

Yoga and the Moon Cycles

The Ashtanga yoga tradition recommends honoring this natural moon cycle by abstaining from practice on the days of the full and new moon.

As we become in tune with our natural cycles in the universe, we honor the rhythms of nature to live in greater harmony with it.~April Saunders

When the moon waxes or wanes, the mind is influenced. We may not be able to see this influence in the Earth because it is solid, but it can be seen in the ocean which is liquid.

When our walk through life is done with conscious awareness, we are said to practice Yoga.