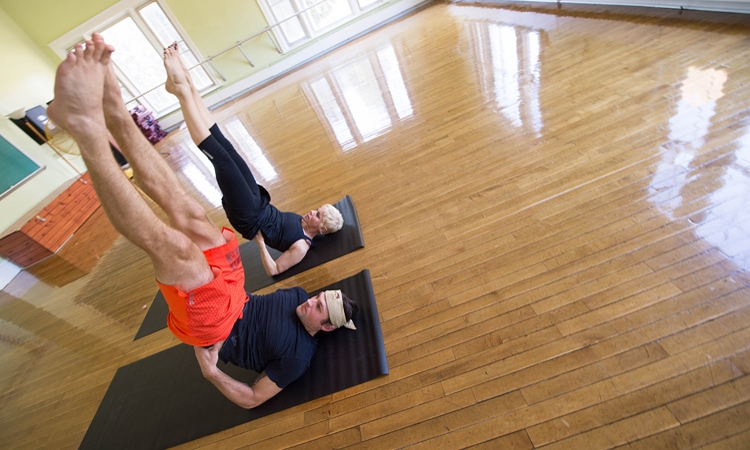 He thought he was coping with it fairly well, but after participating in a nine-week yoga study at MSU, Stark says his recovery was taken “to another level,” according to MSU Today.

The experiment was carried out in the hopes of determining whether yoga can benefit veterans with PTSD; it involved two-hour yoga and meditation sessions with instructor Kintla Ernst of East Lansing’s Kintla Yoga.

Once a week, Stark’s brain activity was measured while he wore an electrode cap and performed computer-based tasks like solving math problems while remembering a sequence of random letters.

By the end of the nine weeks, his score on this task had jumped from 22 to 50, indicating a high level of ability to handle multiple things at once. His scores also improved on a task that measured distractibility.

“Logan’s brain efficiency jumped through the roof after two months of yoga,” Jason Moser, assistant professor of psychology, told MSU Today. “His memory improved, he was much less distracted, and he was able to bounce back from mistakes with ease.”

In addition, Stark’s reactions to mistakes and loud noises improved—along with, as might be expected, his flexibility, endurance, focus, and patience.

The study began when Ernst reached out to Moser, saying she was interested in facilitating a study on “the healing powers of yoga” in people with PTSD. Ernst, who specializes in working with trauma survivors, according to MSU Today, says yoga can help survivors “reconnect to the here and now.”

Her sessions are more involved than regular yoga sessions; although they include traditional poses, Ernst takes a more active role in sharing the experience with the student and offers them choices.

“If you’re more aware of what’s going on around you, when a trigger comes up you can breathe deeply, come into the present and more skillfully handle what arises,” Ernst tells MSU Today.

“It’s about learning to be present in a safe space and discovering the magic of reconnecting body, mind and breath.”

Currently, says the National Institute of Mental Health, the main treatment for the condition is talk therapy, medication, or both; perhaps someday, yoga may also be a common method of treatment.