Why Yoga Is The Perfect Practice For Men 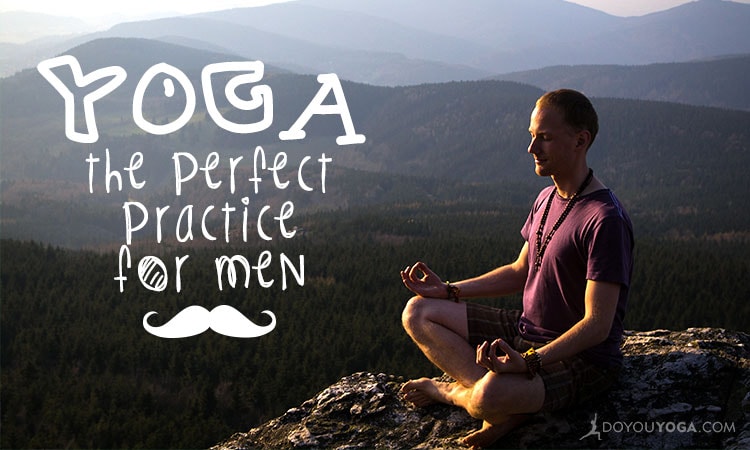 Growing up on the outskirts of Detroit, a straightforward, blue-collar environment where hard work, family, football, and cars reign supreme, yoga was about as common as a meal served without meat, a Honda (or any Japanese-made auto) driving up I-75, or the Lions actually winning a playoff game.

In other words, it was unheard of. In fact, I don’t even think the word “yoga” touched my ears until sometime in my mid-twenties, when I was living in northern California.

Now, the credit for yoga anonymity can’t be entirely attributed to the location, it is in part, a function of the era.

Yoga is clearly more popular now than it was in the 1980s and 1990s, and Detroit is now home to many burgeoning studios. Yet, in my hometown and in towns everywhere, for most men, yoga is something that our wives do while we’re out playing 18 or mowing the lawn.

It’s not the man’s fault that he’d rather play golf or drink a few beers while watching the game, than unroll the mat or sit in silent meditation. It’s just that… we literally don’t know how to do what yoga demands of us. The same goes for other forms of spiritual practice.

A Profound Disconnect from Self

Over generations, men have participated in a slow narrowing of self-definition. By becoming actors cast into the role of “manly, unemotional, rational, and competitive provider,” we have distanced ourselves from the alternate qualities—communicative, emotional, receptive, and intuitive.

These latter qualities, the same ones that complete our definition as a human being, have in turn become characterized as “feminine.”

Through this narrowing of “the self,” we men have learned to suppress (or redirect) emotions, sacrifice innate passions for the role of “making money,” and in the name of survival—accentuate our rational mind while eroding our intuitive sensibilities.

We have become the men that society has asked to become, and in the process have created an internal rift resulting in self-confusion.

We have become frustrated, aggressive for aggressiveness’ sake, logical to a fault, and conditioned to a particular set of behaviors that have become the accepted practices of men—watching sports, fixing the house, playing golf, drinking beer, and the like. We do what we do because that’s who we think we are.

How Yoga Can Help

Allow me to explain why I believe yoga is the perfect practice for men. Yoga will show us that who we think we are is only a fraction of who we actually are. Yoga can give us men the foundation to change the pattern—to explore previously uncharted territories within us.

Yoga engages the self-inquiry process and makes transformation possible, all the while integrating the already-in-use masculine traits with those that have remained hidden from view.

In essence, Yoga will complete us—or rather—show us that we’re already complete.

It will be incredibly uncomfortable at times—we are, after all, engaging a conversation with the physical, emotional, and mental body that will quickly make us aware of our negligent ways—yet it is a journey of recovery that demands our attention.

Why Do We Men Need to Change?

It feels about time for us to redefine what it means to be a “real man.” We’ve long approached life from an angle that is a gross misrepresentation of masculinity. Our aggressive, rational, competitive view towards life has damaged not only our sense of self, but also our relationship with life itself.

Being self-aware, whole, and in touch with “the bigger picture” promises to not only deliver us men to greater states of potential within our lives, it also allows us to become empowered agents of change for the world-at-large.

Becoming a “real man” is an act that can literally change the world, and if welcoming the practice, study, and application of yoga into our manly lives is what it takes to do so, then I think it’s time we men did some yoga.