Why Every Yoga Teacher Is Also A Student 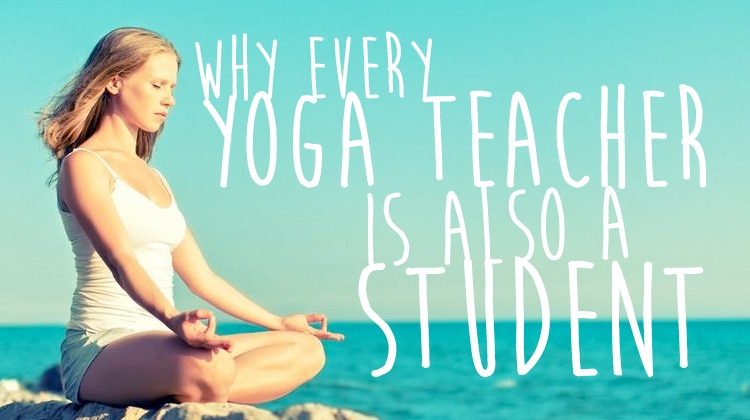 There are many habitual strategies I utilize to bolster my image in the world. I want to look good! Yoga class is no exception, even as a teacher! For example, whether I was teaching or taking a class, anytime a challenging pose was cued, I’d delay entering the posture for as long as possible to be sure I could hold it for a few extra moments at the end so everyone could see how solid I was in that pose. It’s weird that I can continue these habits and conveniently not acknowledge why I do them, but the fact that it feels gross to tell you about it is one reason–hard on the ego, but the truth can only emerge once conscious and curious awareness is used, and this is so healthy not only as an individual, but as one, especially a teacher, who has influence with others. Now as a teacher, it can of course be great to demonstrate your mastery in a pose, but it is the reason behind the demonstration that counts, and for me, that reason was often rooted in selfish ego stroking.

Yoga teachers often play the role of not only being a master of yoga, but a master of life. Dangerous! Another humbling truth I brought awareness to recently was to pretend to my students that my body no longer experiences aches and pains after a dozen years of yoga practice. As a yoga teacher, it seems that it would be a useful thing to project this idealized goal of a pain free and healthy body to your students, but if there’s dishonestly, it may have an adverse affect. I opened up at a recent class and told everyone that I had a weird neck spasm that has lasted for days and I didn’t have any explanation for it. Upon sharing I saw the class relax and let go. My honesty deepened their trust in me, and with trust, they could relax in to a greater honesty with themselves. They didn’t have to protect an image either. What a powerful way to begin a class!

Awareness breeds awareness, a similar image theme exposed itself to me while mountain biking. When climbing challenging hills with others around, I have always tried to hide how hard I was breathing. I am intentionally practicing shallow breathing to paint an inaccurate picture of myself to myself and others, which doesn’t do any of us any good! Lame, especially for a yoga teacher who champions unselfconscious breathing every yoga class!

If you’re having a hard time finding any of your own ego serving habits? Try asking a good friend, or better yet your significant other, the longer you’ve been with them the better! Would love to hear what they are, just in case I’ve been doing the same thing and just haven’t realized it yet!!