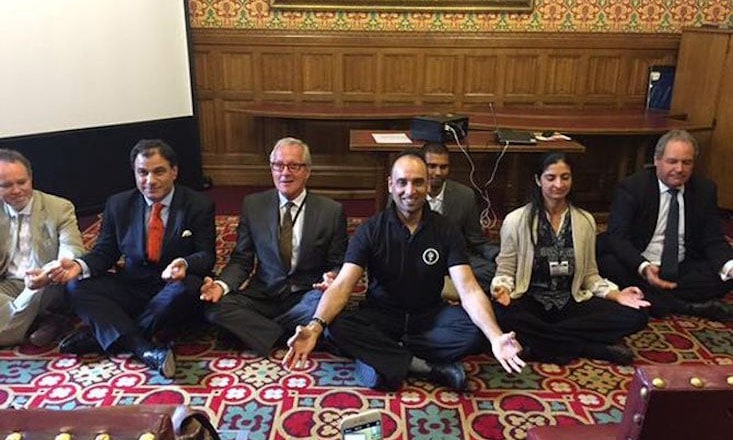 If you had been in one of the large rooms near the House of Lords in London’s historic Parliament building last Wednesday, you might have spotted several Lords participating in a 60-minute yoga session.

Lords on the Mats

According to NDTV, the session began with meditation, during which an audio-visual history of yoga was played in the background. Following this, they began with pranayama, following a yoga teacher through a series of breathing exercises.

The Lords attempted a variety of positions from Ardha Chandrasana to Vrikshasana, reports NDTV. The lesson was led by yoga instructor Neil Patel, who instructed the Parliamentarians on proper form and etiquette, reminding them not to kick their neighbors even if they didn’t belong to the same political party.

The yoga session was kickstarted by Indian-born Lord Karan Bilimoria as part of the U.K.’s International Yoga Day celebrations. Bilimoria praised India’s influence on the world, calling yoga a “shining example” of its “soft power.”

“Yoga is rapidly gaining in popularity around the world for its recognized benefits for wellbeing and mindfulness,” Bilimoria told Outlook India.

He joked that the Lords were well suited to yoga because they’re already in such good shape and in need of relaxation.

“We are very fit, you see,” Lord Bilimoria told NDTV. “We have just eight minutes from the time the bell goes to come and vote from wherever we are in the vast lobbies of this grand building. We run to make it…so this yoga session was very welcome.”

Other Lords agreed, saying that yoga was easier than they thought it would be. Patel called them “sports,” adding that they don’t need to attempt complicated asanas in order to stay in shape.

“A little bit of simple yoga a day would be good for inner peace and health,” he said.

Politicians experiencing inner peace? That could be just what the world needs!