Tips for Going and Staying Vegan (With Recipe)

I’m not vegan any more. After nearly two years of being one, my circumstances changed and it became hard for me to eat vegan and stay healthy. I started eating meat again, and my body actually thanked me for the change. I saw a vast improvement in my body composition and energy.

So, for anyone thinking I sat on my high horse promoting veganism as the be-all, end-all, rest assured that I am actually one of those who couldn’t stick to it. In fact, I enjoy eating meat more now than I ever did before I went vegan. I appreciate it more, always choose organic, and am far less wasteful.

In the Yoga Sutra, Patanjali outlines the meaning of ahimsa (non-violence), which suggests the practice of a vegetarian diet. Traditionally, a yoga teacher would strictly follow this practice. The debate as to whether a yogi can be a “yogi” but not vegan continues.

Being vegetarian or vegan is a commitment, because all of a sudden people are watching you and questioning you, just waiting for you to trip up and walk out wearing a leather belt or accidentally sip on some non-vegan wine (who knew that wine could notbe vegan?!).

All of a sudden, by labelling yourself as a veggie, you are open to attack from all bases: stay vegan and always be bombarded with “But why, what about the protein?” questions, or quit being vegan and be known as the quitter.

So here is my tip: do what is right for you and ignore the nitpickers. They don’t have any idea what they’re talking about because it’s your body, not theirs.

On that point, do you know what’s going on inside your body? Are you able to listen to its needs? There are two ways of leading a vegan lifestyle: the smart way, or the eat-nothing-but-rice-and-hummus way.

Being vegan can be hard, especially when you are always on the go or living with people who are not veggie-friendly.

It can be so easy to slip into an unhealthy way of vegan eating. In my experience, working long hours in an office and eating the same breakfast, lunch, and dinner of mango, greens, and copious amounts of hummus and nuts was far from smart nor sustainable.

Here are some fast facts, a few practical tips, and a recipe for you guys, whether you’re vegan or just feel like preparing a vegan-friendly meal tonight!

Tips for Going Vegan or Vegetarian

If you’re not vegan or vegetarian, I promise you that you won’t feel like you’re missing out on something meaty. Hearty and healthy food, particularly good if you’re on a diet but still want something wholesome. 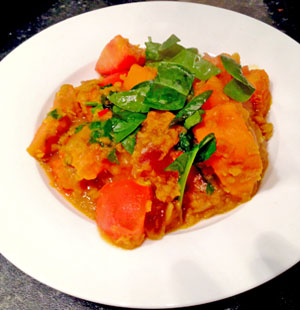 Keep this dish vegan friendly, or bake or dry-fry chicken or turkey in a separate pan to add to the dish later!