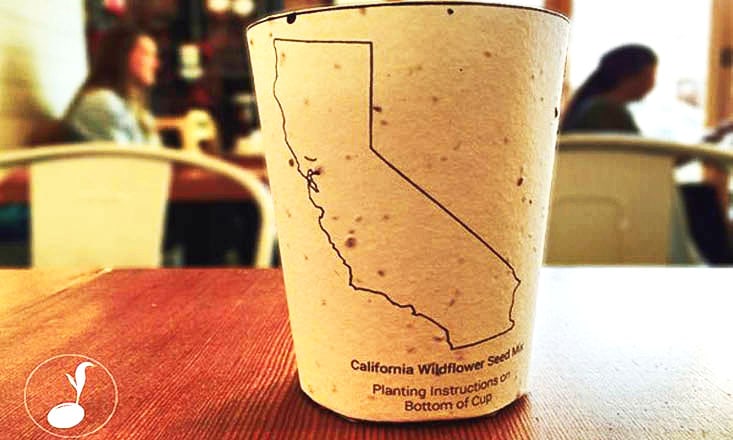 A recently funded Kickstarter campaign promises to bring something unique to the world of beverages with what is being called the world’s first plantable coffee cup.

The cups are made with post-consumer paper materials taken from local recycling centers. Fibers that are usually considered too tough to be reused in packaging products are formed into cups that can either be planted or composted—even if you throw one away, it will biodegrade within 180 days.

Reduce. Reuse. Grow. claims that once planted, its cups will be able to extract over 1 ton of carbon dioxide from the atmosphere each year.

So how exactly do these cups burst into bloom? It’s simple. Each cup is labeled with a seed variety (cups are made based on the location they’ll be sold in, so they’ll contain seeds native to your area no matter where you are).

Once you finish drinking your coffee, just unravel the cup, soak it in water for five minutes, and plant it. If you don’t feel like planting it but don’t want to just throw it away, Reduce. Reuse. Grow. encourages patrons to place their cups in a special trash can so the company can collect and plant them.

As the company points out, even recycling your coffee cups can be a futile effort, as the paper used in the cups can only be recycled about two to three times before the fibers become unusable and are taken to landfills. Plantable coffee cups could change that cycle of waste.

The company’s goal is to produce at least one tree from each coffee cup, and, according to Earth Porm, eventually create other seed-embedded packaging like takeout containers, corrugated boxes, and bio plastic.

So if the idea of drinking guilt-free coffee while planting trees and flowers appeals to you, look for plantable coffee cups to start spreading their seeds sometime this year!