The Transformative Power of Handstands 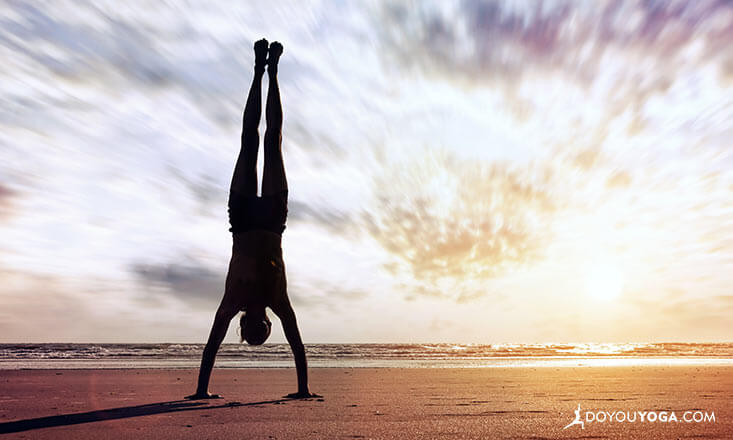 Handstands. Love ‘em or hate ‘em? For me, they were the bane of my life. For almost two years, I struggled and suffered.

In fairness, I wasn’t trying every day, but that was because my legs were so leaden, so far from rising off the floor, never mind over my head, that my attempts seemed doomed, futile, and depressing.

I did dream of rising up — I devoured every article I could find online about the “magic” tricks of how to achieve it (and like math, people who can do it aren’t good at explaining how to do it). I went to every Handstand class or workshop in the metropolitan area, and bruised my knees more than once using doorways and hallways as props.

I had a big birthday coming up, and desperately wanted to achieve a Handstand before then. Not least, as a yoga teacher, I was ashamed of my guilty secret: how could I teach something I couldn’t do myself?

I knew the problem was more emotional than mechanical: I had the strength and my balance has always been good. Headstand and Shoulderstand were fun and I’m keen on inversions generally for all their benefits, including mood improvement.

But once my head was off the ground, some connection cut out — my hip flexors or core went limp, and even teachers were shocked when they tried to give me a lift up — my legs were heavier than a dead weight, and time and again I’d see their optimistic faces snap into shock. I’m tall, but I don’t look that heavy!

Of course, Handstand invokes fear, and any time we did Handstands in classes where I was a student I would make my sad attempts and then curl up in Child's Pose, secretly weeping.

The feelings of failure, of not being good enough, of humiliation and shame, went way beyond that moment. Generally, if I can’t do something or fall out of a pose I’m more amused than bothered; those things mean you’re challenging yourself and exploring the edges, which is good. No, this triggered some far deeper and older emotions that clearly were always latent in my body, and that the Handstand dramatically revealed.

I speculated as to where the muscle might be that had gone to sleep and blocked the pathway between my mind and body, and reasoned that if I could someday fulfill the pose it could have a transformative effect, re-firing neural pathways that had shut down at some point. (And I wasn’t limiting this shut-down to trauma in this life — as a child, I had never achieved a cartwheel or any other upside-down gymnastics, yet Urdhva Dhanurasana — which we called crab — I did for pleasure.)

It seemed to me that I came into this body with whatever block I was now recognizing.

And then it happened. Not by accident. I was in a class and once again I was both thrilled and dismayed when the teacher announced Handstands. The woman next to me — also a teacher — grabbed a bolster and propped it vertically against the wall.

“I can only do it with this,” she said sheepishly. “Takes the fear out of it.” I copied her, but still no joy.

The following week before class began I tried this method again, and seeing my struggle, a kindly Iyengar teacher came over with a second bolster. “You need to be far enough away from the wall, “ she explained, and I could feel the eyes of the whole class, encouraging and hopeful, as once again I huffed and puffed and failed.

She added a foam pad and then, unable to bear my torment any longer, she caught my ankle as it lifted and helped me fire the legs up to the wall. (The class somehow resisted the opportunity to applaud — understandably, it wasn’t that big a deal to them.) But something had changed — she hadn’t had to bend her knees and brace herself as if lifting a small fridge. My body had actually contributed something to the effort.

The next day I was determined. I took three huge pillows and propped them against the wall of my bedroom and said I wasn’t leaving until I got up there. There seems to be magic in this kind of resolve — apparently the Buddha himself when under the Bodhi tree said “I’m not getting up until I’m enlightened.” The thing is, you have to really mean it.

Hoosh, ooof, hoosh — hurrah! By launching myself like a battering ram, my hips finally got the momentum to reach the wall over my head, and after that the legs went up easier. I succeeded on both sides, then collapsed in Savasana and wept like one of those marathon runners reaching the finish line, big heaving sobs of breath, until eventually my heart returned to normal.

I’d done it, and before my birthday, too!

I resolved that I would do a Handstand every day for the next year, to be certain that whatever blocks had severed my will and my body could be effectively dissolved. But here’s the kicker — for the next week, I was on an emotional roller-coaster like the worst PMS.

I was depressed, irritable, grief-stricken, heart-broken and eying up the potato chips. There was actually nothing wrong in my life — but all my self-doubt, fear, negative self-talk, despair, panic, and grief surged rampantly through my heart and head. I practiced every day, asana and pranayama and meditation, ate and slept well — but it wasn’t physical.

It took my partner to point it out: “ever since you did that Handstand you’re in some state.” And while it wasn’t meant as analysis, it was a Eureka moment. Yes! There is no mystery. Of course! It’s like a jar of dirty water: if it stands still long enough, the silt sinks to the bottom and you can’t see it. But shake the jar and all the water looks filthy.

For me, Handstand is like shaking the jar — all my dirt and demons rise to the surface. But unlike the dirty water, bringing them to the light of awareness releases them. The next day I woke up with a feeling of gratitude for how much I am loved.

I’ll keep doing Handstand every day, and sometimes weep “for no reason” as I walk the dog, but now I know that this is simply wringing out the sponge.

As the dust clears, how much space it opens for new light! Who knows what the actual source of all these emotions is? It’s irrelevant. The power of yoga is that we don’t need words, or a story, to make sense of experience. The wisdom of the body has its own power, and this thinking, wordy little brain can let the practice do its own healing.

Right now, I’m going to do a Handstand, take the dog to the park, and maybe have a good cry.

What emotions has Handstand brought up for you? Share your experiences with the rest of the community in the comments below!