The Story of the Loud Breather 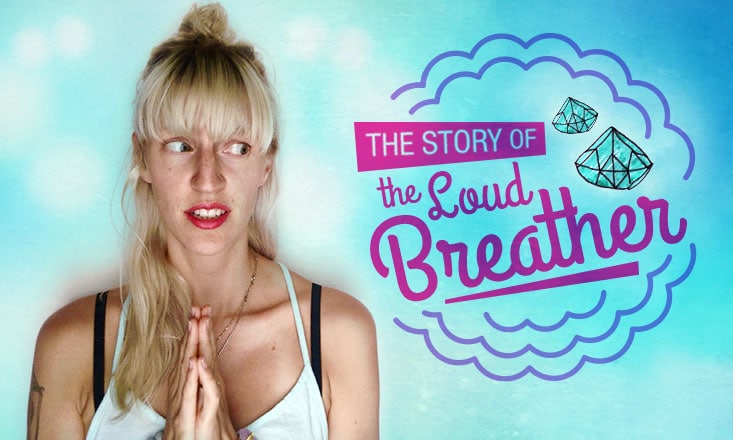 There was this guy I encountered a few years back who with every pose, every movement, every second of his yoga class existence, breathed as if he had just run a marathon, entirely up hill, while wearing a backpack full of cement AND a ball-gag.

Yes, I exaggerate, but he was really loud. I know, I know—I’m a yoga teacher and loud breathers aren’t supposed to bother me. I’m meant to be all “accepting” and “non-judgmental.”

I tried to act cool—but I couldn’t.

In an attempt to maintain this facade of equanimity, I never looked in The Loud Breather’s direction nor did I let my face give away that my brain was plotting his demise.

I kept flowing and pretending, rather smugly, that I was better than the other students in class who were forthright about firing daggers at him from the dark recesses of their souls. But OH MA GERD! My mind raced with every possible question. I just couldn’t leave The Loud Breather alone.

The Loud Breather was my obsession.

I crafted some pretty impressive and farfetched stories about him, and as a result spent an entire class fixated on his breathing instead of my own.

How funny is that?!

I could have chosen to reign myself in and stop the fixation, but instead, I chose to obsess over The Loud Breather. The best part is, I even did it with an air of superiority—acting as cool as a cucumber when, all the while, my internal cogs of anger were spinning at full velocity.

Looking back now, it makes me laugh a real LOL to think of how pissed I was. There are so many wonderful lessons in this story and I want to share my favourites with you.

Here’s what The Loud Breather taught me.

For starters, my fixation on The Loud Breather was a choice. It didn’t have to be like that. I could have let the initial irritation slide, but instead, I built an entire world inside my head about this silly little thing: a man breathing loudly in yoga class. What a foolish thing to do.

Instead of seeing The Loud Breather as another player in this weird symphony of life, I turned him into an intruder—some streaker who didn’t belong and who was ruining my show.

I think it would have been nicer for us both if I had given him the part of the epic tuba solo. I definitely would have liked him better if I had changed what role I assigned him.

Something that I find helps me mega nowadays when I encounter situations reminiscent of The Loud Breather is to use my brain power to create love for others instead of daggers. Sure, daggers are a lot easier, especially when it seems like someone is streaking across the stage of your life.

But nobody ever benefits from daggers—not me, not you, and not The Loud Breather, either.