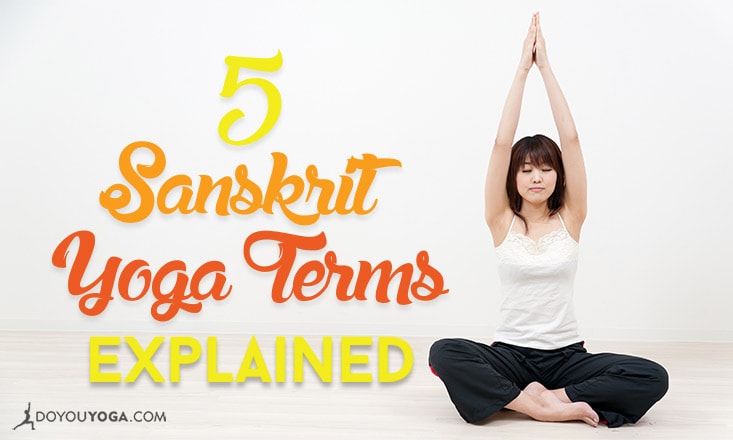 When I first started practicing yoga, I’d hear during class what I referred to as the “language of yoga.” I knew it was a foreign language, but the source of this language and the meaning of these words were things I never bothered to explore.

I’d just roll my eyes thinking, “I have no clue what you’re saying, just say it in plain English.” But, as my connection to and interest in yoga grew, I realized that language is so much a part of yoga, its history, and its intent.

As some of you may know, the roots of yoga run deep in Northern Indian culture, which is why the language of yoga is steeped in Sanskrit, one of the oldest, most traditional languages in India.

Sanskrit is not an easy language to learn, and even today, some believe it’s only a written language and not really a spoken language. Yet, in yoga, Sanskrit is spoken. While used more heavily in some forms of yoga and almost not at all in others, its influence remains across all forms.

Here’s a quick intro into some commonly heard Sanskrit yoga terms. With a deeper understanding of Sanskrit as it’s used in yoga, you may find your practice deepen as well.

Broken down, Pranayama comes from the words “prana,” meaning breath or life force, and “ayama” meaning to stretch or extend. Put them together and you have ’extended breath.’

Different pranayama techniques are used in different forms of yoga and meditation practice. Multiple books have been written on pranayama, so a brief paragraph here can’t begin to scathe the surface, but at least you now know what it means.

Why is it so important? Breathing, as yogis find, is crucial to so many parts of yoga, from breathing through discomfort in postures until you reach steadiness and ease, to breathing in order to circulate the energy or heat throughout the body.

You’ll most certainly have classes teaching some form of pranayama or another.

How many times have you practiced yoga and heard the teacher say something like, “Gaze off the tip of your nose” in Mountain Pose, or “Gaze off the fingertips” in Warrior II? Or if they like to toss in Sanskrit, they might instead say “nasagre drishti,” or “hastagrahe drishti,” respectively.

While the location might be more difficult to grasp, at least now you know that drishti means ‘gaze.’

The gaze typically doesn’t change for a particular pose, meaning, in Warrior II, it will always be off the tips of the fingers or hastagrahe, so once you learn that in English, you’ll still know where to look when you hear it in Sanskrit.

Why is it so important? Drishti is key to maintaining concentration in yoga. The specified direction also will help you possibly reach an edge in a pose—try doing Half Moon looking down, then try doing Half Moon gazing up through the fingertips of the extended arm.

You’ll feel your body shift as the gaze changes, not just in this pose, but in so many others as well.

Bandhas are body locks, which are another tool to aid in focus and concentration by channeling the breath and energy throughout the body.

The three key bandhas in yoga are mula bandha, uddiyana bandha, and jalandhara bandha. The mula bandha (root or pelvic floor lock) and uddiyana bandha (abdominal lock) work together to form a closed circuit energy lock to keep and circulate energy and strength throughout the practice.

The jalandhara bandha is a throat lock typically performed when practicing specific breathing exercises. Study up on this one because it’s also a quick fix for stress or anger management.

Why is it so important? The purpose of practicing yoga is to find a union between mind, body, and spirit. And two keys to doing that outside of practicing asana (postures) are engaging an inward focus and energy, which the bandhas allow you to do.

Asana means pose or posture. While most people believe that the poses in and of themselves are yoga, asana are really just ONE of the eight limbs of yoga. Asana can be sitting still in meditation (Lotus) or striking a Warrior I, II, or Half Moon.

Why is it so important? The benefits are countless, but include the more obvious ones such as improving flexibility, strength, and balance, reducing pain and stress, healing, or management of many physical and mental ailments.

It’s the physical benefits that often lead people to the asana limb of yoga, but students begin pursuing other limbs as their practice deepens.

This term is probably the easiest to figure out. It’s the whipped cream on top of a hard hour of practice. Savasana or Corpse Pose is the final relaxation asana in the sequence but, although you might have thought so, it doesn’t mean naptime.

In this pose, you’re lying on your back, eyes closed, feet to the corners of your mat, arms at your side with the palms up.

You might be tempted to catch a few winks, but this is really a time for you to reflect on things like the intention for that day’s practice, or any discoveries that the practice may have brought to light.

Why is it so important? Aside from the importance of reflection, this is a time of recovery for the body and all that you’ve just put it through for the last hour or more. Your body needs to be able to just breathe and realize that the intensity is over.

The best description I’ve ever heard was calling it integration… a few moments to really seal in the mind-body connection.

The language of yoga goes on and on; these are just a few basic terms you’ll hear. Don’t be like me and let Sanskrit frighten you off, hopefully it will pique your interest to learn more and explore all the limbs of yoga.