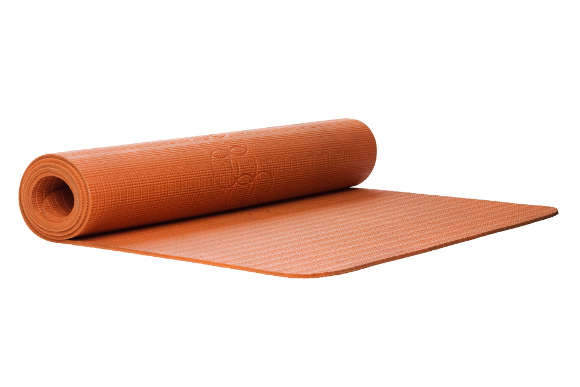 Do a quick search online for yoga mat reviews and without a doubt you will find a Gaiam yoga mat listed among the top-ranking yoga mats. This is because Gaiam has earned its reputation of making only the best yoga mat varieties at an affordable price. Of course you'll be able to find cheap yoga mats that won't cost you any more than $5, but if you're doing yoga long-term, you should invest in a yoga mat that will last you for decades. Here are some factors and tips to keep in mind if you're shopping for a Gaiam yoga mat.

The thickness of a yoga mat is considered by many as their primary deciding factor in choosing which mat to buy. Contrary to popular belief, the thickest yoga mat doesn't automatically translate to being the best yoga mat. Rather, you should be looking at the density of materials that should give it the right amount of cushion and spring. The thickest Gaiam yoga mat measures 8mm and is generally recommended for beginners who haven't been too active and thus more prone to experiencing pain and pressure on the knees and back.

Some intermediate to advanced students prefer thinner yoga mats (especially when meditating) because it makes them feel more connected to the earth. Lying down on a thin yoga mat still gives you firm back support and you don't feel as if you're lifted off the ground. If you've been using a thin yoga mat but feel discomfort on your knees and sit bone when doing kneeling and sitting poses, consider going for a Gaiam yoga mat that has the right balance of firmness and thickness.

Weight and portability are important considerations especially for those who spend a lot of time travelling either for leisure or work, and like to bring their yoga practice with them wherever they go. Almost all travel-friendly yoga mats tend to be quite thin so they are lighter to carry around, which is why some yogis also use a yoga mat towel to add cushion. The thinner, more travel-friendly yoga mats offered by Gaiam fold or roll up for quick and easy storage in your yoga mat bag. Gaiam has a reversible travel yoga mat that sells for $25-$30 and comes in a variety of color combinations.

Gaiam yoga mat designs differ in surface texture, although all of their yoga mat offerings have a good level of slip-resistance. The traction you will get on your yoga mat depends largely on the texture and stickiness of the mat, and these are important things to consider especially if you are doing more fast-paced and physically demanding styles of yoga. There are Gaiam yoga mat models that have a channel texture which provides better traction, such as the 3-mm Meadow Yoga Mat and Maya Yoga Mat, which is also 3-mm thick.

The typical and lower priced Gaiam yoga mat is made of PVC or to put it in more simple terms – vinyl. While a lot of yoga students and instructors prefer yoga mats made of natural rubber, some still prefer PVC because it's a tried and tested material for making sticky yoga mats. Also, people who are allergic to latex should avoid rubber-based yoga mats. If eco-friendliness is an important factor for you in choosing a yoga mat, you can go for yoga mats that make use of natural or organic cotton. Just prepare to shell out more money because these cost quite a bit more than the popular sticky yoga mats offered by Gaiam.

While most yoga students couldn't care less about the color and print of their Gaiam yoga mat, Gaiam still makes sure that the different tastes and preferences of their clients are met by offering mats in a wide array of colors and patterns. Their reversible mats are popular not just because of dual functionality (some have PVC on one side, microfiber on the other), but also because you get two color options in one mat. There are also Gaiam yoga mats with beautiful patterns (e.g. Tree of Life Yoga Mat, Zen Garden Yoga Mat, Prosperity Yoga Mat, Chakra Yoga Mat, etc.) which would benefit those who draw inspiration from aesthetic beauty.

The Gaiam yoga mat styles made of natural cotton sell for a lot higher than your typical sticky yoga mat, with a price range of $75 to $90 depending on where you buy it. Gaiam's travel yoga mats typically sell for $20-$30 and some retailers already bundle them with a handy yoga mat bag. The Gaiam yoga mat that are popular among music lovers is the Audio Yoga Mat, which has a speaker in one corner that you can connect your iPod to so you can have yoga music playing while you do poses. This yoga mat sells for $25 to $30, depending on the retailer.

Finding a Gaiam yoga mat that works best for you should be easy now that you know the different aspects and features to look for. Now it's just up to you to weigh these aspects and choose according to what's most important to you – be it style and pattern, portability, stickiness and texture, thickness, etc.