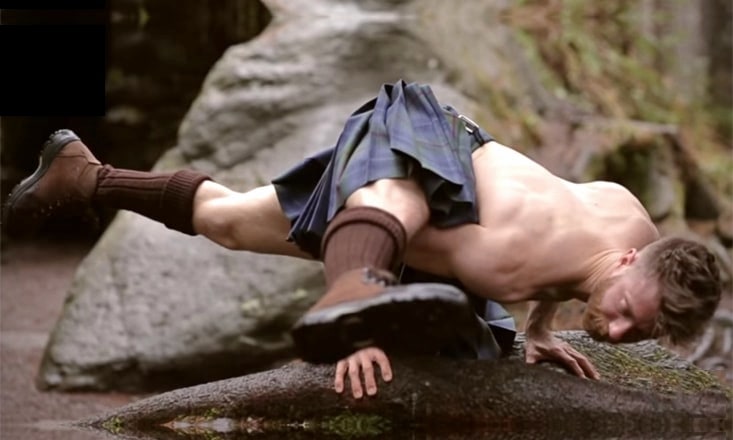 You may recognize Finlay Wilson as the amazing kilted yoga teacher whose inspirational video recently went insanely viral. In this video, he and his student, Tristan Cameron-Harper, donned traditional Scottish attire and headed to the Highlands to show off their incredible skills.

Unfortunately, the beauty and positivity of this video has not been matched by all of its viewers. After receiving more than 50 million views on his video, Finlay was recently the target of homophobic death threats—including a threatening letter left on his front doorstep.

The horrifying letter claimed the writer had been watching him for some time. “I was warned in this letter that I should leave my home, along with me and my dog, because I was gay,” he said.

There are no words that can adequately describe how awful it is that Finlay received these threats. The fact that this beautiful video was met with hate is a tragedy for both the yoga community and the world. Finlay was understandably afraid when he first received this letter. However, he says, ‘now I am furious, because someone’s aim is to intimidate me and terrorise[!sic!] me into leaving my home because of their own bigoted beliefs.”

Just as his video was a ray of joy and light for more than 50 million viewers, Finlay’s response to these threats gives us all a reason to have hope. “The people who do this sort of thing need to know that their views are unacceptable and the majority of people won’t tolerate it,” he said in an interview with BBC Scotland.

He urges anyone who has experienced homophobic threats or harassment to report it to the authorities. Wilson himself did exactly that. The threat is now being investigated by Scottish police as the hate crime that it truly is. With any luck, the perpetrators will soon be brought to justice.

The silver lining to this upsetting story is the outpouring of support that Finlay has received from his fans. Even so, the tragic truth is that homophobia is still all too common in this world. In his response to the threat, Finlay leaves us with an important reminder:

“The evil in the world only survives when good people stand by and do and say nothing.” It’s everyone’s job to fight homophobia. We hope that all of us in the yoga community will harness the strength and positivity of our practice to do exactly that.