The 6 Branches of Yoga 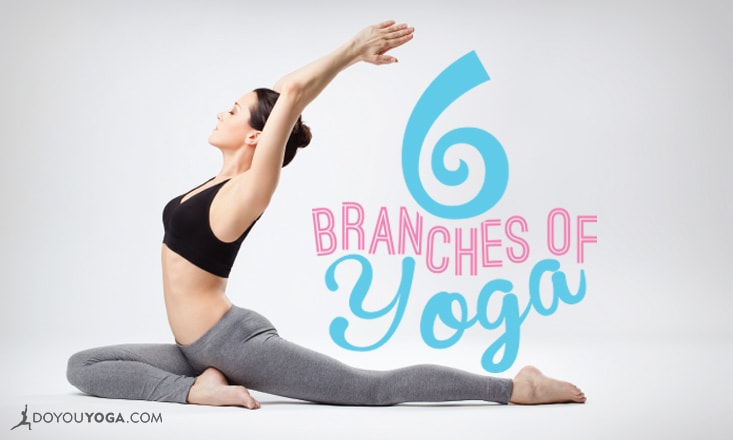 The physical practice of yoga postures, however, which is known as hatha yoga, is just a small window into the larger world of yoga—it just happens to be the window through which most of us were introduced to it. But what if you aren’t that into physical exercise? You can still love yoga.

In fact, some of the most devoted yogis I know don’t have a hatha yoga practice. In the same way, you don’t have to be devotedly spiritual to enjoy yoga and its benefits.

Yoga can really be customized to your wants, needs and lifestyle, and there’s an entire vast and comprehensive tradition to choose from (not to mention a plethora of styles and classes).

Aside from hatha yoga, there are five other main practices in the yoga tradition—together they are the six branches of yoga. Taken separately or apart (you’ll notice some even overlap), they are considered paths of personal and spiritual development within yoga.

Raja yoga focuses on meditation and contemplation in order to fully realize the self. Known as the royal (Raja) or king path of yoga, it is based on the eight-limbed path toward self-realization outlined in Patanjali’s Yoga Sutra, and tends to attract the more spiritually devoted practitioners.

Bhakti yoga is the path of devotion, emphasizing devotional love for and surrender to God.

By seeing the Divine in everyone and everywhere, Bhakti yoga cultivates acceptance, tolerance, and love for all beings. Bhakti yoga also involves a lot of chanting and kirtan (call and response) that evokes feelings of love, connection, and bliss.

Jnana yoga is the path of wisdom and knowledge (Jnana), involving disciplined study of scriptures and constant inquiry into the nature of self. Often called the yoga of the mind, Jnana yoga is well suited for the more intellectually inclined.

Karma yoga is the path of selfless action, the yoga of doing. Selfless service is the heart of karma yoga. Remaining completely detached from the outcome of their actions, Karma yogis are in continual service to the betterment of all beings with no intention of physical gain.

Mantra yoga is the yoga of sound. Considered sacred utterances, mantras are syllables, words, or phrases representing a particular attribute of the Divine. Mantra yoga is the practice of becoming centered through the repetition of mantras.

Hatha yoga is the practice of yoga postures, or asana, using the body as a vehicle for self-transformation.

Now that you’ve been introduced to all of the branches of yoga, are there any that resonated with you that you’d love to explore more? Let us know!