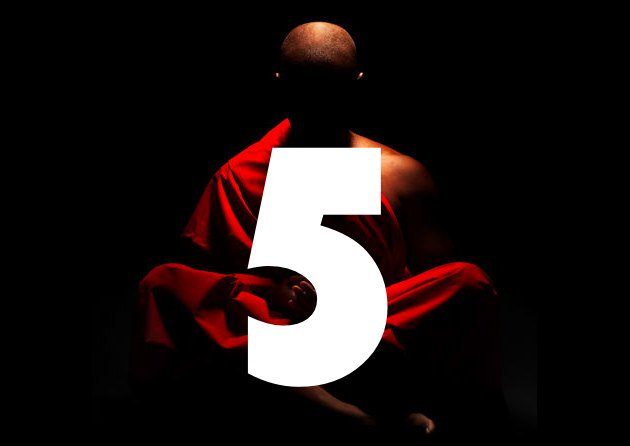 The Five Tibetan Rites are five simple kriyas (movements through two or more poses) that can be completed in less than 20 minutes and will help you live the long healthy, vigorous life of a Tibetan Monk. Just look at the Dalai Lama, who doesn’t want to look as young, vigorous and happy as he is!

The Five Tibetan Rites, the Five Tibetans or the Fountain of Youth exercises as they are often referred to, are considered to be over 2,500 years old. Think of that! We are now in the 2013, so they are older than our current time keeping by almost 500 years!

Their origins in the west are based on a book by Peter Kelder published in 1939 entitled The Eye of Revelation. In this book Kelder claims to have met a retired British army colonel who shared stories of living in a Tibetan Temple (Lamasery) learning from Tibetan monks (Lamas).

The five sets of movements in modern yoga terms would be considered a vinyasa flow. Vinyasa is described as two or more asanas (poses) strung together with a transition that turns the poses into dance or tai chi like movements.

The British army officer, Colonel Bradford (not his real name BTW, it’s a pseudonym, but who wouldn’t want to be known as the inventor of the Fountain of Youth?), describes traveling in Tibet where he met lamas who taught him the rhythmic movements that aided the lamas in living a healthy, vigorous, long life. Although Colonel Bradford is said to have brought these rites to the west after WWI, they have recently seen a great renewal in interest. Dr. Oz has touted the benefits of the Rites on his TV show as well as numerous other health related magazines and books.

Benefits of the Five Tibetan Rites

Chris Kilham, a yoga teacher who wrote The Five Tibetans (Healing Arts Press, 1994) states regarding the origins of the practice, "Perhaps they come from Nepal or northern India…As the story has it, they were shared by Tibetan lamas; beyond that I know nothing of their history. Personally, I think these exercises are most likely Tibetan in origin. The issue at hand, though, is not the lineage of the Five Tibetans. The point is [!their!] immense potential value for those who will clear 10 minutes a day to practice."

Whatever the origins of the practice are, the Five Rites are potent in their intensity. If done properly and with breath and intent, the rites can bring about great change in the body and mind.

Start slowly if you have not been practicing a vigorous exercise or yoga program. As always ask a physician if you have any question as to your health in relation to any new exercise regime. If you are overweight or have been inactive for a period, do not do Rites #4 and #5 until you have developed some strength and endurance.

The maximum number of repetitions of each exercise is 21. It is recommended never to do more than 21 repetitions in a single day as this can affect your chakras negatively and create imbalances in your body. If you are doing less than the maximum 21, try to end on an odd number as this is supposed to help with chakra alignment.

Remember your breath is the key to every movement in yoga. Move with your breath, inhaling on the exertion and exhaling on the release. Also there are variations or modifications to each of these poses that will make every body able to complete these exercises in some form.

Stand erect with arms out to the side, horizontal to the floor, palm down. Alternatively lift your index finger and keep your eyes on it as you spin. This helps with the potential dizziness. Start to spin in whichever direction your body and mind feel most comfortable. Counting your rotations, stop on an odd number when you begin to become dizzy or complete all 21 rotations.

Lie flat on the floor, face up, palms on the floor. Lift your head and tuck your chin to your chest. As you lift your chin, raise your legs vertically, knees straight, feet flexed. Slowly lower your legs and head back to the prone position. Repeat up to 21 times, timing your breath to the movement.

Kneel on the floor with your toes curled under and your forehead tucked down toward your knees. Arch your back and tuck your belly button up toward your spine (Rabbit Pose). Slowly lift your chest and extend out through your head as you use your abdominal muscles to bring your body erect. Place your palms on the top of your buttocks muscles keeping some pressure there to remind yourself to extend through your spine. Lower your head back while extending and opening through your quadriceps, belly and chest (Camel Pose). Inhale and lift up through your chest as you return to an erect position. Move forward to Rabbit, etc. back and forth through up to 21 repetitions.

Sit on the floor with your legs straight out in front of you and your feet about hip width apart (Staff Pose). Your palms are on the floor and your fingers are facing toward your feet. Tuck your chin to your chest, drop your head back and raise your body so that your knees bend while your arms remain straight. You should look like a a table (or upside down table pose). Alternatively, you can come to upward plank pose which leaves your knees straight while lifting the center of your body into an upward facing plank or an upside down push up. Another modification would be to come to bridge pose. Remember to use your ujjayi breath as these are tough! Complete 21 repetitions or end on an odd number.

These are two standard yoga poses that are done in almost every yoga class. You have all completed these two wonderful poses many, many times. Flow through the poses back and forth concentrating on your breath and alignment. Alternatively you could do upward puppy (upward dog while keeping the tops of your legs on the ground) to child's pose. Which feels fabulous on your spine. And of course you could combine these four sets of poses for a total of 21.